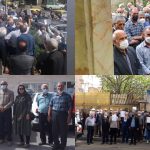 Written by Mohsen Aboutalebi on April 16, 2022. Posted in NEWS 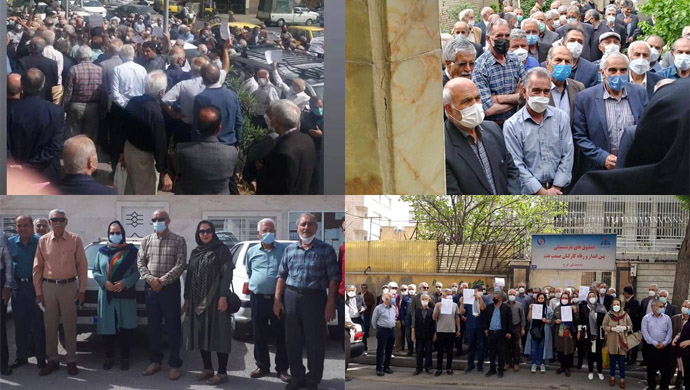 Protests by people from all walks of life in Iran cause for increasing concerns for regime officials.

As the Iranian calendar season came to an end, the new year began with a new round of protests in cities all over the country by people from all walks of life. In the last few days, there have been reports of Social Security Organization retirees rallying in 11 different cities; telecommunications retirees protesting for their rights in several cities; nurses, medical students, and dentistry residents protesting for better conditions in Tehran, Shiraz, Yazd, and Hamedan; employees of state oil companies and other factories protesting in Isfahan province, and so on.

These latest protests reflect current conditions in Iran, where the middle class has all but vanished and the lower class is expanding at an unprecedented rate. As a result of poverty, misery, and repression, all of Iran’s society has banded together against the ruling regime, forming a massive front against the mullahs. This also shows how the conditions are ripe for a new round of nationwide protests, which could easily grow into a movement even more revolutionary than the November 2019 uprising, which shook the regime to its core and forced regime Supreme Leader Ali Khamenei to order the massacre of over 1,500 protesters in a matter of days.

Officials in the regime are particularly concerned about the country’s middle class collapsing, with more people joining the growing ranks of unemployed who are barely scraping by and have nothing to lose. More Iranians are realizing that the mullahs’ regime is to blame for the current state of affairs.

As the pressure on the Iranian people grows, the corrupt regime becomes more entrenched within its ranks and refuses to respond to even the most basic demands made by the people. Khamenei specifically stated in his Nowruz address that any oil revenue surpluses resulting from rising global oil prices should not be allocated to the people’s “welfare and recreation,” as this would “waste the country’s fundamental resources.”

“We need to strengthen our foundations,” Khamenei said, implying that the regime should continue to invest in its nuclear weapons program, advance its missile programs, and fuel regional terrorism while beefing up the crackdown apparatus against an increasingly restive Iranian society. These are the main pillars that support Khamenei’s regime and thus define his priorities.

To this end, the regime plans to use an iron fist and state propaganda to address the people’s demands. This includes a recent increase in the number of executions and arrests, as well as increased funding for the regime’s security forces.

According to a piece published on April 10 in the state-run Farhikhtegan daily, “the entire budget has been increased by nearly 1.28 quadrillion rials, reaching 37.59 quadrillion rials.” The total comes to around $135.7 billion. It’s interesting to see how the $4.62 billion increase is distributed among the regime’s various institutions and apparatus.

The budget of the “Islamic Development Organization,” which promotes the regime’s devious ideology and, in particular, propaganda against the Iranian opposition People’s Mojahedin of Iran (PMOI/MEK), has increased by 156 percent.

The budget for the regime’s Majlis (parliament) has been increased by 59 percent. The ultraconservative Guardian Council, which is in charge of amending all laws with Khamenei’s approval, received a 42 percent budget boost. Meanwhile, the Ministry of Education has seen its budget increase by only 8%.

It’s worth noting that regime officials and state media are always sounding the alarm about society’s volatile state. In an open session on April 12, Majlis member Amangholidj Shadmehr said, “The people’s economic patience has reached its limits,” adding that senior regime officials should “prevent a catastrophe in the new Iranian calendar year [from March 2022 to March 2023].”

April 12 – Isfahan, central #Iran
Local farmers protesting and voicing their grievances over the regime's corrupt policies, and demanding their fare share of water for their lands.#IranProtests #اعتراضات_سراسریpic.twitter.com/AlTfWdcMh7

However, like all other dictators before him, Khamenei believes that by increasing the number of executions and expanding crackdown measures across Iran, he can contain the country’s escalating protests. Such an approach, as history has shown, will only fuel a nation’s rage against the ruling system.