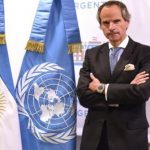 (PMOI / MEK Iran) and (NCRI): Grossi, a 58-year-old career diplomat from Argentina who worked as a senior IAEA official from 2010 to 2013, said he “already knows some of the main decision-makers in Iran.”

The chief of the International Atomic Energy Agency admitted in a recent interview with NBC News that monitoring at an Iranian nuclear site in Karaj has not been possible since surveillance equipment was damaged.

9 kg of plutonium per year, enough for a weapon

Arak Reactor gave the dictatorship 9 kg of plutonium per year, enough for a weapon, according to Mahmoud Nabaviyan, a member of the Special Commission for the Investigation of the Joint Comprehensive Plan of Action (JCPOA) and a member of the board of the regime’s parliament’s Article-90 Commission.

“How critical is the [Arak] reactor to us?” Each year, it generated 9 kilogrammes of plutonium, enough for a bomb… Countries can make a weapon with three to seven kg of plutonium depending on their technology. An interview with state television on October 17, claimed, “Having such a reactor would send a message to Israel that if you make a mistake against Iran, we have what we need [to retaliate].”

(PMOI / MEK Iran) and (NCRI): The Iranian regime announced that it will begin the next phase of its rollback to the 2015 Joint Comprehensive Plan of Action (JCPOA) known as the Iran Deal- June 17, 2019.

Grossi validated the regime’s nuclear extortion in May, saying that Iran’s continuous violations had made the initial criteria “impossible” to meet. “Iran has accumulated knowledge, centrifuges, and material,” he noted, before recommending an alternative or supplemental accord to meet the new challenges that have arisen.

Grossi’s public scepticism surfaced just days before the release of a quarterly IAEA report, and his NBC interview aired just days after representatives from the US and the JCPOA’s three European signatories met in Paris to discuss what collective action they might take if the Iranian regime continues to postpone the resumption of talks that had been scheduled for June in Vienna, with the goal of resolving the nuclear standoff.

Despite this, the world community has bowed to the mullahs’ nuclear extortion campaign rather than adopting a hard strategy against the regime and penalising Tehran for its aggressive activities. Grossi personally reached an agreement with Tehran in February to save the nuclear monitors from being deported from the country. Tehran, however, denied the IAEA access to surveillance equipment.

Grossi later stated that the dictatorship never followed through on this commitment. However, by coming to an agreement with the IAEA, Tehran avoided possible IAEA Board of Governor’s countermeasures in September, which might have major consequences for the regime.

Despite the regime’s continued violations of the agreement, EU foreign policy chief Josep Borrell stated publicly that he is “optimistic” about the chances of the JCPOA being restored. Borrell, on the other hand, claimed that he did not want to consider an alternative to the current method since “no… Plan B that I could imagine would be a good one.”

When Tehran stated that it would not comply with any of the JCPOA’s provisions last year, the governments of the United Kingdom, France, and Germany activated a dispute resolution system that should have resulted in all international sanctions against Iran “snapping back” if no resolution could be reached within a few months.

(NCRI) and (PMOI / MEK Iran): The National Council of Resistance of Iran (NCRI), and the People’s Mojahedin Organization of Iran (PMOI / MEK Iran) reported that Iran had started to enrich uranium to 20% at its Fordow nuclear site before the Islamic Revolutionary Guard Corps (IRGC) last Monday illegally hijacked a South Korean ship in the Persian Gulf.

Despite Borrell’s statements that restoring the JCPOA would allow the international community to control the regime’s nuclear programme, Tehran’s rapid advances in enriching uranium well beyond what the JCPOA allowed reveals the agreement is severely dysfunctional. In other words, the 2015 nuclear deal has never been able to effectively control the regime’s nuclear programme.

Tehran is now playing cat and mouse with the western powers.  When it becomes clear that the international community is exerting even the tiniest pressure, Tehran asks for dialogue and cuts deals with the IAEA to buy time.

By letting Tehran drag its feet on discussions, the international community is allowing the regime to pursue its aim of acquiring a nuclear weapon. Reinstating six UN Security Council resolutions, entirely suspending enrichment, and everywhere, anytime inspections are critical in preventing the government from gaining a nuclear weapon, as the Iranian Resistance has consistently declared.