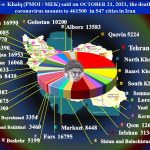 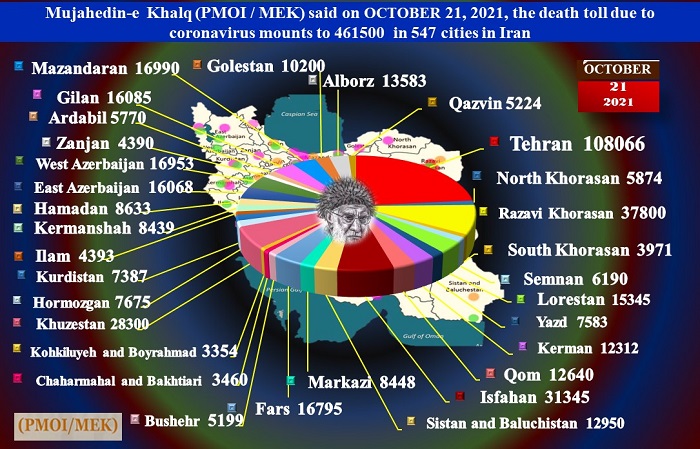 As of Thursday, October 21, approximately 461,500 people had died as a result of the Covid-19 Outbreak, according to the People’s Mojahedin of Iran (PMOI / MEK Iran). On the contrary, the Iranian regime’s manufactured data released on Sunday, claims the death toll has reached 125,000, with a total number of cases surpassing six million. Meanwhile, rising case counts indicate that a “sixth wave” of infections is on the way.

The regime’s brutal policies and practices

The current scenario is the result of the regime’s brutal policies and practices, which are overseen by the regime’s Supreme Leader Ali Khamenei.

The most notable of these was Khamenei’s decision in January to ban the import of Covid-19 vaccinations from Western sources in favor of domestically made vaccines.

Khamenei’s decision to ban the import of Covid-19 vaccine

Those alternatives have been shown to be ineffective and less carefully reviewed than immunizations recommended by the World Health Organization, with the latter including a characteristic that leaves the door open not just for the vaccine’s failure but also for the widespread emergence of serious adverse effects.

The Homemade vaccine project’s had been questioned

According to recent reports, both of these outcomes have been achieved using the domestically manufactured alternative to WHO-approved vaccines. The state-run newspaper Hamdeli published an article on Wednesday by health expert Mohammad Reza Mahboubfar claiming that the COVIran Barekat vaccine was no longer being administered and that the project for its production and dissemination had been shut down due to reports of side effects and a lack of public trust in its efficacy.

Despite the fact that the project’s efficacy had been questioned since the beginning, and with the government continuing enforcing Khamenei’s prohibition on foreign imports, the decision was made to speed up manufacturing of 50 million doses in the first half of 2021. The country fell far short of its goal, and authorities appeared to weaken enforcement of the import restriction on at least one occasion to make up for the loss. The restriction has been enforced in recent weeks, but with the failure of the Barekat alternative and the announcement of new foreign donations, it appears to be falling once more.

The Barkat Pharmaceuticals Holding Company, which is managed by the Execution of Imam Khomeini’s Order (EIKO), manufactured the Barekat Covid-19 vaccine. Ali Khamenei, the regime’s Supreme Leader, is in charge of EIKO.

Because the Barekat vaccine is completely ineffective, Iran’s already low immunization rates will continue to decline as people realize, they require access to an imported substitute.

Meanwhile, the possibility of those supplies will cast doubt on Tehran’s previous talking points, which frequently ignored Khamenei’s ban in order to argue that US sanctions were preventing Iran from acquiring effective vaccine doses. Even before Khamenei’s prohibition took effect, this assertion was debunked, with international groups in charge of vaccine distribution verifying that the US Treasury Department had granted Iran licenses to acquire vaccines from any country.

Such views highlight the reality that if it had not been for the regime’s actions, Iran could have responded to the public health problem far more promptly and adequately. And, according to the MEK’s figures, doing so could have saved tens of thousands of lives since the beginning of the year.