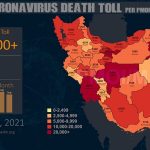 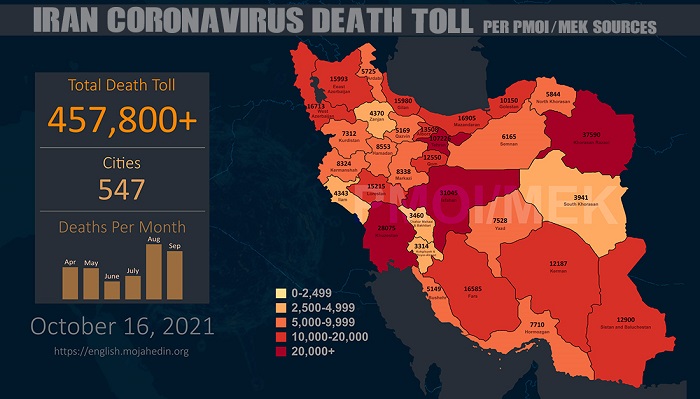 The Iranian regime continues to downplay the seriousness of the Covid-19 outbreak in Iran, claiming that the death toll has now surpassed 122,000 people. The actual death toll, according to research by the People’s Mujahedin of Iran (PMOI / MEK Iran), is approximately four times the official amount, at over 457,800.

The MEK’s estimations were compiled through their wide network of individuals, who were able to gain access to reports and leaked records from medical facilities, morgues, and government organizations all around Iran. They’ve also spoken with medical specialists who recognize that the pandemic’s scope is significantly more than the regime claims. The regime’s deception began even before the virus reached its pinnacle in Iran.

By the time the authorities admitted there had been even one case of coronavirus infection in Iran, some areas had already become quite dangerous. As a result, there was a clear discrepancy between regime officials’ assertions.

Morgues in the city of Qom were already at capacity in February 2020, when the regime’s Health Ministry claimed that the death toll in Iran from Covid-19 was still in the single digits.

Even though records obtained by the Iranian Resistance from the National Emergency Organization later proved this to be incorrect, then-president Hassan Rouhani stated that the regime did not delay the disclosure that the coronavirus was present in Iran.

Those announcements would have been postponed even longer if evidence indicated that the fake parliamentary elections in February 2020 would be boycotted on a substantial scale. Tehran, on the other hand, had denied the presence of Covid-19 prior to the sham election in order to spread similar lies.

(PMOI / MEK Iran) and (NCRI): COVID-19 fatalities in 547 cities exceed 457,800. Tehran is in crisis as long as we don’t have a national system to evaluate mutated viruses, we will always be facing threats and we need to definitely provide measures to have an immediate and timely response,” said a senior health official in Tehran.

The pandemic was destroying Iran

Despite the fact that the pandemic was destroying Iran at the time, the regime scheduled celebrations to mark the 40th anniversary of its coming to power, making attendance mandatory for many government personnel, regardless of their health or safety.

More recently, the dictatorship urged Iranians to celebrate the Shiite holy holiday of Arbaeen, despite the regime’s Supreme Leader Ali Khamenei opting to celebrate secretly to safeguard his health.

Ebrahim Raisi, the regime’s new president, has aided the protests this week by misrepresenting the vaccination rate, falsely saying that 70% of the population is protected against the virus when his own Health Ministry claims that the proportion is barely 20%.

America or Europe vaccine on the underground market

Those who couldn’t afford or weren’t well connected enough to receive vaccines created in America or Europe on the underground market had no choice but to take domestically produced vaccines, the efficacy of which is debatable.

Instead of pressing for homegrown alternatives to be pushed through while receiving less-effective vaccines from Russia and China, Khamenei banned the import of American and European vaccines in January. While the authorities temporarily removed the embargo on more credible vaccines when the fifth coronavirus outbreak hit Iran, it has already been reinstated.

“If new variants of the virus enter the country and these variants cause an increase in infections,” the deputy dean of Iran Medical Services University told the Iranian Student News Agency, “we might be faced with a sixth peak that is even worse than the previous one.”

Mrs. Maryam Rajavi the President-elect of the National Council of Resistance of Iran’s (NCRI): Khamenei does not value Iranian people’s life and health. Vaccine bans from the US and France, failure to provide for deprived people, and withholding the wages of the medical staff, form part of the regime’s criminal conduct.