The Supreme Leader of the Iranian regime, Ali Khamenei, announced on January 9 that American and British-made vaccines for Covid-19 would be banned. His directive caused the planned delivery of at least 100,000 dosages, which were to be donated by philanthropists in the United States, to be cancelled immediately.

While this amount is insignificant in comparison to what the country’s 83 million people require, it would have gotten Iran’s vaccination programme off the ground long before locally produced alternatives became available.

To this day, those alternatives are less effective than the vaccines Khamenei rejected, and there has been far less research into their safety and long-term impacts. The same may be said for the Chinese and Russian dosages that Iran has begun to import, none of which has arrived in the numbers that were promised. To make matters worse, the acts of private corporations charged with vaccine distribution limit the availability of all vaccinations, including those that have been illegally imported.

It’s simple to assume that Iran’s “sixth wave” of coronavirus infections isn’t going away anytime soon based on recent events. When it does terminate, the conditions that follow are unlikely to preclude the emergence of a seventh. Iraj Harirchi, the Iranian regime’s Deputy Health Minister, projected on Tuesday that the “infection and death toll will continue to rise exponentially” for the foreseeable future, citing a lack of vaccination access as a major factor.

Since Khamenei proclaimed his determination to promote domestic drug manufacture, the regime’s immunisation campaign has reached fewer than 3% of the Iranian population. For weeks, the rate of immunizations has remained unchanged, and as a result, the number of new diseases and fatalities has spiralled out of control.

Iran set a new daily record for Covid-19 deaths at the start of this week, with 588 registered in a 24-hour period. During the same time span, 40,808 new infections were reported, albeit this number only includes people who have been officially tested and is unlikely to include everyone.

The People’s Mujahedin of Iran (PMOI / MEK Iran) has an extensive intelligence network within Iran that has been gathering medical records, leaked government documents, and eyewitness testimony to create its own periodical assessments on Covid-19’s impact on Iranians. The newest statements cite a death toll of 366,400, which is more than three and a half times the government’s overall mortality figures. 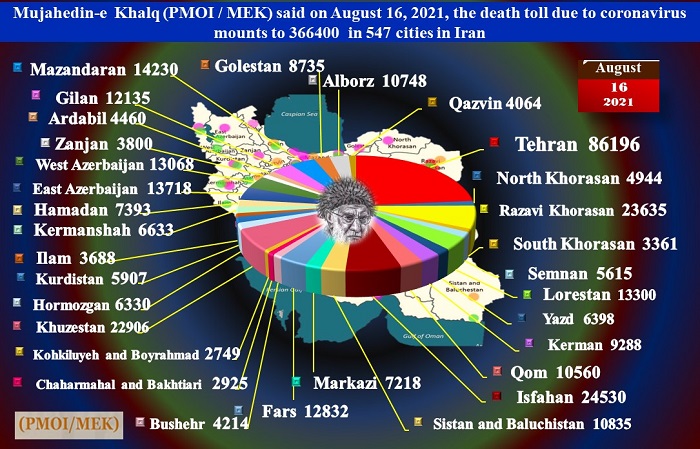 Khamenei’s mishandling of the situation

In past remarks, it has been suggested that Khamenei’s mishandling of the situation is at least partly deliberate and that the refusal of Western vaccines is part of a plan to prolong the local health crisis in order to reduce popular unrest. There are some signs that it worked, as simultaneous protests were taking place in more than a dozen provinces at the same time as of January 2020, but they were significantly less regular and smaller in magnitude for the rest of the year.

Despite escalating breakouts, social agitation has resurfaced in recent months and has remained more or less constant since Raisi was confirmed as president in a closely controlled election process on June 18. Members of the Iranian opposition have pointed this as indicators of a potential nationwide uprising similar to those that occurred in January 2018 and November 2019.

(NCRI) and (PMOI / MEK Iran): Why was Khamenei suddenly afraid of the Covid-19 spread in Iran.

Mrs. Maryam Rajavi, the President-elect of the National Council of Resistance of Iran (NCRI): The multitudes of people killed by the coronavirus in Iran, leaving thousands of our compatriots grieving every day, hurt the heart of every freedom-loving and conscientious human being.