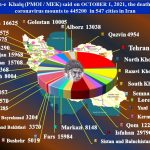 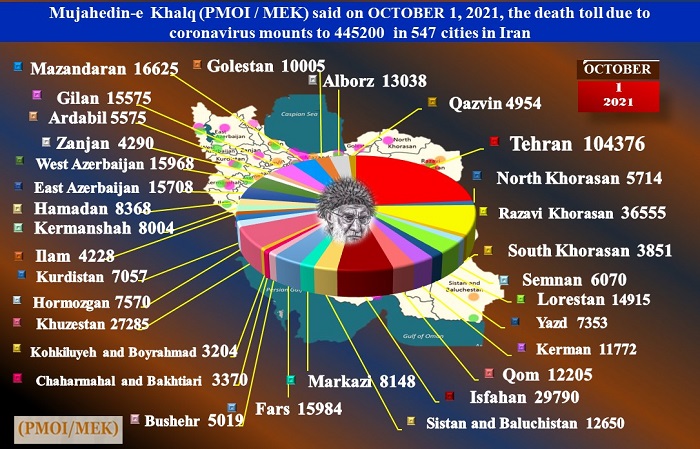 According to the Iranian opposition group The National Council of Resistance of Iran (NCRI), and the People’s Mujahedin of Iran (PMOI / MEK Iran), 445,200 people had died in Iran as a result of the Covid-19 outbreak as of October 1.

The sixth coronavirus wave is on its way

Recently, Iran’s state-run media acknowledge that the sixth coronavirus wave is on its way, along with more deadly strains:

“While worries about the fifth wave’s continuation have yet to be answered, some are predicting a sixth coronavirus wave in Iran and contemplating the start of the next pandemic wave,” according to a piece in the state-run Hamdeli newspaper quoting Iranian health specialists.

“Since general vaccination has not yet reached 70 percent of the population, we will face a new outbreak of the disease in case of any negligence,” the state-run piece says on September 25, citing the deputy dean of Gilan Medical Sciences University.

On Saturday, Iran’s new school year began, and regime President Ebrahim Raisi paid a visit to a school in Shahr-e-Rey, south of Tehran.

The regime’s Health Ministry plans to immunized students with vaccines that have not yet been approved by the World Health Organization (WHO). One of these vaccines is Sinopharm from China, which has not been licensed by the WHO for use in children.

Using Sinopharm vaccine which is not approved by (WHO)

“Iran recently announced that it has begun administering Sinopharm vaccinations to students. International bodies have not yet recommended vaccination for this age group with this vaccine. This demonstrates the importance of importing Pfizer vaccinations, which are internationally licensed. Iran has inexplicably insisted on reopening schools and has begun immunizing children. Vaccination for children aged 12 and up is underway, despite the fact that the Pfizer vaccine is regarded suitable for young people in other areas of the world, and Sinopharm has yet to receive such approval,” wrote the state-run Arman daily, on September 25.

“The Health Ministry, and specifically the Food and Drug Administration, is responsible for deciding which vaccine is to be used for 12 to 18-year-olds or under 18 years old in general. These issues have nothing to do with the WHO, and if the Food and Drug Administration and the Health Ministry determine whether a vaccine is appropriate or safe, that is the end of all discussions,” said Abbas Ali Shahriari, chair of the regime’s Majlis (parliament) Health Commission, while disregarding WHO’s legislation for vaccinations, according to a September 25 report by the state-run Jomhouri Eslami newspaper.

“Among people who had received their second vaccine dose more than two weeks ago 2027 people have died of coronavirus complications, according to a report released by Iran’s Statistics and Information Technology Management Center. Furthermore, the death toll of vaccinated people in the country was ten times the global standard,” As per to a report published on the same day by the state-run Iran daily about the numerous side effects of these vaccines.

Adopting a policy that is harmful to the Iranian people occurs at a time when WHO-approved vaccinations from companies like Pfizer, Moderna, and AstraZeneca are freely available. Vaccine imports are immune from sanctions and are not subject to FATF approval, contradicting previous blatant lies by regime officials.

During the coronavirus crisis, the dictatorship has tried to control the existing situation in order to prevent further social unrest.  The regime allows Khamenei-affiliated entities, such as the Revolutionary Guards (IRGC), to profit off poor Iranians by making unapproved vaccinations domestically or importing unregulated vaccines.

As a result, widespread demonstrations by teachers who, rather than attending classrooms, have flocked to the streets to protest the regime’s harmful and destructive policies.