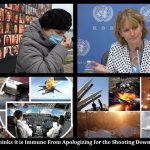 MEK Iran: Mullahs Regime is not Immune From the Shooting Down of Ukrainian Airplane

Written by Esmail Mohades on March 1, 2021. Posted in NEWS 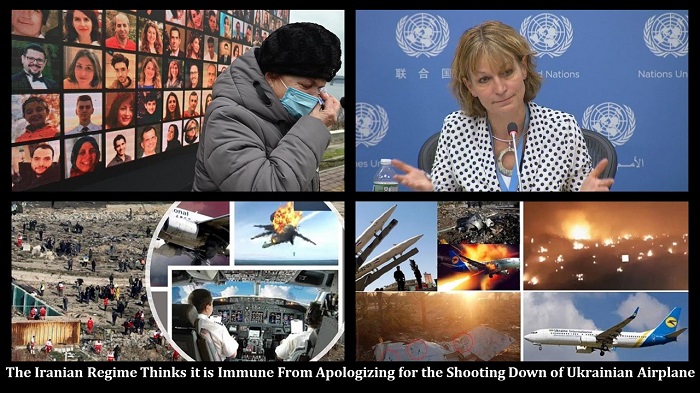 (NCRI) and (PMOI / MEK Iran): The Iranian Regime Thinks it is Immune From Apologizing for the Shooting Down of Ukrainian Airplane.

The National Council of Resistance of Iran (NCRI), and the People’s Mujahedin of Iran (PMOI / MEK Iran), reported that the family members of the downed Ukrainian plane that was shot down by the IRGC in January 2020 are still grieving but it appears the regime in Iran is too arrogant to even apologize.

The regime even had the audacity to question Ms. Agnes Callamard, the United Nations Special Rapporteur on Extra-Judicial Executions, over her questioning of the incident.

Ms. Callamard commented n Twitter:  “The Iranian government had 2 months to engage with my report. They failed to do so and are now attacking NOT the substance of my work but my Mandate, proving that they know nothing of its history, which includes the state responsibility to protect against unlawful deaths.”

The regime has no intention, it seems, of replying to legitimate questions about its role in shooting down the airliner in January 2020 in the aftermath of the assassination of Iranian terrorist in chief, Qassem Soleimani.

(NCRI) and (PMOI / MEK Iran): Iranian regime foreign minister Javad Zarif (Right), meeting with the commander of the Qods Force Qassem Soleimani. Based on the Treasury department’s announcement, Zarif will also be included in the list of Iranian regime-sanctioned persons.

176 innocent lives were lost when the IRGC fired not one but two missiles at the plane. It took three days of obfuscation and denial before the regime even admitted that the IRGC was to blame for the disaster. Many Iranians took to the streets after the plane crash, protesting against the regime. The only response was more repression, not remorse.

The regime has also failed to answer the letter penned by seven prominent UN human rights experts questioning what happened back in 1988 when 30,000 political prisoners were slaughtered by the regime. It’s as if the current leaders of the Iranian dictatorship think that they are immune from any sort of criticism.

(NCRI) and (PMOI / MEK Iran): A Ukrainian airliner was shut down by the Iranian regime on Jan, 8, killing 176 people on board.

The UN experts after consideration of the evidence available to them said that “the 1988 massacre may amount to crimes against humanity.”

The Iranian opposition has attempted to alert the international community to the abuses carried out by the Iranian regime any time before, but in most cases, their statements have fallen on deaf ears.

As the UN expert’s letter said: “the international community’s failure to act had a devastating impact on the survivors and families as well as on the general situation of human rights in Iran and has emboldened Iran to continue to conceal the fate of the victims and to maintain a strategy of deflection and denial that continue to date.”

The mullahs’ regime has continued its path of bloodshed

The regime has continued its path of bloodshed without regard to what people think about it beyond its borders. Arrests, torture, and executions are part of the daily nightmare in Iran.

The country is experiencing enough pain as a result of the botched response to the pandemic without having to cope with a government stuck in a medieval mindset.

If EU leaders really think that they have “human rights in their DNA” as Josep Borell has stated, then they should take far firmer action against the medieval mullahs before another bomb attack actually succeeds in their midst.

(NCRI) and (PMOI / MEK Iran): Iran’s decades of terrorist activity across the world.

The significance was of the sentencing of an Iranian diplomat

It appears that most EU leaders have failed to take into account exactly what the significance was of the sentencing of an Iranian diplomat, Assadollah Assadi, in Belgium earlier this year on terrorism charges.

Assadi acted with full support from the regime in June 2018. The attempt to blow up the Free Iran Rally took place for the same reasons as the regime no fails to respond to questions about the downing of the Ukrainian airliner: it thinks it is above any criticism.