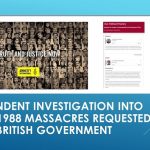 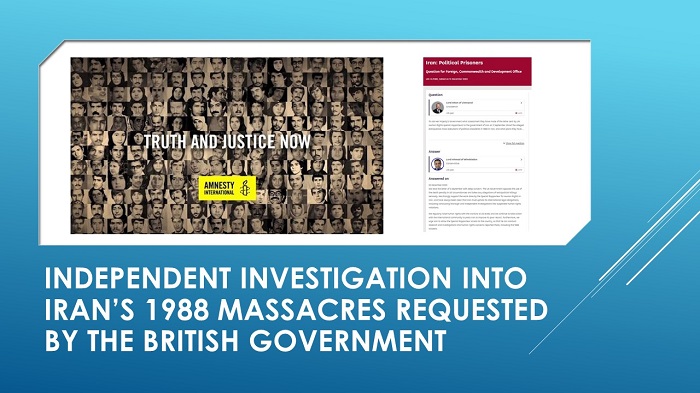 The British government has raised the matter of the 1988 massacre of political prisoners in Iran with the Iranian regime as a result of a letter released by seven United Nations human rights experts in September this year.

the National Council of Resistance of Iran (NCRI) and the  People’s Mojahedin Organization of Iran (PMOI / MEK Iran) reported that the request by the UK government is for the regime in Iran to allow an investigation into the 1988 massacre by the United Nations Special Rapporteur on the situation of human rights in Iran.

By AFP: Amnesty hails ‘breakthrough’ as UN presses Iran on 1988 massacres of dissidents: Rights groups have long campaigned for justice over what they describe as the extrajudicial executions of thousands of mainly young people across #Iran just as the Iraq war ended.#MEK pic.twitter.com/bIQtZELq13

The matter was brought up by Lord Alton of Liverpool who asked the British government what they had one about the letter since its release. The UK Human Rights Minister, Lord Ahmad of Wimbledon, said in reply that “we read the letter of 3 September with deep concern. We regularly raise human rights with the Iranians at all levels, and we continue to take action with the international community to press Iran to improve its poor record. Furthermore, we urge Iran to allow the Special Rapporteur access to the country, so that he can conduct research and investigations into human rights concerns reported there, including the 1988 incident.”

The 1988 massacre as a crime against humanity

The September letter had referred to the massacre as a crime against humanity. More than 30,000 political prisoners, mostly members or supporters of the People’s Mojahedin Organization of Iran (PMOI / MEK Iran) were executed in 1988 and then buried in secret, mass graves. The international community, including the U.N. never appropriately responded to the massacre, even though the fact that it had occurred was widely reported at the time.

The UK Human Rights minister reiterated that Britain has “always been clear that Iran must uphold its international legal obligations, including conducting thorough and independent investigations into suspected human rights violations.”

It appears that the Iranian regime has no desire to change its ways and continues to torture and execute political prisoners, often on absurd charges, at will.

(#NCRI) and (#PMOI /#MEK #Iran) condemns this brutal execution because a person who had already been sentenced to prison has been hanged. #WeStand4FreeIranhttps://t.co/y69ORhjLEF pic.twitter.com/IEBUH4jOP1

The most recent execution

Before this execution, there was that of French Iranian, Ruhollah Zam, a resident of the E.U. Even though this time E.U. leaders expressed their outrage at the execution of a dual national and resident of France, The Iranian regime responded by calling in the ambassadors of a number of European nations to admonish them for “supporting terrorism.”

The E.U. has already scheduled a business meeting with Iranian counterparts when the execution took place. This was canceled after the execution, but the real lesson was who they were going to do business with. One of the main people in the regime the meeting was scheduled to convene with was Mohammad Javad Zarif, who is one of the main apologists for the regime and has even referred to Iran as the “greatest regional democracy.”

Ebrahim Raisi, a member of the 1988 Massacre’s “Death Commission” assigned as the highest judicial position within the regime.

The EU must take decisive action against the regime in Iran

Some of those who were directly involved in the 1988 massacre are representing Iran’s interests and in positions in the regime. This includes, for example, Ebrahim Raisi, who is the head of Iran’s Judiciary.

The fact that the international community never brought the theocratic regime to account for the massacre that occurred has allowed the regime to act with impunity whenever and wherever it feels fit, knowing that it will not be sanctioned for it.

The EU should now take decisive action against the regime in Iran, starting with a blacklist of any of its leaders who had a role in the 1988 massacre and any others who continue to violate human rights in Iran. Any economic relationship with Iran should be dependent on Iran fulfilling its international rights commitments.

#NCRI and #MEK said: “The EU should break its silence and end its appeasement policy. The EU should put more pressure on the #Iran regime, hold it accountable for its terrorism and human rights.#WeStand4FreeIran pic.twitter.com/58EnbSHleG