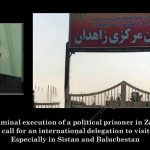 Written by Amineh Qaraee on December 27, 2020. Posted in NEWS 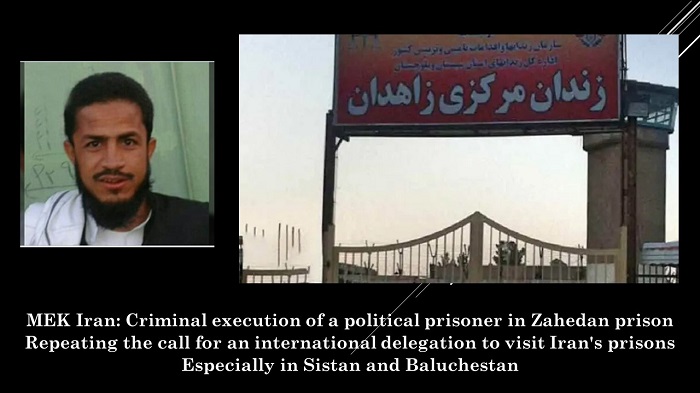 (NCRI) and (PMOI / MEK Iran) condemns this brutal execution because a person who had already been sentenced to prison has been hanged.

The National Council of Resistance of Iran (NCRI), and the People’s Mojahedin Organization of Iran (PMOI / MEK Iran) reported that the criminal execution of a political prisoner has taken place in Zahedan prison.

(NCRI) and (PMOI / MEK Iran) repeating the call for an international delegation to visit Iran’s prisons, especially in Sistan and Baluchestan province.

On Saturday, December 26, 2020, the religious fascism ruling Iran executed political prisoner Abdol-Hamid Mir-Baluch Zehi in Zahedan prison. He had been in prison for the past five years and was initially sentenced to 15 years in prison. He was, however, executed by the regime’s judiciary after the Revolutionary Guards’ intervened. This hanging took place on the anniversary of the December 27, 2009 uprising, which shook the clerical regime to its core.

Three other imprisoned Baloch compatriots are also in danger of execution on charges of “moharebeh” (waging war against God). One of the three detainee’s cases is related to Mir-Baluch Zehi.

(NCRI) and (PMOI / MEK Iran), strongly condemns this brutal murder as an extra-judicial execution because a person who had already been sentenced to prison has been hanged.

(NCRI) and (PMOI / MEK Iran) urges the United Nations Secretary-General, the UN High Commissioner for Human Rights, and the Human Rights Council, as well as other human rights organizations to condemn this barbaric execution and to take urgent action to rescue the death row prisoners in Iran.

(NCRI) and (PMOI / MEK Iran) also reiterates the need to establish an international commission of inquiry to visit Iran’s prisons and meet with prisoners, especially those in Sistan and Baluchestan prisons.

Another Iranian Baluchi man, Abdolbaset Khesht was executed today in the Central Prison of Zahedan, SE #Iran. He was sentenced to death on the charge of killing a security agent, which he denied. He was denied a last family visit prior to execution. #StopExecutionsInIran pic.twitter.com/ejxHozXQ8h

The clerical regime’s human rights dossier must be referred to the UN Security Council, and its leaders must be brought to justice for four decades of crimes against humanity.

Mrs. Maryam Rajavi the President-elect of the National Council of Resistance of Iran’s (NCRI): “The mullahs’ regime has achieved nothing but suppression and executions. To terrorize the public and keep their grab on power, the mullahs are executing prisoners rather than releasing them“