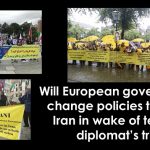 MEK Iran: Calls for EU to End Policies of Appeasement Towards Mullahs regime

(PMOI / MEK Iran): Global security and human rights issues in Iran are not something that the international community should be ignoring. The EU should already have assertive policies in place so that the regime’s terrorist diplomats do not have the opportunity to plot major terrorist attacks on European soil.

Ruhollah Zam, an Iranian journalist who lived in France as a refugee for several years has been executed. He was lured to Iraq where he was subsequently kidnapped and taken back to Iran by the notorious Islamic Revolutionary Guard Corps (IRGC).

When back in Iran, Mr. Zam was violently interrogated, a confession was forced from him and he was then charged with “spreading corruption on Earth”. In the months leading up to his execution, numerous human rights activists, organizations, and Western lawmakers condemned the Iranian regime for the death sentence. However, it had very little effect.

We are horrified at Iran's execution of journalist Rouhollah Zam. The use of the death penalty against him over his media work was absolutely prohibited under international law. His execution shows the extent of Iran's brutal tactics to repress dissent. https://t.co/S6EQazCoAz

Dr. Alejo Vidal-Quadras, professor of atomic and nuclear physics, former vice-president of the European Parliament from 1999 to 2014, and President of the International Committee In Search of Justice (ISJ), has called on the European government to end its policies of appeasement towards Iran.

After the news of Zam’s arrest, the Europe-Iran Business Forum was canceled by foreign ministries across Europe. The entire EU condemned the execution of Mr. Zam, noting a lack of due process and the “denial of human dignity and integrity”. However, Mr. Vidal-Quadras points out that many do not believe the EU will be able to maintain this posture for anything more than the short-term.

At the beginning of the month, the foreign policy chief of the EU Josep Borrell spoke publicly about his discussion with the Foreign Ministry of Iran. He failed to comment on anything other than the enforcement of the shambolic nuclear agreement. He even failed to mention the trial of the Iranian regime’s terrorist diplomat that had just started in Belgium, reinforcing the idea that the Iranian regime’s impunity is going to continue.

Last November, the Iranian regime responded to the nationwide uprising with such violence that more than 1,500 protesters died, more than 4,000 were seriously injured, and many more thousands were arrested. Since then, the Iranian regime has continued to target dissidents – harassing or re-arresting former political prisoners, threatening and intimidating opponents, and so on. Reuters confirmed in a special report on December 23, 2019, about the deadly crackdown on November nationwide protests in Iran the death toll of 1500 that was announced by the People’s Mojahedin Organization of Iran (PMOI / MEK Iran) on December 15, 2019.

And just like with Mr. Zam’s execution, the regime reacted to the uprising from a place of fear. Cracking down on protesters and executing individuals like Mr. Zam is the regime’s way of trying to create an atmosphere of fear to stop the possibility of another uprising that would push the regime even closer to collapse.

The (PMOI / MEK Iran) and the National Council of Resistance of Iran (NCRI) have taken great efforts to help the people of Iran that have been left extremely vulnerable by the government.

The international community’s silence with regards to the brutal suppression of protesters last November just gives the regime the confidence to continue with its malign acts.

Global security and human rights issues in Iran are not something that the international community should be ignoring. The EU should already have assertive policies in place so that the regime’s terrorist diplomats do not have the opportunity to plot major terrorist attacks on European soil. This is not the case right now, but after the trial in Belgium, it would appear that this is the perfect opportunity to make the necessary changes and to show the regime that Europe is not a doormat.