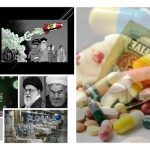 Written by Jennifer Jones-Kelley on November 7, 2020. Posted in NEWS

(PMOI / MEK Iran): The regime and its lobbies have extensively argued that the sanctions have caused the pharmaceutical crisis in Iran.

The Iranian regime’s Islamic Revolutionary Guards Corps (IRGC) announced on Wednesday a new ballistic missile system, was unveiled according to a report from the state-run Mashreq news.

The report stated: “At the presence of Brigadier General Hossein Salami, the IRGC’s Commander in Chief, today, the IRGC Aerospace automatic and intelligent system of long-range ballistic missile launches was unveiled.”

A Costly Undertaking During a Pandemic

The announcement comes as the coronavirus death toll in Iran is reaching record numbers and hospitalizations are overwhelming exhausted healthcare workers with insufficient facilities and equipment to manage the crisis.

More than 145,400 people in Iran have died from COVID-19, according to a statement released Friday by the National Council of Resistance of Iran’s (NCRI) and the People’s Mojahedin Organization of Iran (PMOI / MEK Iran).

While over 60 million of #Iran's 84 million population is living poverty, the regime is focused on advancing its ballistic missile program.#Priorities https://t.co/mzWwRneRvR

Regime officials have repeatedly blamed international sanctions for the severity of the coronavirus crisis in Iran, but the regime has done little to assuage fears that Iran is a threat to global security. The regime’s decision to openly produce new ballistic weapons is an act of aggression that counters any claims of diplomacy.

In addition, the new ballistic missile program is a costly undertaking that is being implemented in the midst of a deadly pandemic. The regime claims that sanctions are preventing the country from financially addressing the coronavirus, yet it is spending an obscene amount of taxpayer money on weapons that will ensure a continuance of sanctions. Meanwhile, the funds the regime has allocated for coronavirus response have not been dispersed to health authorities and frontline workers.

More than 145,400 people have died of the novel #coronavirus in 462 cities checkered across all of #Iran's 31 provinces, according to the Iranian opposition PMOI/MEK. pic.twitter.com/ZNJMV3AjsD

Regime Health Minister Saeed Namaki has repeatedly urged top government officials to release the promised $1 billion in coronavirus funding to the Health Ministry. To date, he says his ministry has only received 27 percent of these funds, which he says have been largely offset by cuts to the ministry’s budget.

A large number of Iranian nurses have not been paid in months, and many of them have been deprived of healthcare and other benefits after being forced to sign 180-day contracts. Healthcare workers face exhaustion and dangerous conditions as they treat coronavirus patients. Masks and other personal protective equipment is in short supply.

The True Reason for a New Ballistic Missile Program

The regime’s announcement of a new ballistic missile program makes little sense until one considers the timing, which coincides with the impending anniversary of the November 2019 Uprisings.

Supreme Leader Ali Khamenei revealed his fear of a new popular uprising in comments on Tuesday. “To ensure external security and not to covet the enemies, defense tools such as missiles, drones, and aircraft must be strengthened. To ensure internal security, the relevant organizations [such as the IRGC] must be vigilant about infiltration,” he said. It is noteworthy that while Khamenei discussed weapons, he neglected to address the COVID-19 pandemic that is currently ravaging the country.

Khamenei’s preoccupation with “infiltration” is due to the growing influence of the (PMOI / MEK Iran) and Iranian Resistance in Iran and his deep fear that he will be overthrown in a popular uprising. Khamenei later referred to the (PMOI / MEK Iran) and their role in ongoing anti-regime protests in his speech. The regime has also criticized France for harboring (PMOI / MEK Iran) members, describing them as “terrorists.” The Iranian regime is known as the leading state sponsor of terrorism in the world.

The November 2019 Uprisings brought Iranians into the streets to protest the regime’s sudden fuel price hike. Within hours, long-standing social unrest boiled over and the protesters called for regime change. Millions of Iranians demanded a new government in a massive popular uprising that went on for five days and was only suppressed after 1,500 protesters were shot dead in the streets and another 12,000 were arrested.

Regime authorities have done everything in their power to prevent another uprising since then. Participants in the November 2019 Uprisings have been executed or been given harsh prison sentences, the government has imposed massive crackdowns on political dissent, and now it has produced more ballistic missiles to potentially use against its own people or anyone who dares to support those who desire freedom.

It is imperative that the international community adopt a firm policy on Iran and recognition of the threat it poses to global security. It is also crucial that Western countries recognize the right of the Iranian people to rise up and demand a free and democratic Iran.

Mrs. Maryam Rajavi the President-elect of the National Council of Resistance of Iran’s (NCRI): The volcanic uprising in November washed away all unfounded claims. It was proven that it is possible to inspire and organize protests. It was proven that despite all the repression and crimes, our people have a spectacular desire and readiness to continue their uprising.

The right policy can be summed up in a single word: firmness. That means firmly dispensing with everything that enables the Iranian regime's terrorist activity, and firmly responding to every single criminal act. #NoImpunity4Mullahs #Iran pic.twitter.com/p73PwTj7fE