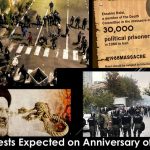 Written by Amineh Qaraee on November 6, 2020. Posted in NEWS

The Iranian people and their Resistance led by NCRI and (PMOI / MEK Iran) really are the biggest threat to the mullahs regime’s existence and the mullahs know it. That is why it is focusing so much on the opposition.

The Iranian people have made it clear that they will not be forced into silence. The people want the mullahs’ regime to collapse so that they can move forward with a democratic leadership that respects their rights. The (PMOI / MEK Iran) has played a major role in amplifying their voice and drawing attention to the international community of their struggle.

The Iranian people and their Resistance led by NCRI and (PMOI / MEK Iran) really are the biggest threat to the mullahs regime’s existence and the mullahs know it. That is why it is focusing so much on the opposition.

Ebrahim Raisi, Iran’s head of the judiciary, who is also known for being one of the perpetrators responsible for the massacre of political prisoners in the summer of 1988, recently told prosecutors in the country to suppress the masses and in particular the youth. Raisi directed this at the Supreme Council of the Judiciary on November 2nd because he is trying to stop any further security breaches being taken by the people.

Ebrahim Raisi said: “Security is a fundamental issue. We will not allow the country’s security to be compromised at any cost. Some want to compromise the people’s security through corruption and evil acts… #MEK #Iran pic.twitter.com/TzSeNytGIU

This month is the anniversary of the November 2019 uprising when the protest was quelled and many protesters were shot by security forces.  Raisi is afraid that this act may be repeated. (PMOI / MEK Iran) revealed there have been 400 killed in Tehran Province, another 320 in Kermanshah, 270 in Fars, 240 in Khuzestan, 120 in Isfahan, and 100 in Alborz (Karaj). MEK Iran also released the names of nearly 1000 slain protesters.

Raisi mentioned November 4 (13 Aban), which is a day that Iran’s government has designated as “Student Day” and “Fight against global arrogance.”  He said this date should be used to highlight global arrogance and the need to teach it to the next generation.

Ebrahim Raisi, Khamenei's judiciary chief has called for decisive dealing with miscreants and anyone harming the security, society or neighborhoods in Tehran… but killing those who protest for freedom is free#WeStand4FreeIran pic.twitter.com/m5gQlzQAPO

Raisi said the country’s security was vital and shouldn’t be compromised. He said that there are some people around who are just so evil that they want to threaten the country’s security by creating evil and making people feel insecure and even using corrupt means to do so. He said it was not acceptable to promote insecurity throughout the nation. He said the regime and security forces must put security first in front of everything else.  He said that other areas of importance such as economic, social, and cultural were now to be secondary and that all officials should be paying their utmost attention to keeping the country secure.

Because the regime is so afraid of a repeat of the protest in 2019, it summoned the families of those who were killed last November and warned them not to organize an anniversary event. These families have been threatened by officials from the Ministry of Intelligence (MOIS) that family members will be arrested if they show any videos and photos of the ceremony and post them on social media.

A 2nd report released on Monday confirmed that the regime was afraid of what was going to happen on the evening of the anniversary of the November 2019 uprising,  so they have put their security forces on standby to quell any protests as the anniversary gets closer.

Despite this emphasis on security, some of the regime’s suppressive centers were attacked and burnt down recently.  The rebellious and defiant youth of several cities, including Tehran, Isfahan, Homayounfar (Isfahan), Kish (Hormozgan), and Gonabad set their sights on five Revolutionary Guard (IRGC) Basij bases. The Basij is the most hated suppressive paramilitary force that exists in Iran. Its key role is to use repressive measures against the people to keep the mullahs in government. The Basij played a key role in subduing the November 2019 protests.

Earlier this week, Supreme Leader Ali Khamenei spoke about the “security” issues that the regime faces, saying that it is of utmost importance to protect it against protests. He also spoke about the People’s Mojahedin Organization of Iran (PMOI / MEK Iran). – the regime’s main opposition – showing just how much of a threat it poses to the regime’s existence.

On the eve of the anniversary of the November 2019 uprising, we commemorate the martyrs whose sacrifice have inspired and reinvigorated the Iranian nation. #IranProtests pic.twitter.com/s4C1c0pNhV

Mrs. Maryam Rajavi the President-elect of the National Council of Resistance of Iran’s (NCRI): On the eve of the anniversary of the November 2019 uprising, we commemorate the martyrs whose sacrifice has inspired and reinvigorated the Iranian nation.