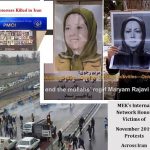 Written by Esmail Mohades on October 31, 2020. Posted in NEWS 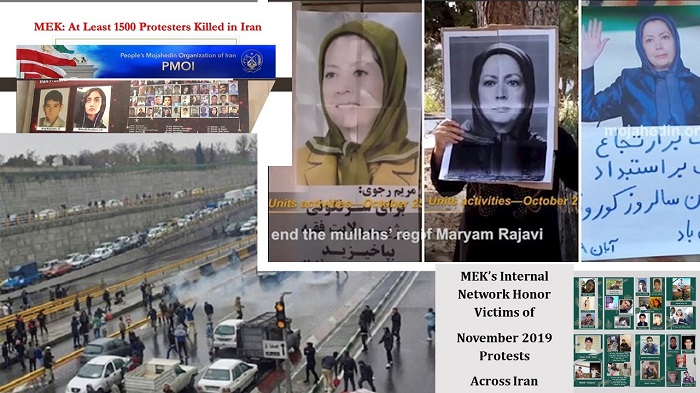 (PMOI / MEK Iran), It is clear from these slogans that the Iranian people are pursuing freedom and democracy after more than four decades of brutal repression, torture, and execution.

In November there will be the anniversary of the nationwide uprising organized by the Iranian Resistance Units, which is the internal network of the Iranian opposition movement, the People’s Mojahedin Organization of Iran (PMOI / MEK Iran). It will be throughout the country commemorating the loss of its members in the protest by fixing and holding up their pictures spreading slogans and messages from the Iranian Resistance leader, Massoud Rajavi, and the President-elect of the National Council of Resistance of Iran’s (NCRI), Maryam Rajavi.

In Tehran, Isfahan, Shiraz, and Mashhad, three of the nation’s major cities, banners and posters were displayed reading in part, “Honor the memory of martyrs of the November 2019 uprising,” “Khamenei is a murderer, and his rule is illegitimate,” and “Rise to end the mullahs’ regime.”

The protests came about when the regime suddenly increased fuel prices and anger spreads quickly throughout the country. The regime did not want to listen to the people but instead, it retaliated, gunning down 1,500 young, unarmed protesters who were peacefully demonstrating.

Who are the MEK Resistance Units?

They are Iranian activists who no longer support the present regime. They have been playing key roles in the Iranian opposition movement, (PMOI / MEK Iran), working together to play a leading role in Iran’s protests. The Iranian Resistance, (PMOI / MEK Iran), believes that any change in Iran must come from the Iranian people and their desire to want change.

The MEK resistance units don’t just concentrate their activities in Iran’s biggest cities but they have influence in cities like Karaj, Rasht, Homayunshahr (Isfahan province), Urmia, Kermanshah, Qaemshahr, Babol, Lahijan, Kish, Dorud, Bandar Abbas, Fardis, and Lorestan where they have inspired millions of Iranians to believe there is something better than the mullahs’ repressive rule.

The MEK Resistance Units on October 28th celebrate Cyrus the Great Day, which in Iran is an unofficial holiday, celebrating the life of Cyrus the Great, who when he ruled ancient Persia wrote the “oldest known declaration of human rights.”

Many of the slogans chanted by the Iranian people when taking part in the nationwide protests include:

It is clear from these slogans that the Iranian people are pursuing freedom and democracy after more than 4 decades of brutal repression, torture, and execution.

These protests show how brave the protester’s areas the security forces have been told to torture and kill young people who turn out in various cities to protest.

Recently the youth of Iran have focused on the regime’s suppressive centers which include 5 Basij bases in Tehran, Karaj, Kazeroun, Afus, and Mobarakeh (Isfahan). The Basij are hated as they are known for being a suppressive paramilitary force within Iran and have strong links with the terrorist Revolutionary Guards (IRGC). The Basij are there to keep the mullahs in power.

These brave and rebellious young people also set alight images, banners, and posters of regime officials in Vardanjan and Borujen (Chaharmahal and Bakhtiari Province), and Kerman. This included destroying banners of the regime’s Supreme Leader Ali Khamenei and Qassem Soleimani. In Kerman, a banner of the ministry of intelligence was burned down.

These actions just show how much the Iranian people hate the regime and all they want is to get rid of for good the mullahs.