Written by Esmail Mohades on October 25, 2020. Posted in NEWS

The youth that supports the resistance units, affiliated to the opposition, (PMOI / MEK Iran), have set fire to repression centers and have written slogans on city walls throughout the country saying death to the dictator.

A few days ago, the East Azerbaijan police commander revealed that 176 young men had been arrested because they were “thugs.” He also said the arrests took place to honor Iran’s State Police or Niruy-e Entezami-e Jomhuri Eslami (NAJA) Week. This isn’t the reason at all as in reality these arrests took place because the regime is afraid of the youth who were some of the key supporters of the National Council of Resistance of Iran’s (NCRI), and the People’s Mojahedin Organization of Iran (PMOI / MEK Iran), who took part in last November’s uprising.

#NCRI and #MEK #Iran reported that Mohammad Reza Yazdi, commander of the criminal “Mohammad Corps” in #Tehran, said: “The Razavioun patrols, which were created to provide security, started preparations since two years ago. https://t.co/R5DWDC5xzQ

Increase in arrests in Tehran

A few days earlier, Hossein Rahimi, Greater Tehran’s police chief, ordered the arrest of 389 people, who he also called “thugs”. Three weeks ago, there was no occasion called NAJA week!

On October 1st, the police commander of Gilan, Azizallah Maleki, said that 26 people were arrested for disrupting order and security in the cities of Rasht, Langrud, Anzali, and Siahkal. These people were also called thugs.

It has become a trend recently to call young people thugs, arrest them, and then lock them up in prisons.

#EbrahimGanji, the editor-in-chief of the #Yaghish magazine at the University of #Gilan, was arrested by security forces. pic.twitter.com/xeyQCCkpN1

On October 12th, several young people were thrown into a car, driven around the city, and were beaten and insulted for the public to see. The response from the public was to oppose this action as they saw it as inhumane. These are despicable acts carried out by the regime’s forces. They also extend to the amputation of fingers and the destruction of the homes of the poorest.

The regime allegedly says that the arrests are taking place in the name of security. What is more, to the point is that they feel that their survival is threatened. This has been going on since November 2019 when 12,000 young people were arrested at the protest with many of them being identified through photos and videos that were taken at the protestor caught by CCTV cameras. They were also seen as a threat to security.

From the beginning of the November uprising that started last year, the People’s Mojahedin Organization of Iran (PMOI / MEK Iran), the main opposition to the Iranian regime, tracked the deaths – compiling names of those that died. In December, the (PMOI / MEK Iran) reported that more than 1,500 protesters had been killed by the repressive security forces. This number will surely be even higher now considering the number of people that were left with extensive injuries.

The last few months have shown that there is discontent amongst the people as they suffer through the pandemic with increased unemployment and poverty. The people show that they are tired of this government and just want to overthrow it.

The youth that supports the resistance units, affiliated to the opposition, Mojahedin-e Khalq (PMOI / MEK Iran), have set fire to repression centers and have written slogans on city walls throughout the country saying death to the dictator. 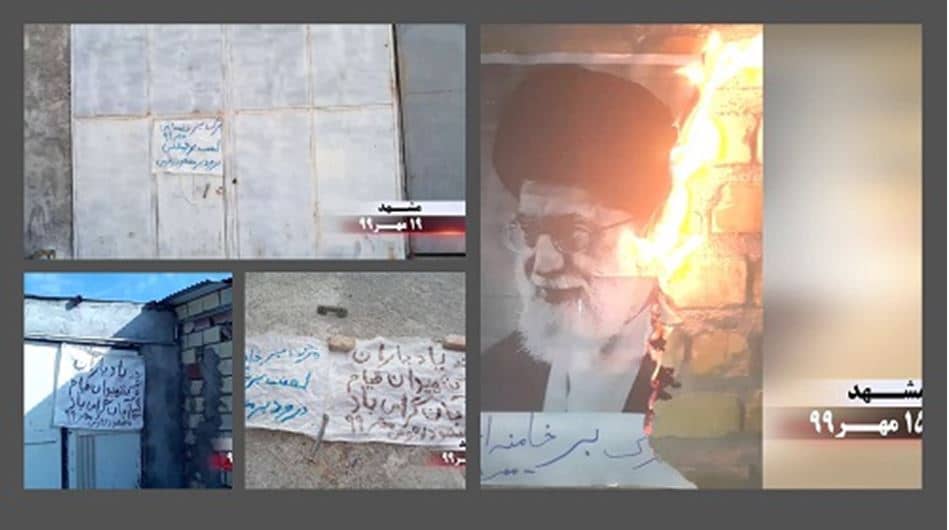 The photos and banners of ex Revolutionary Guards (IRGC) commander, Qassem Soleimani, and the Supreme Leader, Ali Khamenei, has been torn down or burnt throughout the country by MEK resistance units. This sort of action is what the regime fears the most. 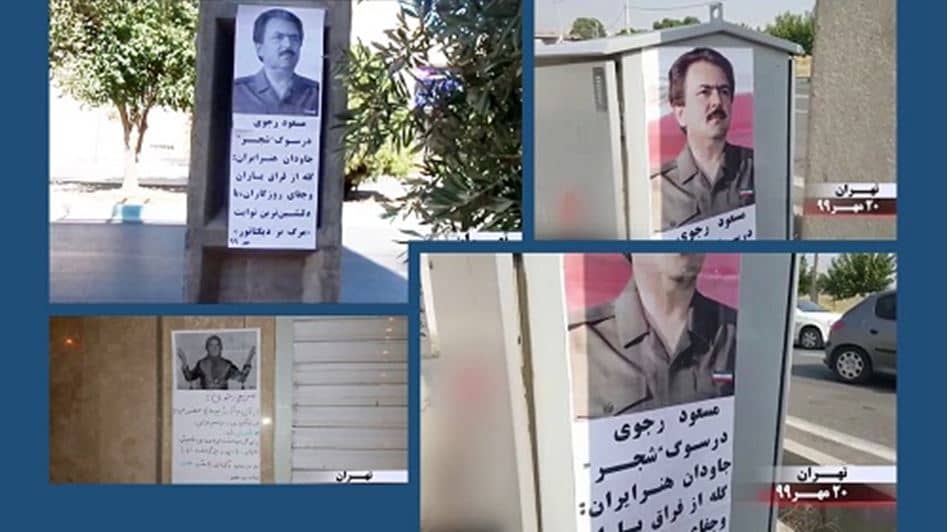 Tehran – Activities of the Resistance Units and supporters of the MEK following the passing of Iran’s national artist – “Massoud Rajavi: In memory of Shajarian, who will always remain in our memories… We will always remember his most moving message, ‘death to the dictator’” – October 12, 2020

When the popular Iranian singer, Mohammad-Reza Shajarian died, any gathering supporting his life would undoubtedly turn into a protest. When celebrating his life the people in their groups used the opportunity to raise their voices against the dictatorship of the mullahs. The common slogan used was ‘death to the dictator’. 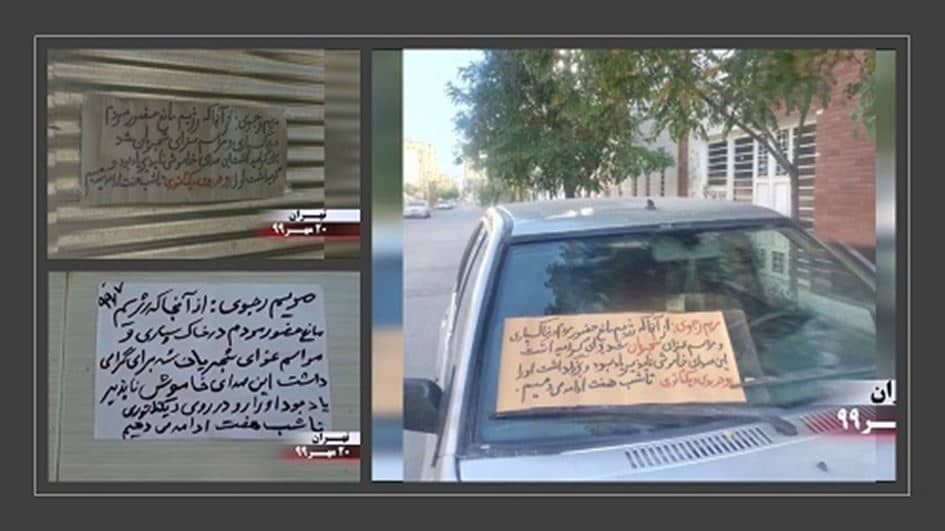 Tehran – – Activities of the supporters of MEK in responding to Mrs. Rajvai’s call to commemorate Shajarian the enduring voice – October 12, 2020