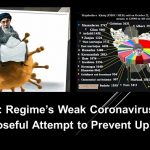 Written by Jennifer Jones-Kelley on October 23, 2020. Posted in NEWS 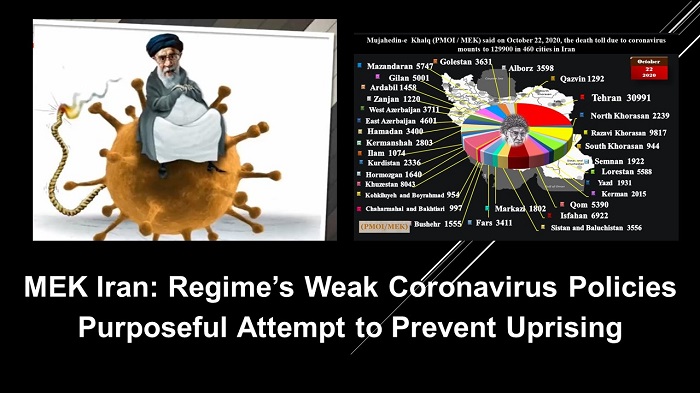 (PMOI / MEK Iran): Khamenei Compares COVID-19 Crisis To Iran-Iraq War Calling It a Blessing, which Khomeini prolonged for eight years, resulted in the death of one million Iranians, injuries to two million, and the displacement of two million other people

The Iranian resistance, the National Council of Resistance of Iran’s (NCRI), and the People’s Mojahedin Organization of Iran (PMOI / MEK Iran) reported on Wednesday that more than 129,900 people in Iran have died from Covid-19 since the beginning of the pandemic. Iran’s staggering mortality rate places it among the hardest-hit countries in the world, and conditions are worsening on a daily basis. By every measure, the coronavirus has devastated the country. So why does the regime treat the deadly pandemic as a welcome guest?

Why Welcome a Plague?

The answer to this question may be found in November 2019, when millions of Iranians took to the streets to protest the corrupt dictatorship after the government announced a sudden gas price hike. Regime security forces killed 1,500 protesters and arrested 12,000 more, according to MEK sources, but the people rose up again in January 2020 in protest of the government’s coverup of its role in the downing of a Ukrainian airliner.

Khamenei Compares COVID-19 Crisis To Iran-Iraq War Calling It a Blessing#Iran–#Iraq war, which Khomeini prolonged for eight years, resulted in the death of one million #Iranians, injuries to two million and the displacement of two million other peoplehttps://t.co/xmqEgu20ur

Both of these uprisings were covered extensively by Western media, and in both cases, the regime’s actions were met with international outrage and condemnation. Support for the MEK and the Iranian Resistance grew as the regime’s hold on power weakened.

Regime officials knew in January that Covid-19 had reached Iran, but they concealed this information from the public. The regime planned to hold its annual festivities in honor of the Islamic Revolution to maintain the facade of support for the mullahs in February. The Majlis (Parliamentary) elections were also set to take place later that month, and the MEK planned a nationwide boycott of the election.

Mrs. MaryamRajavi, the President-elect of NCRI, congratulated the Iranian people for the nationwide boycott of the sham election by the ruling religious fascism.

The regime faced a choice: it could either inform the people of the deadly disease in their midst and save hundreds of thousands of lives, or it could say nothing and save face politically. It chose the latter.

Mrs. #MaryamRajavi, the President-elect of #NCRI, congratulated the Iranian people for the nationwide boycott of the sham election by the ruling religious fascism.#BoycottIranShamElections #MyVoteRegimeChange https://t.co/hProYVrkbW

Regime officials were forced to acknowledge the presence of the coronavirus in Iran two days before the Majlis election after more than 50 bodies piled up in the city of Qom made it impossible to deny the outbreak. The Health Ministry confirmed two coronavirus deaths in Iran and zero active cases on the first day it reported data to the World Health Organization. Meanwhile, morgues in Qom overflowed with the dead. Two days later, Iranians went to the polls to vote without coronavirus precautions in place. It is a small blessing that the (PMOI / MEK Iran) boycott was a success, and many voters stayed home. The virus had already spread unchecked for a month, though, and the regime’s policies would ensure that it would continue to lay waste to anyone not wealthy enough to avoid it.

Feb 19 Qom Qaleh, Mahabad, NW #Iran
Locals protest and throw out the former Mahabad MP who came to them for votes. Angry locals say he did not keep any of his election promises. #Iranians have called for a nationwide boycott of the Feb 21 Majlis elections. #IranShamElections pic.twitter.com/KX7Pelt7bm

To those who are unfamiliar with the Iranian regime, it might sound hyperbolic to accuse a government of allowing a virus to spread unchecked among its people for political gain. If only that were true. State-run media have published numerous stories about the regime’s strategic use of the coronavirus pandemic to prevent future uprisings. On July 13, the state-run Mostaghel daily wrote: “A savior was needed to divert people’s attention from the November and January [uprising] incidents. So, came the novel coronavirus. The government used people’s fear of this invisible enemy to unleash the dragon among them.”

Even after acknowledging the presence of the coronavirus in Iran, regime officials covered up the extent of the outbreak. To date, the official death toll is approximately one-fourth of the actual number of deaths due to Covid-19. Regime authorities refused to close shrines even as the holy city of Qom surged with infections and deaths. The nationwide lockdown was lifted while infections still soared, causing a predictable second wave weeks later. Students were forced to take university exams in-person without social distancing, leading to another surge in infections. Mourning ceremonies were held on Muharram, despite the cancellation of the yearly pilgrimage to Mecca. At every possible turn, the regime has chosen the path most likely to cause death.

While other nations have spent vast sums of money on coronavirus response, the Iranian regime has devoted very little of its available budget. Iran’s Health Minister recently complained that he has yet to receive more than 70% of the funds allocated for fighting the coronavirus. And while the regime complains that U.S. sanctions prevent it from providing adequate treatment to its people, it turned down U.S. medical aid in March and sent Doctors Without Borders home when they offered assistance. The regime has turned down any assistance that does not come in the form of cash.

The one exception is Tehran’s request to use its nuclear centrifuges to “disinfect masks and equipment.” That one has to be on the level.