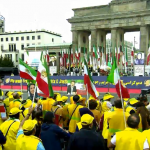 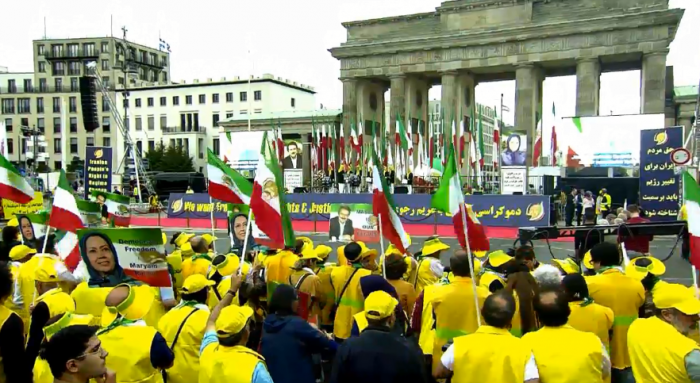 Over 15,000 supporters of MEK, take it to the streets of Berlin, voicing the Iranian people’s quest for freedom and democracy for Iran.-July 6, 2019

On Saturday, July 6, 2019, in continuation of “Free Iran rallies”, more than 15000 thousands supporters of the Peoples Mojahedin Organization of Iran (MEK / PMOI) held a massive and impressive demonstration in Berlin.

Berlin-Free Iran rally supported the uprising of the Iranian people and the struggle of MEK resistance units “to overthrow the clerical religious dictatorship and the establishment of democracy and people’s sovereignty, and expressed their support for the PMOI/MEK, the National Council of Resistance of Iran (NCRI) and its President-elect, Mrs. Maryam Rajavi, and her 10 point plan for future Iran.” reported the NCR-iran.org

“No shower will deter us from saying what we came here to say, which is to Khamenei: “We want to tell Khamenei, we’re coming for you. We want to hold you accountable for all the people you murdered because they were longing for freedom, justice, and democracy.”

Ms. Betancourt spoke against the policy of appeasement, saying, “We are here to say to our governments in Europe that we don’t want any more agreements and concessions with the corrupt and criminal government of the mullahs.”

The mullahs kill physically,but they also kill morally through defamation.We know the people we stand with.These are the people who R fighting with the criminals.Don’t get it wrong
You can’t change the truth by writing articles#IstandWithMaryamRajavi #FreeIran #BlackListRouhani pic.twitter.com/dm0LW6SioO

Betancourt discussed the regime’s demonization campaign against the MEK and encouraged Western media not to play into the mullahs’ hands by falling for their propaganda. She specifically condemned a recent attack on the MEK by Der Spiegel that a German tribunal found to be libelous.

“The mullahs kill physically, but they also kill morally through defamation,” she stressed. “We know the people we stand with. These are the people who are fighting with criminals. Don’t get it wrong. You can’t change the truth by writing articles.”

Betancourt concluded her speech with scathing criticism of the New York Times for its false portrayal of the Islamic Revolutionary Guards Corps (IRGC) as having support from the Iranian people. The article also claimed the IRGC had renounced its hardline religious beliefs and had not suffered a loss of power due to U.S. sanctions.

That is a lie! Not only is [the #IRGC] criticized by the people, but they are also facing division in their ranks because they don’t have money to pay their ranks and to finance their war in the middle east.This is the beginning of the end of the mullahs’ regime#BlackListRouhani pic.twitter.com/8VgrLCWfvp

“This is a lie! Not only is [the IRGC] criticized by the people, but they are also facing division in their ranks because they don’t have money to pay their ranks and to finance their war in the Middle East. This is the beginning of the end of the mullahs’ regime,” Ms. Betancourt said.

“The Iranian regime is a religious dictatorship. It is a threat to the world and is trying to acquire a nuclear weapon. We must do whatever we can to prevent the regime from acquiring a nuclear bomb to endanger world peace.”

Mr. Norde said that he shared the concerns that have been voiced by others about war in Iran. He said that war is not the answer for Iran. He pointed to the solution provided by Mrs. Rajavi. Norde agreed with her that “the solution is in the hands of the Iranian people and the Resistance who are standing up and fighting against this regime. Democracy and freedom cannot be exported to Iran. The people have risen for freedom and democracy.”

“There are many politicians and journalists who go to Iran and spread lies. We must stand up against these. We must support the will of the Iranian people and their struggle for freedom,” Mr.@NordMdb concluded.#IstandWithMaryamRajavi #FreeIran #BlackListRouhani pic.twitter.com/usSMXE4UH9

Norde spoke of the anti-regime uprisings that took place last year. “Last year thousands of men and women took to the streets of Iran, demonstrating for the rights of women and for the freedom of thousands of political prisoners.”

“They take great risks to stand up against the regime. They risk their lives for the freedom of their country. We support them and we condemn the acts of the regime,” the German Bundestag Member continued.#IstandWithMaryamRajavi #FreeIran #BlackListRouhani pic.twitter.com/M5AQTGmeKu

“They take great risks to stand up against the regime. They risk their lives for the freedom of their country, and that is why they are worthy of attaining freedom. We support those who have been tortured in the regime’s prisons and we condemn the acts of the regime,” he added.

“We must support the will of the Iranian people and their struggle for freedom. We express our solidarity with the Iranian Resistance,” he concluded.