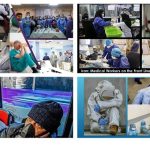 Written by Amineh Qaraee on October 14, 2020. Posted in NEWS

(PMOI / MEK Iran) – UNDER EQUIPPED HEALTH WORKERS IN IRAN PASSING AWAY: Nurses and Doctors in hospitals are under tremendous pressure due to hard-working in the coronavirus crisis in Iran.

Iran now has not only one of the highest Covid-19 infection rates in the world, but also one of the highest fatality rates too. Over 122,300 people have died of the coronavirus in Iran’s 31 provinces, according to reports by the Iranian opposition People’s Mojahedin Organization of Iran (PMOI / MEK Iran). The battle against the virus requires the best medical equipment as well as good salaries for staff who are at high risk of getting the virus, but the regime hasn’t provided any of these. It hasn’t even told workers and other citizens to stay at home, which is the safest thing to do given the present pandemic situation.

More than 122,300 people have died of the novel #coronavirus in 458 cities checkered across all of Iran's 31 provinces, according to the Iranian opposition PMOI/MEK.

Minoo Mohraz, a member of the National Coronavirus Combat Task Force, believes that the government and the Education Ministry have actually encouraged people to move around in such an unsafe environment.

No end in sight for the pandemic

The (PMOI / MEK Iran), the main opposition to the mullahs’ regime, has been monitoring the situation very closely since the beginning of the outbreak because the corrupt mullahs’ regime cannot be trusted to be honest in such situations. The regime claims that the numbers of people have died, stands at 29,070, a fifth of the actual figure declared by the (PMOI / MEK Iran).

Because of the regime’s handling of the pandemic in Iran, it has shown it is using it to take control of its citizens particularly after the anti-regime protests that have been taking place in recent times which showed how shaky its grip is on Iran. There are clear indications that it is the most important officials in the regime who are responsible for the high increase in infections and fatalities over the last two months.

Over 122,300 people have died of the novel #coronavirus in 458 cities checkered across all of #Iran’s 31 provinces, according to reports tallied by the Iranian opposition PMOI/MEK as of Tuesday afternoon local time, October 13.https://t.co/AHY6OMUTsC

Mohraz believes it is now impossible to count how many waves of infections are or could affect Iran as COVID-19 is virtually out of control in the country and no one is doing anything to stop it.

There is a lack of statistics indicating the number of deaths so far from the virus, but medical facilities treating the victims have counted over 120,000 deaths and that has sadly included numerous medical staff. The regime knows the toll that the virus has had on the medical community but has done nothing about salaries or the deplorable living conditions the workers have to live under in order to deliver key services.

Supreme Leader, Ali Khamenei, allegedly controls around $1 trillion that is in the hands of charitable institutions to aid the poor. There has been no serious investment in the health and well-being of the people.

The Ministry of Health was promised a billion dollars but barely a third has been allocated so far so there is no cash available to pay for medicine, equipment, facilities, and salaries.

There is certainly a crisis in the healthcare system and Alborz’s governor is saying that it is eroding rapidly. Mohraz states that all beds are filled, and patients are being administered treatment wherever there is space which is often outside in the open air.

Deputy Health Minister, Iraj Haririchi, is ashamed that the health workers have not received their salaries or overtime pay for up to four months. When they do it is less than Iran’s minimum wage set by the Department of Labor.

Wrecking the lives of Iranian medical workers #IransAngels
This gathering took place in Babol, North of Iran as frontline #COVID19 fighters took on the risk to do extra time but got nothing back from the government @WHO
▶️https://t.co/uINNq7zwiG pic.twitter.com/x4JIuifUMh

Mrs. Maryam Rajavi the President-elect of the National Council of Resistance of Iran’s (NCRI): Hail to the doctors and nurses who are saving lives by taking the highest risks. As the number of casualties is approaching 120,000, the IRGC must be disbanded, and its budget and facilities allocated to the healthcare system to help combat Coronavirus.

We commemorate the physicians and nurses who lost their lives to provide care to the #Coronavirus patients.They risk their own lives while their basic rights have been trampled for years under the mullahs’ rule.All of us feel indebted to these selfless women & men #IND2020 #Iran pic.twitter.com/OvNDhY9fDM

MEK Iran: UNDER EQUIPPED HEALTH WORKERS IN IRAN PASSING AWAY