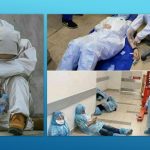 MEK Iran: Under Equipped Health Workers in Iran Passing Away

Written by Mohsen Aboutalebi on March 28, 2020. Posted in NEWS

Nurses and Doctors in hospitals are under tremendous pressure due to hard-working in coronavirus crisis in Iran.

Reports from Iran indicate that dozens of health workers have contracted Coronavirus and died as a result of being severely underequipped. Since the beginning of the outbreak, the notorious Islamic Revolutionary Guard Corps (IRGC) has been hoarding necessary medical supplies, leaving health workers including doctors and nurses on the frontline to fend for themselves.

It is horrific that the very people who are saving the lives of others are now losing their own lives because they have not been provided with the most basic of protective equipment.

Several of the health workers have been named. They include 60-year-old Dr. Abbas Tusan from Babol in the northern part of the country. He was an ear, nose and throat specialist and plastic surgeon. Dr. Mehdi Variji in Tehran, nurse Tahmineh Adibi in Anzali and nurse Hanieh Edalati were also named as victims.

The #Iranian regime does not tell the truth on #victims of #coronavirushttps://t.co/ZShLba4910#MEK #Iran @USAdarFarsi pic.twitter.com/Aye3QoaZpb

In Gilan in northern Iran, health service workers are battling against the spread of the virus in the most appalling conditions. They are in one of the areas with some of the highest fatality rates.

The Iranian regime has refused to publish accurate statistics regarding the numbers of people that have contracted the virus and the mortality rate across the country. Instead, the main opposition to the Iranian regime has been monitoring the situation and reporting on the reality of the crisis. The People’s Mojahedin Organization of Iran (PMOI / MEK Iran) has once again stepped up to compensate for the regime’s inadequacies.

The organization has reported that more than 10,900 people in the country have died after contracting the virus.

The country’s Ministry of Health, however, has said that the number of fatalities has reached almost 2,000, however, this is grossly underestimated. This is a complete fabrication as several areas in the country have to see more than one thousand deaths each.

Not only is the Iranian regime endangering the lives of its people, but it is also risking the lives of its neighbors. There have been several offers of aid from other countries across the world including from the United States. The Médecins Sans Frontières organization (MSF), Doctors Without Borders, has offered to provide Iran with a team of volunteer doctors, but Iran has refused.

More than 12,400 people in 228 cities across Iran have died of coronavirus, according to reports obtained by the Iranian opposition PMOI/MEK.#Iran#COVID19https://t.co/924q5FlQbx

The MSF team was keen to establish a pop-up hospital in the city of Isfahan in central Iran – one of the worst-hit areas. Instead of gratefully accepting the offer that would make such a difference, the Iranian Health Minister refused. Alireza Vahhabzadeh said on social media that Iran does not need “hospitals established by foreigners”. The Iranian regime does need help from outside Iran because it is entirely incapable and unwilling, to take any actions or measures to curb the outbreak.

Since the first cases were noted in Iran, the regime has denied and downplayed the effects. It has refused to take any actions that may have a potentially harmful effect on the economy and it is concentrating all its efforts on containing public dissent.