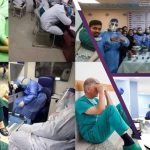 The situation for nurses in Iran is worrying, with many living with constant job insecurity and poor working conditions.

The economic situation in Iran has been terrible for years because of the regime’s mismanagement and corruption. Many services across the country have suffered, in particular the health system.

There has been a widespread shortage of nurses that has severely compromised the level of care that is available in the country and there have been promises of a massive recruitment drive. However, these promises have never materialized and the inadequacies in the health system have continued for years.

But now, the situation has taken a huge turn for the worse because of the Coronavirus outbreak that is pushing many health services across the world to their limits. In a shocking turn of events, reports from Iran are saying that the regime is firing medical staff and leaving those that remain underequipped.

COVID-19 kills 29000 in #Iran.
While PMOI/MEK Iran reports that more than 29,000 #people have died after contracting #COVID19, the Iranian regime is reporting that only 4,777 people have died. https://t.co/EOPTMn8PkF#MEK @USAdarFarsi pic.twitter.com/d7a8ksqILr

In a letter to the Iranian health minister, the Director-General of the Nursing System Organization Mohammad Mirza Beigi highlighted the critical nature of the situation. He said that the firing of nurses must be urgently reviewed, describing their dismissal as “odd and unexpectable”.

Speaking about the huge sacrifices made by nurses across the country during the Coronavirus outbreak, Mr. Mirza Beigi said that their skills are invaluable and their dedication to their work is astounding. He said that the nurses in the country have a high level of both technical and scientific skills.

Referring to promises made by Iranian President Hassan Rouhani, the Director-General of the nursing organization said that at least 20,000 nurses should have been hired by now and that only a fraction of this recruitment has happened. He warned:

“Our dear nurses are exhausted. Our situation was chronic before the Coronavirus outbreak, and now it is worse. … Their wages and overtime are usually delayed by an average of 12 months.”

The situation for nurses in Iran is worrying, with many living with constant job insecurity and poor working conditions. Because of the lack of nurses, their workloads are much higher than they should be and they are now, during the Coronavirus crisis, working without the protective equipment that they should be.

More than 29,000 people have died of the novel coronavirus in 278 cities checkered across all of Iran's 31 provinces, according to the Iranian opposition PMOI/MEK.#Iran#COVID19 pic.twitter.com/1yISnkcecj

The Iranian regime has been trying to cover up the extent of the current health crisis and it has been threatening medical staff that speaks out about reality. There have been several medical workers that have been arrested or threatened after speaking about the Coronavirus outbreak.

An investigation into the regime’s criminal coverup must be carried out and the brave and hard-working medical workers that are putting their lives on the line to save others must be supported.