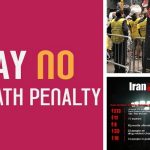 MEK: Iran Bucks the World Trend With Rise in Executions 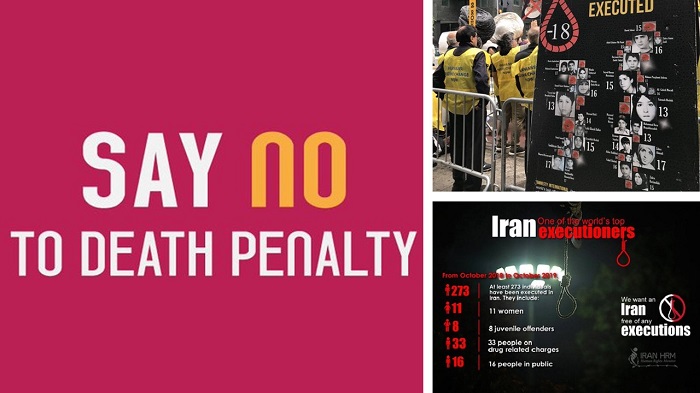 The criminal act of executing Navid Afkari has outraged both Iranians and the international community. Slogans have been written and banners and placards have been placed strategically by the Resistance Units and supporters of The (MEK / PMOI Iran).

Iran isn’t the only country that still uses the death penalty, but the number of prisoners sentenced to death and executed in the first half of this year has smashed a dubious world record.

On May 14th, 2018, MEK’s website reported on Iran’s record of executions. The article referenced a report by Amnesty International, that said that Iran is responsible for 51% of executions worldwide.

The death penalty in #Iran is something that #HumanRights activists and organizations have been drawing attention to for years. Executions continue to take place regularly in Iran– the culmination of often unjust trials and unfair arrestshttps://t.co/52rhU5h7H0#MEK @USAdarFarsi pic.twitter.com/O0nFVhdtDE

Most countries that aspire to be ‘civilized’ have either abolished the death penalty already or are expected to do so soon. The death penalty results in some of the most barbaric executions possible. They include hanging, firing squad, electric shock, beheading, and stoning.

Iran meanwhile, and that means the Iranian regime with Supreme Leader, Ali Khamenei at the helm, is going in the opposite direction to the rest of the world. 136 prisoners were executed in the first half of this year. This number included 2 women and several children, although most were adult males. One prisoner was executed in public. 8 prisoners executed were political prisoners.

On October 10, 2019, which was the World Day against the Death Penalty, Maryam Rajavi, the leader of the Iranian opposition, president-elect of the National Council of Resistance of Iran (NCRI), gave a speech about execution in Iran, which has stolen the lives of 120,000, Mujahedin-e Khalq (PMOI/MEK) members and supporters.

The roll call of political prisoners executed includes the following all sentenced to death for the so-called crime of “Moharabeh” which translated from the Persian means “waging war on God.” In Iran, someone who protests against the regime can be accused of “waging war against God.”

So long as the clerical regime has not been overthrown, it will not let up on executions and torture. Nor will it let up on misogyny, religious discrimination, terrorism and warmongering #Iran #NoDeathPenalty #NoImpunity4Mullahs https://t.co/vqx2pLytiC

This certainly isn’t the end of the list. The Iranian regime is paranoid about any kind of criticism or protest of its rule. 8 more political prisoners now await execution after receiving the death penalty. As with those listed above, the trumped-up charge is one of “Moharabeh.” In reality, it is simply because they were caught protesting against the regime.

The Iranian Resistance #NCRI declared years ago that it calls for abolition of death penalty and an end to torture and all forms of rights abuses in Iran. #NoDeathPenalty #NoImpunity4Mullahs @eu_eeas @francediplo_EN https://t.co/4mcHXAIhet pic.twitter.com/beHTIS49gu

In addition to these young people whose sentences have been issued and finalized, a number of other detainees, such as Ali Younesi and Amir Hossein Moradi, and some other detainees are also facing the threat of execution. We do not forget that 20 other political prisoners, most of whom are Sunni or Arab Iranians, have been sentenced to death in previous years and have been under execution for many years.

Children amongst those executed

Three children, all accused of murder, one at least having been tortured to get a confession, have been executed in the first half of the year. These were:

The executions of two political prisoners, in particular, this year, Mostafa Salehi and Navid Afkari got a lot of international attention. Campaigns were waged to try and persuade the regime to stop the executions.

#MEK #Iran, On the occasion of the International Day against the Death Penalty, the Iranian community in Germany organized a virtual conference titled, “Executions Means of Keeping Power” on Thursday, October 8. pic.twitter.com/IjzB0XTjZ6

The criminal act of executing Navid Afkari has outraged both Iranians and the international community. Slogans have been written and banners and placards have been placed strategically by the MEK Resistance Units and supporters of The People’s Mojahedin Organization of Iran (MEK / PMOI Iran).

Mrs. Maryam Rajavi, the President-elect of the National Council of Resistance of Iran (NCRI), said:

The people of Iran, especially the courageous youth, will not remain silent vis-à-vis the savage execution of this brave son of Shiraz and will rise up in solidarity with the heroic people of Fars Province over his unjust execution.

The religious fascism ruling #Iran will not survive a day without executions, torture and domestic suppression. By spilling the blood of young people like #NavidAfkari the mullahs seek to maintain their hold on power in the face of #IranProtests.

However, the death penalty is one of the few weapons the Iranian regime thinks it has left to try and suppress the growing impatience and anger of the Iranian people.

To give in to a campaign against these executions would have been unthinkable for Ali Khamenei. The executions have done the exact opposite, though, as they have simply increased the hatred for the regime felt by ordinary Iranians. The Iranian regime and the death penalty in Iran are living on borrowed time.