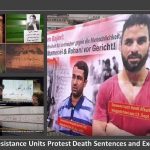 Written by Mohsen Aboutalebi on October 12, 2020. Posted in NEWS 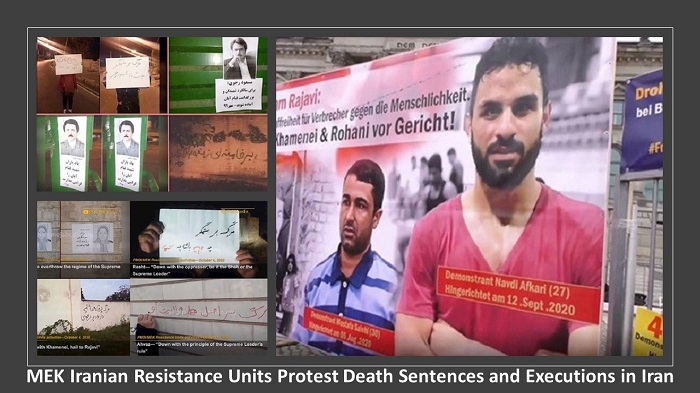 The activities of the Iranian Resistance Units, the internal network of the People’s Mojahedin Organization of Iran (PMOI / MEK Iran) – October 2020

Activists have marked the 2020 World Day Against the Death Penalty in Iran with activities designed to show the opposition to the death sentences and executions issued by the Iranian regime. The activists are members of the Iranian MEK Resistance Units, who represent the internal network of the People’s Mojahedin Organization of Iran (PMOI / MEK Iran).

The activists commemorated the 1,500 protesters who were killed by regime forces during the November 2019 uprising. They daubed graffiti on walls and held up images in cities across Iran.

The slogans the activists have been chanting are in direct response to the lies emanating from the Ministry of Intelligence and Security’s propaganda campaign aimed at discrediting the (PMOI / MEK Iran). Their slogans included:

“Down with dictators, be it the Shah or the Supreme Leader,” and

In recent days MEK Resistance Units have installed posters, banners, and images of Iranian Resistance leader Massoud Rajavi, and President-elect of the National Council of Resistance of Iran (NCRI) Mrs.Maryam Rajavi; and expand the call of anti-regime slogans for overthrowing the mullahs.

The youths of the MEK Resistance Units defiantly targeted four of the bases of the Basij units of the IRGC as well as an intelligence office in Isfahan and a judiciary building in Razavi Khorasan province.

This is not the first time the MEK Resistance Units have been actively protesting death sentences imposed by the regime’s courts. It is only recently that Mostafa Salehi and Navid Afkari, who were arrested during the 2018 protests, were executed. Soon after this happened, youths went out and targeted regional courts, Basij bases, and suppressive centers.

Banners of the regime’s leaders, including the Supreme Leader, Ali Khamenei, were torched by youth in Tehran, Eslamshahr, Mobarakeh, and Miandasht.

These youth are showing their contempt for the actions of the regime and their imposition of death sentences and executions. The Iranian MEK Resistance Units and their brave activists are determined that the regime should be overthrown and replaced with a democratic alternative.