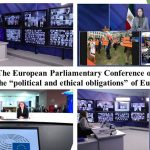 Written by Amineh Qaraee on October 7, 2020. Posted in NEWS 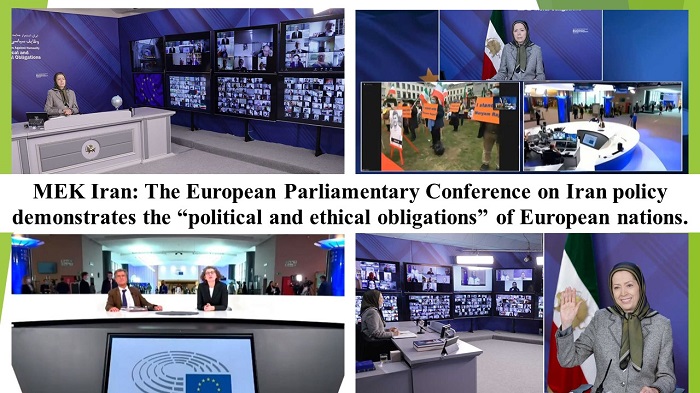 The gathering was organized by the NCRI and was an annual event, attended by supporters of the NCRI, MEK, and Iranian resistance movement.

On Wednesday 7 October 2020, the Friends of Free Iran (FOFI) organized a semi-online conference in the European Parliament, to draw attention to the “correct policy” and the “political and ethical obligations” for European nations in opposition to the regime’s “ongoing crimes against humanity.” Dozens of members of the European Parliament, spanning different political groups, critically analyzed the current EU policy on Iran.

There have been a number of online conferences hosted by the National Council of Resistance of Iran (NCRI), a coalition of Iranian pro-democracy groups, in recent months. These conferences have been held with the aim of opening up the international conversation and critique of Western policy in relation to the theocratic regime.

The People’s Mojahedin of Iran (PMOI / MEK Iran) is the NCRI’S group constituting the NCRI. They have been leading the struggle for democratic freedom in Iran for decades and have been the motivators behind nationwide uprisings in Iran over the past three years. The uprisings have been a key point of the conferences, as the NCRI and MEK call for the United States and European Union to take this opportunity to support the Iranian people make effective change in their homeland.

The regime’s human rights violations were a topic of focus in the latest conference in the European Parliament. In particular, the deeply disturbing new wave of executions that have been carried out against Iranian dissidents and protestors, such as the hanging of Navid Afkari, the Iranian pro-wrestler who was executed for participating in the recent anti-regime protests sweeping Iran. The MEP’s in attendance at the conference called for a stronger policy against Iran in regards to their violation of human rights.

Mrs. Maryam Rajavi, the President-elect of the National Council of Resistance of Iran (NCRI), addressed the online summit and put forward a three-pronged policy. One of the elements of this included: “Human rights for the people of Iran, the comprehensive embargo of the religious dictatorship, and recognition of the Iranian people’s Resistance for freedom and democracy.”

The foiled terrorist attack which planned to target the 2018 Free Iran gathering in Paris was also discussed by a number of participants during the conference. The gathering was organized by the NCRI and was an annual event, attended by supporters of the NCRI, MEK, and Iranian resistance movement.

The attack was thwarted with cooperation from multiple European authorities and the Iranian diplomat and third counselor at the Iranian embassy in Vienna, Assadollah Assadi, who was responsible for masterminding the attack is currently awaiting trial for his crimes on November 27. Assadi was responsible for delivering high-end explosives to agents of the regime who were intended to kill Maryam Rajavi and surrounding supporters. Several other high-profile European and US dignitaries were also in attendance at the event who could also have become causalities of the attack.

The regime’s terror plot demonstrated the lengths that the regime will go to in order to try and eliminate those that they deem to be a threat to their power, namely the Iranian resistance movement. It also exposes the close link between the official foreign policy activities of the regime and their terrorist financing. The MEPs at the conference emphasized the necessity of holding the regime accountable for their long history of terrorism, terrorist financing, and human rights violations, in Iran and internationally.

Mrs. Maryam Rajavi’s second point to her policy included the adoption of: “A binding legislation to expel the Iranian regime’s agents from European soil, shut down the regime embassies in all EU member states, and designate the IRGC and its proxies in Iraq, Syria, Lebanon, Yemen, and other countries as terrorist groups.”

Accountability and an end to the impunity that the mullahs of the regime have enjoyed was another issue to be raised during the conference. Assadi’s trial will be the first to sentence a professional Iranian diplomat on the charges of terrorist activity. The Iranian resistance and its supporters hope that this will be the beginning of a new era of legal and diplomatic pressure on the perpetrators of some of Tehran’s worst crimes. One particular instance of great importance for which justice is yet to be served is the regime’s massacre of 30,000 political prisoners in 1988.

The NCRI, MEK, and Western political groups have been taking action to pursue justice for the 1988 massacre as to this day no one has been held accountable for the killings. The scale of the massacre was enforced by “death commissions” which targeted political prisoners, most of whom were members of or affiliated with the MEK. The death commissions were formed in an attempt to eradicate the resistance to the regime and approximately 30,000 political prisoners were murdered in only a few months.

Not only has there been complete impunity for the worst perpetrators of the massacre, but they have been continuously rewarded and given positions of high-rank within the regime. This includes the head of the Iranian judiciary and Iran’s Justice Minister, amongst many other officials. Alarmingly, these individuals are now involved in forming the regime’s strategy for managing the growing resistance movement which was unable to destroy three decades ago.

The conference drew attention to the lack of accountability for the regime in order to demonstrate that it is also in the interest of Western nations to oppose the regime’s current and past crimes. The mullahs’ sense of impunity could lead to further attempts to assassinate leaders of the resistance movement, which in turn risks collateral damage among Western nationals. The conference participants also highlighted the importance of Western governments taking responsibility to sanction and diplomatically isolate the regime, even without a threat to their nation’s security, to stand up for freedom and democracy.

Thank you Mr. @paulocasaca1 for your strong remarks. You have always stood by the Iranian people and Resistance. We will never forget your support in hard times. And I'm sure that we will succeed. #FreeIran2020 pic.twitter.com/ZZXa5vvOjP

Further “correct policy” recommendations that emerged from Wednesday’s conference included the need to formally recognize the Resistance movement as the legitimate political alternative to the regime and affectively a ‘parliament in exile’. Several of the speakers brought attention to Mrs. Maryam Rajavi’s ten-point plan for the future of Iran.

This plan delineates a new system based upon free and fair elections, separation of religion from the state, and equal rights for women and minority groups. The potential of this system may have helped to motivate the nationwide uprisings that have been taking place in Iran since 2018. The brutal response of the regime and their attempt to orchestrate an international terrorist attack demonstrates that Tehran acknowledges the Iranian resistance as a threat to their oppressive theocratic rule.