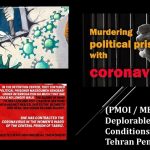 Written by Esmail Mohades on October 5, 2020. Posted in NEWS 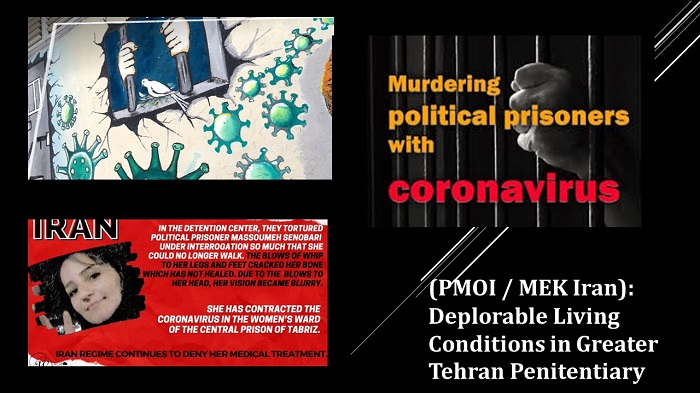 (PMOI / MEK Iran): The rapid rise in the number of coronavirus victims in Iran is part of the mullahs’ strategy of creating mass casualties to forestall the danger of an uprising and their overthrow.

Just a few days ago, prison guards working at the Greater Tehran Penitentiary used force to take political prisoners to Hall Two of the facility’s Unit Five section, reported by the People’s Mojahedin Organization of Iran (PMOI / MEK). Information released has suggested that the conditions, especially for political prisoners, are indescribable. What is likely to make matters worse is the prevalence of the deadly COVID-19 virus in the prison community. The coronavirus has taken the lives of more than 116,000 people throughout Iran, according to (PMOI / MEK Iran).

More than 116,000 people have died of the novel #coronavirus in 450 cities checkered across all of Iran's 31 provinces, according to the Iranian opposition PMOI/MEK.

Apparently, in Unit Two of the Greater Tehran Penitentiary, the 90 detainees are housed in just three rooms and only four toilets. COVID-19 may well be knocking on the door very soon and is likely to spread like a wild-fire given the crowded conditions.

The prisons were well settled in the old unit with additional comfort items like fridges and TVs, but they couldn’t relocate them.

Amnesty International has already said that Iran’s prisons are“catastrophically unequipped for outbreaks.” Tehran, it appears, completely ignored the appeals lodged by prison officials to provide suitable resources to help to stop the spread of the deadly virus and also suitable treatments for the prisoners. The sorts of items that have been requested include disinfectant, personal protective equipment, and useful medical devices.

Political prisoner Massoumeh Senobari has contracted the #COVID19 in the women’s ward of the Central Prison of Tabriz. #Iran's regime rejects her family's request to grant her leave for medical treatment for a second time https://t.co/M63MF3bofS

It isn’t a coincidence that this prisoner transferal has taken place since the execution of Navid Afkari, which brought about worldwide condemnation. The regime is trying to crack down on any further dissent. The regime has been hoping to scare the dissident and resistance movement including the MEK into giving up its protests by making examples through executions of anyone who rubs the regime up the wrong way. Afkari’s execution took place without providing any notice to his family or his lawyer and he was buried using the strictest security measures to prevent any protests.

Now it is possible that more executions of the November 2019 protestors could take place. The regime’s judiciary has already upheld its death penalty punishments and is using the possibility of executing these convicted prisoners as a way of getting the detainees to cooperate with the regime.  Naser Moradi, of one of the prisoner’s fathers, took his own life because of the pressure regime officials had been putting on him.

Recently some international human rights organizations and activists have warned Iran against putting undue pressure on prisoners and resistance movement members. They are trying to instill fear in ordinary Iranians by threatening and executing Iranians just for supporting their democratic right to protest and demand a free, secular, democratic society.

In another incident unfolding in Urmia Central Prison in northwest Iran, prison officials have reduced the prisoners’ food rations and bread so in the last two weeks they have been literally starving. The prison store is too expensive for prisoners to supplement prison food. It has got to the point that starving prisoners are trying to retrieve food from the garbage dump in the prison.

Mrs. Maryam Rajavi, the President-elect of the National Council of Resistance of Iran’s (NCRI) expressed alarm overspread coronavirus in Iran‘s prisons, calling on Antonio Guterres to take urgent action to save the lives of the prisoners to prevent a major humanitarian catastrophe!