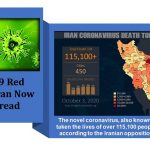 Written by Esmail Mohades on October 4, 2020. Posted in NEWS 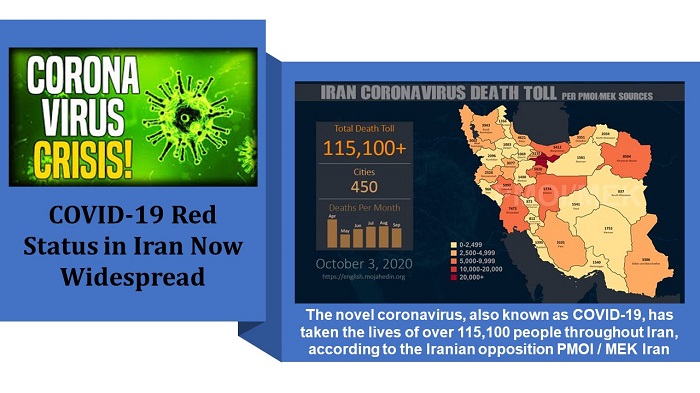 The People’s Mojahedin Organization of Iran (PMOI / MEK Iran) announced on, October 3, 2020, that the number of Coronavirus death tolls in 450 cities exceeded 115,100.

More than 115,100 people have died of the novel COVID-19 in  Iran, according to a report, by the Iranian opposition People’s Mojahedin Organization of Iran (PMOI/MEK), October 3. The official death count declared by the mullahs’ regime stands at 26,746, around a fifth of the actual figure.

In an interview with Shahrvand daily, one of Iran’s National COVID-19 task force members, Minoo Mohraz, explained that the terrible situation unfolding in Iran is due to politicians failing to heed the advice announced by scientific experts who are based at the Scientific Committee of the National Anti-Coronavirus Headquarters.

More than 114,300 people have died of the novel #coronavirus in 450 cities checkered across all of Iran's 31 provinces, according to the Iranian opposition PMOI/MEK.

She believes it has got to the point that people have to take the safety of their health into their own hands and look after themselves and not to rely upon the expensive hospitalization if the virus is too much to handle at home. Mohraz, in all her years working in the health sector, says she has never experienced so many deaths.

She was asked why so little had been done to offset the likelihood of a 3rd wave of the virus. Her response was that many people still did not see COVID-19 as a serious threat compared to the consequences such as unemployment, bouts of extreme anxiety, and poverty which have come to reveal themselves when strict lockdowns have been imposed around the world by governments. However, she does say that the Iranian regime made a big mistake reopening schools on September 5th.

The school children could just have continued to learn through television and radio as they did in the Iraq-Iran war. This action has caused more hospitalizations than the health system can cope with. Mohraz is telling people not to gather and to take their own actions to stop the spread.

She says the COVID-19 situation has got so dire that the hospitals designated the job of caring for victims of COVID-19 are overflowing and sick people requiring oxygen are being treated in hospital corridors. She said the health care workers are stretched to their limits and are totally exhausted. She stated that many of the code red areas had that status when the schoolkids returned to school, but their attendance has made the situation far worse.

She also said that as a scientific member of the National Anti-Coronavirus Headquarters she can offer her recommendations but she is not a decision-maker. She opposes any gathering in ‘’these super-red conditions ‘’ that Iran is currently experiencing. She is aware that the regime has a careless attitude towards the fate of the Iranian people in these pandemic times.

Mrs. Maryam Rajavi President-elect of three National Council of Resistance of Iran (NCRI): Khamenei and Rouhani do not pay the price to fight the coronavirus. They exact the price from the lives and pockets of the people. Khamenei has usurped a trillion dollars’ wealth of the people and has refused to spend it for the minimum needs of the people and sends them to work.

The rapid rise in the number of #Coronavirus victims in #Iran is the strategy of mass casualties to forestall the danger of an uprising and their overthrow. #COVID19 pic.twitter.com/QOXXnArDNu