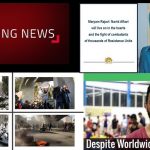 Written by Esmail Mohades on September 12, 2020. Posted in NEWS 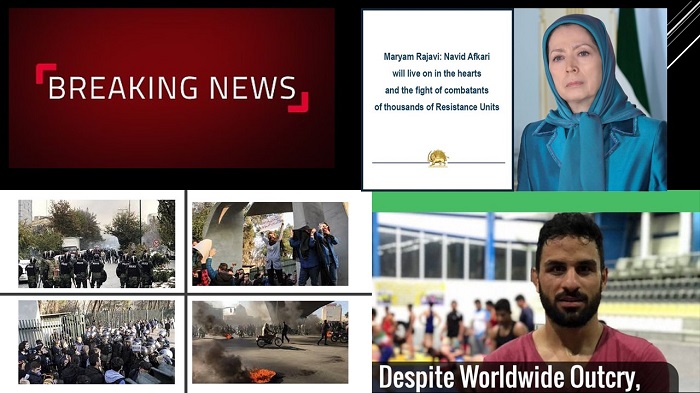 On the 12 September 2020, Navid Afkari, the Iranian wrestling champion, was executed for participating in the 2018 uprising, calling for regime-change. Afkari was brutally tortured while imprisoned to force him into making a confession. Despite global outcry, including from a union of 85,000 athletes and US President Donald Trump, the execution by hanging took place this morning in Shiraz.

#UPDATE Iran says it executed wrestler #NavidAfkari on Saturday for murdering a man during a wave of anti-government protests in 2018, drawing widespread condemnation and eliciting shock from the International Olympic Committee https://t.co/qKoFF7xAqb #MEK #Iran pic.twitter.com/Ac8q7EmJOB

The @UN's silence over crimes against humanity such as the #1988Massacre has allowed #Iran's authorities to act with impunity. Today they hanged wrestling champion #NavidAfkari for taking part in #IranProtests. #MEK pic.twitter.com/B4b06d5IwB

Mrs. Maryam Rajavi, the President-elect of the National Council of Resistance of Iran (NCRI), said: The people of Iran, especially the courageous youth, will not remain silent vis-à-vis the savage execution of this brave son of Shiraz and will rise up in solidarity with the heroic people of Fars Province over his unjust execution.

The religious dictatorship ruling Iran cannot survive for even one day without suppression, execution, and torture. By shedding the blood of the brave children of Iran, such as Navid, it seeks to preserve its rule in the face of the Iranian people’s uprising. But Navid’s martyrdom will only add fuel to the flames of the Iranian people’s uprising and will strengthen their determination to overthrow the clerical regime and to establish freedom and democracy.

#Iran Will Not Remain Silent in the Face of Navid's Hanging and Will Rise To Protest His Unjust Execution
The UN, the Security Council, the European Union, and all human rights defenders urged to take effective action#NoImpunity4Mullahs #NavidAfkari #UNSChttps://t.co/T5LB8YkvOG pic.twitter.com/Uy4IoOqhj2

Ms. Rajavi added: The United Nations Security Council, its member states, the UN Human Rights Council and High Commissioner for Human Rights, the EU, and all international human rights organizations must undertake effective and concrete measures against the Iranian regime for the execution of Navid Afkari and 120,000 political prisoners. Silence and inaction are tantamount to a green light to, and complicity with, the regime to continues its atrocities.

#Iranians, supporters of the People’s Mojahedin Organization of Iran (PMOI-#MEK) and the NCRI staged protests in many European countries to protest the execution of #NavidAfkari #NoImpunity4Mullahs pic.twitter.com/4w53NYAkrn

Reports indicate that the clerical regime is refusing Afkari’s family any rights to his body and are attempting to secretly bury him in order to prevent any gathering to honour him. They are fearful that this may fuel further protests and another potential uprising.

It is important that the international community continues to speak out as they did in attempts to halt the execution of Afkari. The UN, the Security Council, and the European Union should use their power to hold the regime accountable for their violations of human rights and not allow them to continue their crimes against the Iranian people.

This horrific crime has taken place despite a global campaign calling on #Iran's regime to revoke #NavidAfkari’s death sentence. A number of governments, international organizations & athletes from across the globe had joined the call to save Navid’s life.https://t.co/HQWlGxamp6

The people of Iran will not accept the injustice of Afkari’s execution and will remember him as a martyr to the cause of freedom and democracy.

Navid Afkari was sentenced to double executions, prison, and lashings. His brothers were sentenced to a combined 81 years in prison and lashes. The People’s Mojahedin Organization of Iran (PMOI / MEK Iran), has previously reported on Afkari’s unjust sentence and condemnation from human rights groups.

The mullahs’ regime executed political prisoner Navid Afkari after torturing him and obtaining forced confessions. His…