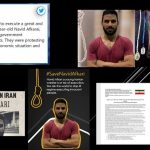 Written by Esmail Mohades on September 4, 2020. Posted in NEWS 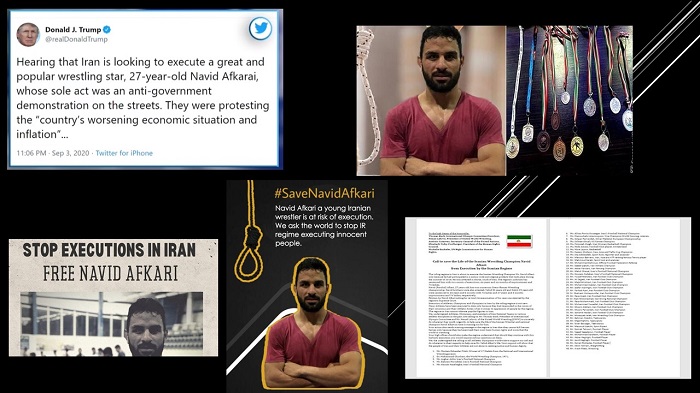 (PMOI / MEK Iran): Maintaining silence about torture and crime against humanity would amount to the trampling of the values that tens of millions of people have given their lives for.

Worldwide condemnation and protests have sprung up over the Iranian regime’s criminal decision to execute Navid Afkari and impose harsh prison sentences against his two brothers – Vahid and Habib – for taking part in protests in 2018.

The Shiraz judiciary sentenced Navid, 27, to double execution, Vahid to 54 years behind bars and 74 lashes, and Habib to 27 years in prison and 74 lashes. The sentences were upheld by the Supreme Court and rejected appeals.

The regime authorities now claim to have security camera footage showing Navid murdering a security force agent, but Afkari’s lawyer tweeted that he has seen the footage and that is in no way proves such a crime took place, with other legal experts saying that the footage lacks any credibility.

To pave the ground for Navid Afkari execution, the Mizan news agency—associated with the mullahs regime’s judiciary—published a report claiming to show the murder scene. In line with this initiative, judiciary chief Ebrahim Raisi tweeted in Persian, “Justice will be implemented with strength.” It is worth noting that Raisi is best known for his leading role in the 1988 massacre of over 30,000 political prisoners, consisting mostly of members and supporters of the Iranian main opposition the People’s Mojahedin Organization of Iran (PMOI / MEK Iran).

Maryam Rajavi, President of the National Council of Resistance of Iran (NCRI), urged the Iranian public to rise up in protest at these sentences, issued against men who were tortured in prison and called for the rest of the world to condemn the regime for this.

She tweeted: “The vicious tortures inflicted on Navid Afkari and his brothers are outrageous. I call on everyone to rise in support of the Afkari brothers and convey their voice throughout Iran and the world. I urge the UN Security Council, UN Secretary-General, UN High Commissioner for human rights, and the EU to condemn the vicious tortures inflicted on the Afkari brothers in Iran and take urgent action to secure their immediate release. Maintaining silence about torture and crime against humanity would amount to the trampling of the values that tens of millions of people have given their lives for.”

Reporting by PMOI/MEKIran, September 2, 2020—There is a wave of protests and criticism from inside Iran and across the…

Navid described the tortures inflicted on him in a letter sent out from prison last September, including:

The US State Department tweeted: “Navid Afkari is a young man that is struggling for the pride that [Supreme Leader Ali] Khamenei’s regime has long deprived the Iranian people of. Khamenei’s thugs have tortured Navid to such an extent in order to obtain coerced confessions from him. Not satisfied with their effort in destroying Navid’s dignity, now they have sentenced him to death.”

Hearing that Iran is looking to execute a great and popular wrestling star, 27-year-old Navid Afkarai, whose sole act was an anti-government demonstration on the streets. They were protesting the “country’s worsening economic situation and inflation”…

WASHINGTON (Reuters): U.S. President Donald Trump on Thursday called on Iran not to execute champion wrestler Navid Afkari, citing a Fox News report that Afkari had been sentenced to death for participating in anti-government demonstrations in 2018.

The Afkari’s mother, Bahie Namju, described the sentences as unjust and urged the global community to act to save Navid’s life and free his brothers, noting that they should not be subjected to heavy sentences for demanding a better life.

6)
Navid Afkari’s mother is pleading to the world for help to save her son.

The thread sheds light on the case of her three sons placed under torture & forced into confessing to crimes they did not commit.#SaveNavidAfkarihttps://t.co/OydGYHXtUs