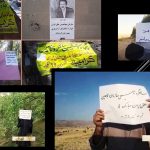 Iranian Resistance Units Celebrate the 55th anniversary of the Formation of the MEK.

Written by Amineh Qaraee on September 6, 2020. Posted in NEWS 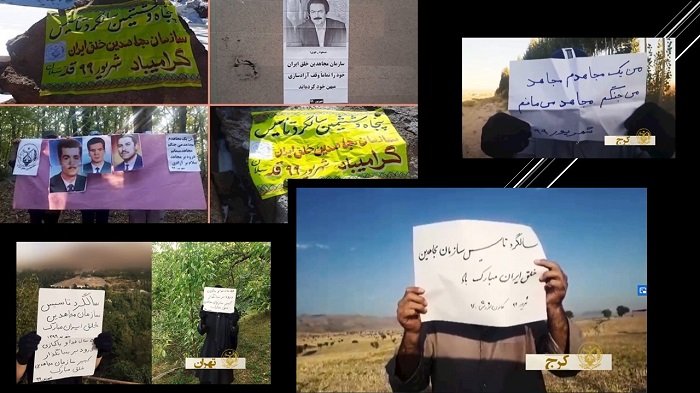 Activities of the Iranian Resistance Units, the internal network of the People’s Mojahedin Organization of Iran (PMOI / MEK Iran), across the country— September 2020.

From 1 September 2020 to 4 September 2020 Iranian Resistance Units across Iran celebrated the 55th anniversary of the formation of the People’s Mojahedin Organization of Iran (PMOI / MEK Iran). The MEK network organized activities throughout the country, marking the MEK’s 55-year fight against the oppression of two monarchy dictatorships, the Shah and Khomeini theocracies.

The Resistance Units created banners, handwritten posters, and graffiti using slogans from the Iranian Resistance Leader Massoud Rajavi and the President-elect of the National Council of Resistance of Iran (NCRI), Maryam Rajavi.

They also denounced the death sentences which have been recently issued against arrested protestors from the two uprisings of 2018 and 2019. This includes Navid Afkari, a 27-year old wrestling champion in Iran who has been sentenced to death for his part in the August 2018 uprising in Fars province. “No to execution, political prisoners must be freed,” and “The regime cannot maintain its rule by executing sports champions” their slogans declared.

Further tribute was paid by the MEK Resistance Units to the 1,500 martyrs who were killed across Iran by the Revolutionary Guard forces during the November 2019 uprising. The Resistance Units put flowers beside pictures of the victims and proclaimed their vow to continue their fight for freedom.

During this time, Iranian youths also took a stand and targeted the regime’s most oppressive institutions, demonstrating the power of Iranian society. An IRGC Basij base in Basij was torched by the defiant youth. The Basij are one of the cruelest and despised paramilitary forces in Iran and are a subsidiary of the Islamic Revolutionary Guard Corps. The main purpose of the force is to protect the order of the mullahs’ regime through physically oppressing the Iranian people, such as the crackdown of protests and demonstrations, including the November 2019 Iranian uprising.

A history of the MEK’s struggle and defiance.

On 6 September 1965, the MEK was established by three Iranian intellectuals, Mohammad Hanifnejad, Saeid Mohsen, and Ali Asghar Badizadegan. The MEK is now the most enduring and primary opposition to the Iranian regime.

After braving imprisonment and torture, the Shah executed the three founders of the MEK by firing squad in 1971. Massoud Rajavi, one of the last remaining senior members of the MEK, became the leader of the organization, after managing to escape the death sentence with the aid of his brother Kazem.

When Ruhollah Khomeini seized power in Iran after the 1979 revolution, the MEK was vocal about the exploits of the new regime, such as the repression of women, minority groups, and all opposition forces. The MEK garnered support across Iran, particularly amongst the youth and intellectuals, for being the primary defender of democratic freedom. The organization became the largest political movement in Iran in less than two years.

The MEK organized a peaceful, unarmed protest on 20 June 1981. Khomeini ordered the IRGC to open fire on the protest and banned the existence of all opposition forces against the regime. Following this, the regime executed and murdered around 120,000 people, many of which had ties to the MEK.

Over the last 55 years, the MEK has been the primary movement fighting against the Iranian regime’s theocratic dictatorship. The ideals and democratic views of the MEK are an inspiration for the younger generation who follow in the MEK’s footsteps and form MEK Resistance Units in order to continue the struggle for freedom.