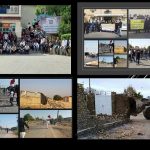 The Iranian regime in fragile position after ongoing protests in Iran.

Written by Mohsen Aboutalebi on September 3, 2020. Posted in NEWS 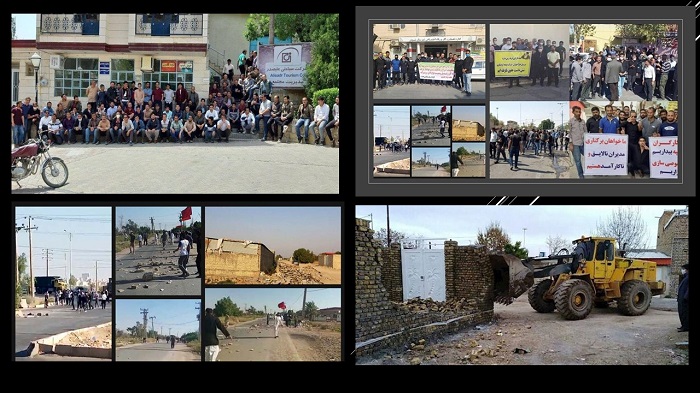 As of the 3 September, 2020 employees of Iran’s oil and gas refineries, petrochemicals, and power plants have been on strike for a month. The strikes have spread to dozens of cities across 12 provinces of Iran. At the same time, workers of the Haft Tappeh Sugarcane Company in Shush, Khuzestan province, have been protesting and on strike for over two months.

The Iranian regime in deadlock.

The regime now finds itself caught in a deadlock trying to manage the growing strikes. The mullahs wish to stop the protests from taking place in any more areas. However, Iranian society is currently in a state of unrest, particularly the laboring community, and so the regime has yet to take drastic action to halt the strikes. They fear a violent crackdown may lead to even more protests and nationwide uprising.

10,000 workers in #Iran's O&G fields have been striking since Aug-20. Despite all repression attempts their strike holds firm. Though the industrial action is centered in South Pars, work stoppage has spread to Mashhad, Tabriz, Urmia, Isfahan #IranProtestshttps://t.co/kO6kcjj3fJ pic.twitter.com/mQD4W2gkim

The mullahs are attempting to wait out the strikes, hoping that the workers, who have been without their wages for months, will tire and give in to economic pressure. If they meet the reasonable demands of the protesting workers in this case then this will hold them accountable to further cases of striking. Other laborers may be encouraged to take a stand for their rights and the regime wants to avoid having to meet the people’s demands at any cost.

The regime is also using its repressive intimidation tactics, threatening the workers with prison and even death sentences to try and cause a rift between them. They have now started to issue death sentences to the protesters who were arrested during the 2019 uprising, sending a clear message of what could happen to anyone who defies the order of the regime.

The Haft Tappeh workers have vowed not to end their strike until the following demands are met, as previously reported by the #MEK: Immediate payment of delayed workers’ wages; Renewal of workers’ insurance benefits;https://t.co/Z8XUw9YfBl #Iran pic.twitter.com/sEYI5ST7Wk

Another instance of the regime’s oppressive methods is that following the execution of Mostafa Salehi, a peaceful protestor of the 2018 uprising in Iran, the regime has now ordered the confiscation of his home. Salehi’s wife and children still reside there and the regime is using this to demonstrate that not only will the lives of the workers be at risk but also the future of their families.

False accusations are often made by the regime in order to cruelly punish anyone who calls for change, using the individuals as public examples. For example, three brothers in Shiraz, who took part in the 2018 uprising, have been sentenced to execution, imprisonment, and flogging. These sentences are based upon numerous false allegations by the regime of membership of opposition groups The People’s Mojahedin Organization of Iran (PMOI / MEK Iran), propaganda activities against the regime, insulting regime Supreme Leader Ali Khamenei, insulting regime agents, and several more.

What are the demands of the people of #Iran? #FreeIran2020 pic.twitter.com/4VYyypoqoN

The regime is attempting to cause fear among Iranian society and discourage people from the further uprising. They are witnessing how the people of Iran respond to these sentences and will enforce them if they believe there won’t be any uncontrollable retaliation. To challenge these criminal sentences, Maryam Rajavi, President-elect of The National Council of Resistance of Iran (NCRI), is calling upon the Iranian people, particularly the youth of Fars and Kazerun, to condemn and protest against them.

The regime faces resistance to exploitation in Abolfazl village.

The resistance of the Iranian people can also be seen in the recent clash in Abolfazl village, Ahvaz. The Mostazafan Foundation is a deceitful government-run organization and claims to be a charity foundation. They now suddenly argue that they own the land of Abolfazl, despite all evidence suggesting otherwise. They have attempted to force the local residents out of their homes, many of whom have lived there for over 40 years.

Workers of #Iran’s oil and gas refineries, petrochemicals, and power plants, have been on strike for a month.#IranProtestshttps://t.co/xfRP9YAGdE

The Mostazafan Foundation is just one of many government-run institutions that exploit the wealth of the Iranian people, two-thirds of whom live in poverty. The acquisition of this land is simply motivated by economic gain with total disregard for the homes and lives of the residents.

In an open letter to Khamenei in 2018, the former regime president Mahmoud Ahmadinejad disclosed that the Mostazafan Foundation, along with seven other foundations claiming to be charities, have a collective wealth of more than $161 billion. The report, published to Ahmadinejad’s website, stated “The people are unaware of their work report, income and consumption,”

Reporting by PMOI/MEKIran, September 1st, 2020—The workers in Iran's oil and petrochemical industries and power plants…