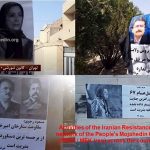 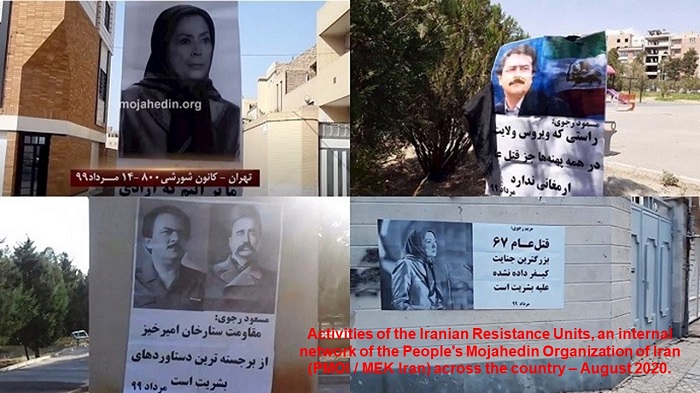 From Saturday, August 1st, to Tuesday, August 4th, Iranian Resistance Units who are part of an internal network of activists of the People’s Mojahedin Organization of Iran (PMOI / MEK Iran), have been organizing activities promoting regime change in Iran.  They left graffiti in public places of the following cities:

The handwritten messages and slogans speaking about the Iranian Resistance Leaders, Massoud Rajavi and Maryam Rajavi were scribbled on walls.

On August 4th, rebellious Iranian youths attacked an IRGC Basij base in Karaj. Basij is a hated paramilitary force and a division of the terrorist IRGC. It is used to stop protests and demonstrations like the November 2019 nationwide uprising, but it uses terrorist tactics to quell dissent. The rebellious youth burned images of Ruhollah Khomeini, the founder of the current regime, and Supreme Leader Ali Khamenei in a number of cities including:

The Resistance Units commemorate every year the slaughter of 30,000 Iranian political prisoners in 1988. This was an unforgettable crime that took place because Ruhollah Khomeini wanted to purge Iran’s prisons of members and supporters of MEK. The Resistance Units and the supporters of the MEK have paid a visit to mass graves where they were told those murdered in 1988 were buried in secret. Handwritten messages in remembrance of the martyrs and calling for the prosecution of the perpetrators were spread throughout the area.

Iranian Resistance Units, an internal network of the People’s Mojahedin Organization of Iran (PMOI/MEK) during the whole month of July.

On August 5th, 1906, following 20 years of the Iranian people’s struggle against the supreme reign of the Qajar dynasty kings they succeeded in getting their first Mozaffaraddin Shah who was forced to accept the parliamentary monarchy position and endorsed the mandate for a constitutional monarchy. The MEK just continues the struggle of Sattar Khan and Mossadegh for Iran’s freedom.