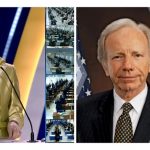 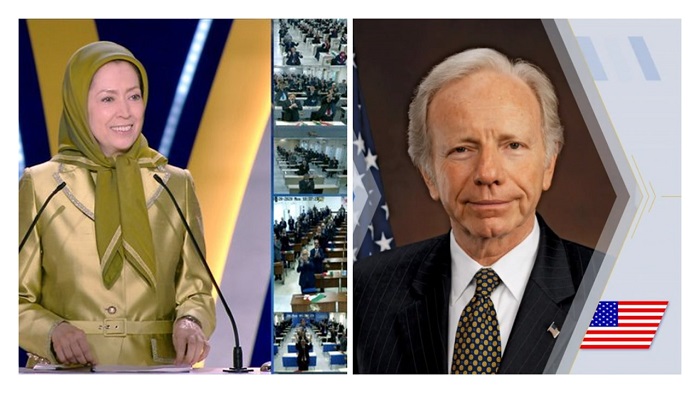 Okay, thank you for that gracious introduction. I’m really honored to be with you here today via Zoom. And I’m grateful to Rudy Giuliani for hosting Bob Torricelli and me. Listening to Rudy just now, he remains as great a prosecutor today as he was in his career.  And I would say if I were the judge, I would find the regime in Tehran guilty as Rudy has charged them.

'We will stand with you every step of the way' – Speech by Hon. Joseph Lieberman (@JoeLieberman) at the July 13, 2019 'Free Iran" conference held at the #MEK's newly inaugurated '#Ashraf3' in Albania.
https://t.co/irkLGzbwgA

I bring greetings from my wife Hadassah who was thrilled to be with me in Ashraf last year. And I must say it was humbling because when we left I was convinced that Hadassah was much more popular than I was. But she sends her love and her support to you.

It’s an honor to be with the National Council of Resistance of Iran (NCRI), and the (PMOI / MEK Iran), and particularly with your great leader, my dear friend, Maryam Rajavi. This is a historic event. I don’t believe, I think we’ve made it into the Guinness Book of World Records, I don’t believe there has ever been this large a global meeting on Zoom in history. So, it is really impressive. And let me tell you that an event like this does not happen without not only hard work but an organization such as the NCRI that once again has proven its determination, its competence, and its persistence to do things that others would never try to do. And that happens because of the commitment to principle and purpose that’s part of the NCRI.

And of course, no organization succeeds without a strong leader. And this organization has the strongest of leaders in Maryam Rajavi, a woman of faith and principle and intellect, a modern woman, a woman of strength, and someone who most of all loves the people of Iran and works with a tremendous determination for that day that is coming soon, and it’s the purpose of our gathering today when the people of Iran will be free. So, I am proud to join you and Rudy and everybody else is saying I stand with Maryam Rajavi.

Iranians across the globe are gearing for today's #FreeIran2020 online event

Sen. Joe Lieberman had powerful remarks at last year's rally: "President Trump has been heroic & historic in taking the actions he has to break the Iran nuclear agreement."pic.twitter.com/QzUZi1kmhN

Now I want to say to all of you who are a part of this historic meeting that you have also joined the journey of history.

And freedom and you have joined the side of freedom, freedom fighters all. And I say it started with creation because from the creation every person on earth was given the birthright, the right by birth to be free. This is what the patriotic founders of America put into the first words they wrote in their Declaration of Independence in 1776, that there are self-evident truths, and one of them is that every person has the right to life, liberty, and the pursuit of happiness, not as a result of the great men who wrote that document or the philosophers of the Enlightenment, but as an endowment from our creator, an endowment from God. That’s what motivated them, the heroes, the patriots of the American Revolution, to take on a fight that no one thought they could win. They were fighting for their freedom from the most powerful empire of the day, the British Empire

And the tremendous resistance to Nazism and fascism during the 20th century, and of course the people fought against all odds against the tyranny of the Communist Soviet Union and prevailed. All of you who are here today around the world and particularly the heroic MEK resistance fighters in Iran, have put yourself in the path of those who preceded, fighting against odds that others thought were insurmountable, and yet emerging victorious as you are today.

You know, a great American leader, Dr. Martin Luther King, famously said the arc of the moral universe bends slowly but it bends toward justice. But he also understood and he said that each of us has the capacity to bend that arc more quickly toward justice and freedom than it otherwise would bend. And that’s what you are doing today.

I am proud as an American to stand with the NCRI, the MEK, and Maryam Rajavi because your values are American values. Your interests are American interests. And your enemy, this fanatical, aggressive, oppressive, tyrannical, terrorist-supporting, corrupt regime in Iran is our enemy.

As America looks for ways to change this regime, to end this threat to our security from the regime in Iran, there is no better ally, there’s no more natural alliance than with the NCRI. Is there another opposition group, frankly is there another—are there many groups in the world who could have organized a meeting like this globally? I don’t think so. Is there another group in opposition to the Iranian regime, on behalf of the Iranian people, with support in Iran, anywhere near the NCRI? No. So, I say to the skeptics and the doubters and the paid lobbyists against the NCRI, what we are doing in America, those of us who so strongly support the NCRI and Maryam Rajavi, who you will hear during this day, is doing what is not only the interest in our universal values of freedom as expressed in the Declaration of Independence but in the interests of the security of the American people today whose security is threatened every day by the fanatical regime that controls Iran today.

Rudy had said it, others have said it, this regime is weakening. The decision of the Trump administration to get out of the Iran nuclear deal was stepped in the right direction, the maximum pressure has weakened the regime in Iran. The increasing courage and protests from the Iranian people give us hope that the day that we’re dreaming of is coming.

There are still people who will say to you here in America, and they will be here until we defeat their arguments, “Okay, let’s go back to the table and negotiate with this regime in Tehran.” But they haven’t learned. We tried that and the regime in Iran still brutally suppresses the human rights of their people.

Lieberman: I have a dream that Muslims, Christians and Jews would sit one at a table of peace. #Iran. #FreeIran pic.twitter.com/NStZsbMr0B

Should I continue? Okay, sorry. I was hoping you were hearing from me.

Let me say therefore that we have reached a point where we can conclude after all that has been tried with this criminal syndicate that is holding the people and history and culture of Iran hostage, that everything that has been tried has not worked. And since the regime in Tehran has proven itself that it will not change, we must together act to change the regime.

It will come from the MEK resistance fighters in Iran, so many of whom we’ve seen today. And when they do turn their resistance into rebellion, we and the rest of the world, particularly in the United States, must stand with them and support them. I am convinced that is a day that is coming. And I am ready, Hazer, for that day.

Hazer. It’s ready to liberate the economic dreams of the people of Iran from the thieves who have stolen their future from them. It’s ready to again bring forth the great culture of Persia and Iran. It’s ready for the peace that will come to the Middle East and so much of the rest of the world when there are a new regime and a new day.

Now, I want to close by trying to make another little bit of history. And I want to ask you to join me from wherever you are, 30,000 locations, hundred plus countries in the world.

Thank you, God bless you.