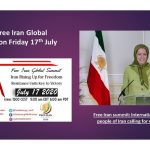 Written by Mohsen Aboutalebi on July 17, 2020. Posted in NEWS 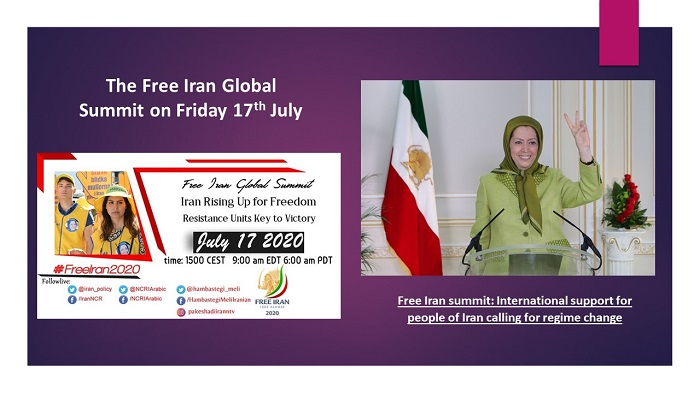 The National Council of Resistance of Iran (NCRI) is holding its annual Free Iran Summit online today, July 17th. Unlike previous summits, it had to alter the way it is being held. In 2018, it was held in Paris, but there was a failed bombing attack on it which was foiled by European police. In 2019, the venue was switched to the NCRI’s (and the main component of that alliance, the People’s Mojahedin Organization of Iran (PMOI / MEK Iran) base at Ashraf-3 in Albania. Today, it is expected that although the event is online the attendance will surpass all other previous events, with over 100,000 Iranians, located all over the world, taking part. In addition to all these rank and file supporters of the Iranian resistance movement, there will be over 1,000 foreign participants, drawn from governments, political parties and those who support the Iranian opposition.

Iran Rising Up for Freedom | Resistance Units Key to Victoryhttps://t.co/tGC1qFHgvk

The main aim of the summit will be to convince international authorities to support the Iranian resistance’s project to replace the current clerical regime with one that is free, democratic, and secular.

Iranians have been protesting against their regime more vigorously than ever in the last few years. These protests have been met by brutal suppression with many killed and imprisoned. Those who have been imprisoned have been subject to the callous disregard for life that characterizes the current mullahs’ regime, as many prisoners have been infected by Covid-19 as the epidemic has swept through Iran.

In November 2019, protesters took to the streets because of a sudden steep rise in fuel prices that impacted the poorest in the country the most. Over 1,500 protesters were slaughtered by the IRGC (Revolutionary Guards) and thousands more imprisoned. Despite the repression, it didn’t stop more huge protests in January this year after the IRGC mistakenly shot down a Ukrainian commercial airliner killing many innocent people. There have been sporadic protests across many Iranian cities since, many of which have been spearheaded by MEK resistance units.

The recent upsurge in protests is in most part due to a perception that the regime is weakening and has little real popular support. It’s poor management of the Covid-19 crisis has strengthened public opposition to the regime. The Iranian opposition movement understands that this regime’s weakness would become even more vulnerable if there was a more consistent pressure applied to it from Western governments and not just from the United States.

One of the central objectives of this year’s Free Iran Summit is to provide more succinct policy proposals that can be implemented by the governments of those foreign delegates who are participating in the Summit. Some of the fresh ideas will no doubt come from the delegates themselves but will be supplemented by suggestions from thePresisdnt-elect of the NCRI, Mrs. Maryam Rajavi, one of the main leaders of the Iranian resistance. It is hoped that there will be a fruitful dialogue between Iranian opposition figures and foreign delegates that can help to provide more meaningful cooperation between foreign governments and the Iranian people who are hopeful of change.

The NCRI points out that regime change in Iran must come at the hands of the Iranian people themselves and not by any kind of foreign intervention in Iran. Many Iranians have been demanding change ever since the Iranian revolution in 1979 that saw the Shah deposed. Instead, they witnessed the replacement of one dictatorship by another. This fact has not yet been fully recognized by Western governments.