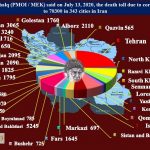 State Media: Coronavirus Was a ‘Savior’ that Helped Regime ‘control the anger of defiant people’

Written by Jennifer Jones-Kelley on July 14, 2020. Posted in NEWS 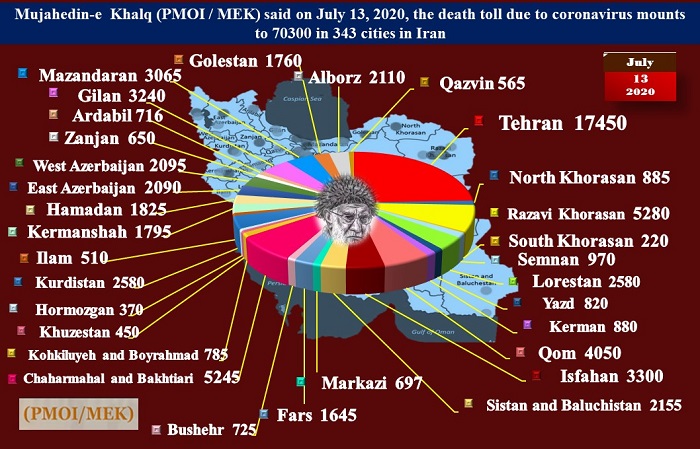 (PMOI / MEK Iran): more than 70,300 people in Iran have died from the novel COVID-19 since the beginning of the pandemic.

According to a July 13 announcement from the (PMOI / MEK Iran), more than 70,300 people in Iran have died from the novel coronavirus since the beginning of the pandemic. The deadly disease has sowed chaos and destruction in every province in Iran, creating what any other government would regard as a crisis.

A new article published in the state-run Mostaghel daily suggests that the Iranian regime has used the coronavirus as a means to deflect attention away from the widespread social unrest that led to the November 2019 and January 2020 uprisings. The article further warns that once the pandemic is over, the people will not forget how they were abandoned and the consequences will be catastrophic for the regime.

The series of anti-regime uprisings of recent years were the logical and historical continuation of the blood-drenched line drawn on June 20, 1981, the uprisings which began in December 2017 and culminated to a raging uprising in November 2019. #Iran #FreeIran2020 pic.twitter.com/p3uXJrjdEV

The November 2019 Uprisings were triggered by a sudden gas price hike, but the protests were fueled by long-standing resentments over economic issues, and government corruption and oppression. Millions poured into the streets to demand the overthrow of the regime in its entirety. The regime shut down the country’s internet, deployed the armed forces, and fired on protesters from helicopters in a massive suppressive effort. Finally, after killing more than 1,500 protesters and arresting 10,000 more, people returned to their homes. “Fear of bullets and pressure pushed the people, who had hopes of a better life, back,” the article stated. In January, the people rose up again to protest the regime’s cover-up of the downing of a Ukrainian airliner.

“A gift from heaven”

The regime knew about the initial outbreak of COVID-19 in Iran for several weeks before alerting the public, as the (PMOI / MEK Iran) reported before the outbreak was made public. According to the article: “Now, a savior was needed to divert people’s attention from the November and January incidents. So, came the novel coronavirus. The government used people’s fear of this invisible enemy to unleash the dragon among them. Long before its public announcement, COVID-19 had come or had been brought to Iran. But to defy Trump, they held events marking the 41st anniversary of the 1979 revolution. And to slap those dissatisfied with the approbative supervision, the Parliamentary elections were held as scheduled. Then they said: we just found out about the virus’ existence, so people watch yourselves.”

The article states, “The Coronavirus was a gift from heaven and a savior.”

The author theorizes that the regime failed to contain the virus because it provided a useful distraction from social unrest and allowed the government to continue oppressing its people and mismanaging its resources without being bothered.

The article stated, “Thus, they [the authorities] left hungry and depressed people alone in a room with a lion and waited for the work to be done. Meanwhile, without attracting any attention to the skyrocketing prices, some courts were held as though they were held in a normal situation; each session could have created a fuss, abandoning the country’s forests to burn in fire and issuing death sentences for the detainees of the November incident.”

The article notes that while the coronavirus may have saved the regime, for now, it is not a permanent solution. “But they should not forget that COVID-19 will end one day. Then these wounded and deprived people will have nothing else left to lose. When their anger erupts, it will fight until the [regime’s] destruction, and you would see what you do not want to see. If they had used the coronavirus situation to help people, to repair their reputation, undoubtedly, those marginalized people could have played a pivotal role in balancing the situation in the future,” the article says.

“This nation will not forget how it was abandoned during these bitter days.  This will affect the upcoming incidents,” the author adds.

The article summarizes the regime’s coronavirus strategy as allowing the disease to spread unchecked in order to “relevantly control the anger of defiant people.”

The author follows by writing, “But I wish that the suffering and illness of the people were not used as a cure for obliviousness and a means of revenge for the events of November and December.

“Because soon, people will come to their table for eating, and their despair of an empty table will lead them to protest on busy streets.”

Mrs. Maryam Rajavi,the President-elect of the National Council of Resistance of Iran’s (NCRI): The rapid rise in the number of COVID-19 victims is the strategy of mass casualties to forestall the danger of an uprising and their overthrow.

The secret to our progress over the 40 years of struggle against the religious fascism in #Iran, has been persistence, perseverance and paying the price of freedom. #FreeIran2020 pic.twitter.com/y0HUjdycVW