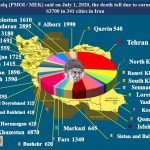 Written by Jennifer Jones-Kelley on July 2, 2020. Posted in NEWS 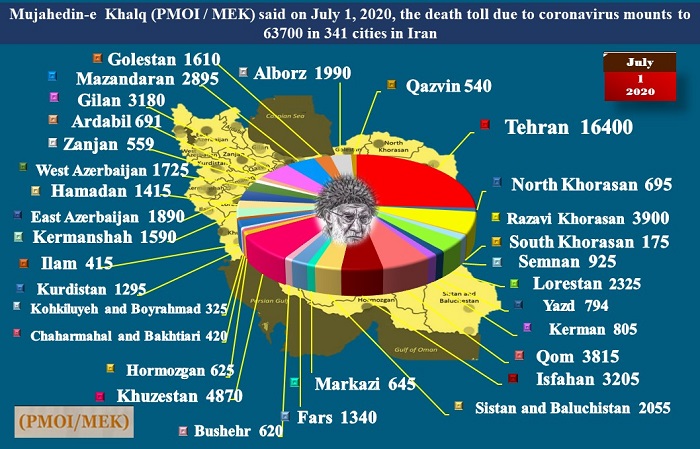 On Wednesday, the (PMOI / MEK Iran) announced that more than 63,700 people in 341 cities in all 31 provinces in Iran have died from the novel coronavirus since the pandemic reached Iran in February.

The recent surge in coronavirus cases has filled hospitals beyond capacity and forced regime officials to react after weeks of pleas from doctors and local officials. On Wednesday, the Mehr news agency reported that the Deputy Health Minister Iraj Harirchi imposed quarantine restrictions on eleven Iranian provinces. However, this measure may come too late in regions where hospitals are already beyond capacity, and it is likely that many will die outside of hospitals because of the regime’s delayed action.

More than 63,700 people have died of the novel #coronavirus in 341 cities checkered across all of #Iran's 31 provinces, according to the Iranian opposition PMOI/MEK.

Hospitals in Tehran are already being forced to turn away patients. In an interview published Tuesday in the state-run Hamshahri daily, the Director of the Infectious Diseases Department at Masih Daneshvari Hospital in Tehran said, “The number of hospitalized patients has exceeded the number of discharged patients … The unavailability of beds has made it impossible for us to be able to hospitalize some of them. In our opinion, Tehran is red.”

Conditions inside hospitals are deteriorating rapidly. In a Tuesday report on the state-run ISNA, the Deputy Head of the National Coronavirus Combat Taskforce (NCCT) said, “We are facing exhaustion and extreme fatigue among the medical staff. The continuation of this process severely weakens their ability … and will lead to a very sharp increase in mortalities… The capacities are limited, and soon 100% of the ICU beds will be occupied.”

On Wednesday, a Majlis (regime Parliament) Deputy posted on the Majlis website: “Government officials did not make a single, decisive, and comprehensive decision to control the Coronavirus. They failed in making smart decisions to get the desired results. It is now too late because we have lost many of our fellow residents due to the virus, and the country has incurred great costs.”

According to the regime’s Deputy Health Minister, Khuzestan Province is home to one-third of confirmed coronavirus hospitalizations and deaths in Iran.

In an interview with the provincial television network on Tuesday, the Acting Director of Khuzestan’s Health Center said, “The number of incoming patients is beyond the capacity of hospitals and has endangered the tolerance of our treatment system. If the situation continues as such, extreme exhaustion among the medical personnel will harm the treatment of the patients. The shortage of beds and ICU beds increases the danger of deaths.”

The Director of the Immunology Department of Birjand’s University of Medical Sciences in South Khorasan Province expressed concern about the rising coronavirus death toll in a Tuesday interview with Hamshahri daily. He said, “The number of Coronavirus infections in South Khorasan Province has increased ten-fold. All hospital beds are occupied. Earlier, the number of Coronavirus-related hospitalized cases were four to five people per day. Now it is between 45 to 50, daily. The number of deaths due to Coronavirus in the country is expected to reach 90,000 by the end of September.”

In a Tuesday article in Rooz- No, the President of the Medical Sciences University in Zanjan Province commented on the impossibility of treating the rapidly increasing number of coronavirus patients in the province. “In the past two days, more than 500 have been hospitalized throughout the Province, which represents a three-fold increase relative to previous days. It may increase four-fold today. All beds in the Province’s hospitals are full, with half of them allotted to Coronavirus patients. The treatment section is facing a shortage of personnel,” he said.

On Wednesday, the Governor of Western Azerbaijan Province told the state-run IRNA that eleven cities in the province are now red. In a report by the state-run ISNA, the President of the University of Medical Sciences at Western Azerbaijan was quoted as saying, “We would be obliged to install field-hospitals in the province if the number of infected patients continues to increase.”

Mrs. Maryam Rajavi is the President-elect of the National Council of Resistance of Iran’s (NCRI): The growing and a shocking number of victims across the country, especially in Tehran is a direct result of Khamenei’s and Rouhani’s criminal policies that in clear conflict with the relevant ministries and regime experts have sent workers to face the Coronavirus epidemic instead of coming to people’s aide and locking down non-essential activities.