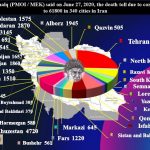 MEK Iran: Over 61,800 Iranians Have Died From Covid-19 According to Opposition 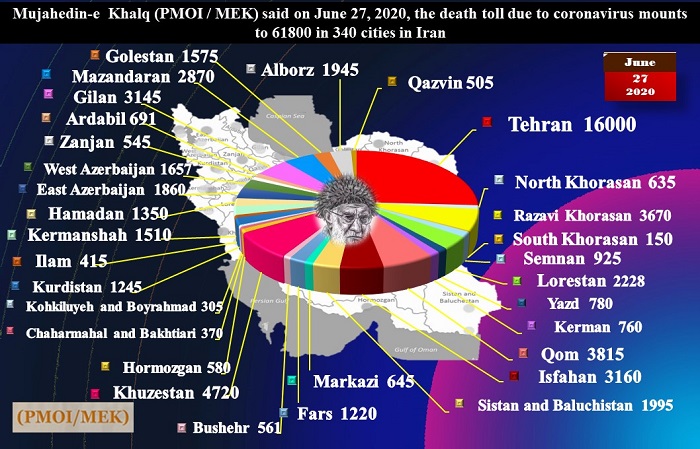 According to, the People’s Mojahedin Organization of Iran (PMOI / MEK Iran) Coronavirus death toll is over 61,800.

According to figures obtained by the main Iranian opposition, the People’s Mojahedin Organization of Iran (PMOI / MEK Iran) over 61,800 Iranians have now perished due to contracting Covid-19. This figure is far higher than the official figure released by the Iranian regime, which has reported that there have only been 10,239 people who have died.

Over 61,800 people have died of the novel #coronavirus in 340 cities checkered across all of #Iran’s 31 provinces, according to reports tallied by the Iranian opposition PMOI/MEK as of Saturday afternoon local time, June 27.https://t.co/9djjlCGbmu

Up to date fatalities across many Iranian provinces are as follows:

The following provinces are in code red: Bushehr, Kermanshah, Kurdistan Khuzestan, Hormozgan, and West Azerbaijan. Alborz, East Azerbaijan, and Razavi Khorasan are experiencing a spike in numbers. According to the Iranian Health Ministry, there have been 2,628 new infections in the last 24 hours and 109 deaths. Over 2,100 patients in Iranian hospitals are in critical condition.

Many villagers are dying without their deaths being registered, soothe real death toll is likely to be far higher than those reported although no-one will probably ever know. In many cities, physicians and health authorities are reporting a new surge in both infections and fatalities. An example is the reported doubling of infections in Mahabad since May 21st.

Many people who die from Covid-19 related deaths are being recorded as dying from other causes, such as chronic breathing disorders. Those villagers who are not buried in cemeteries are not registered and therefore not part of the official death count for the disease. In some cases, it has been reported that the regime’s thugs have threatened cemetery officials so that Covid-19 deaths are not recorded.

It has been reported that many hospitals have reached their limits. The head of Public Relations at the Isfahan Medical Sciences University has said that the city is in dire need of more hospital beds. “We will be forced to add one or two new hospitals to address and hospitalize new patients,” he said according to the INRA news agency. Similar sad news has been reported by the dean of the medical sciences university in Golestan province. “Given the current trend, there’s a high probability of a shortage of beds in Gonbad-e Kavus.”

There has also been a huge increase in COVID-19 cases in Boyer Ahmad and Kohgiluyeh provinces. The dean of the medical sciences university in Ilam province was reported by the IRNA as saying that “there are restrictions on declaring the number of coronavirus cases… The number of cases in Mehran, Dareh Shahr, and Chardavol is rapidly increasing. In the past 24 hours, we’ve seen the greatest number of new cases in the past month. While testing has doubled, the number of new cases has tripled or quadrupled.”

#coronavirus has caused the death of more than 61500 people throughout #Iran as reported by the main Iranian opposition #PMOI #MEK #Iranian official death toll only 10130 Most of the deaths have taken place in #Tehranhttps://t.co/xrD7lRb4hI
@USAdarFarsi #MullahCovidHolocaust pic.twitter.com/yWQlTayiNn

According to the dean of the medical sciences university of Jahrom, there has been a huge increase in infections in Fars Province. Jahrom is “in a very sensitive situation.” He said. Of the tests carried out recently, there has been a 50% positive result.

In Ahvaz, about 100 children have been reported to have caught the virus. Unfortunately for them, there are only facilities for this age of the patient in a single hospital, theAlbuzar hospital. According to the caretaker of Jondishapur Medical Sciences University in Ahvaz, “there is only one bed per 1,000 people in Khuzestan, while in other provinces, there are two or three beds per 1,000 patients.”

Qom is another Iranian city experiencing a new surge in infections. The dean of the medical sciences university in Qom has called on more beds to be made available to cater to patients.

Mrs. Maryam Rajavi is the President-elect of the National Council of Resistance of Iran’s (NCRI) said, due to the inhuman policies of Ali Khamenei and Hassan Rouhani, the Coronavirus has spread like wildfire, claiming victims all over Iran.