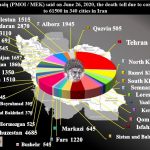 Written by Mohsen Aboutalebi on June 27, 2020. Posted in NEWS 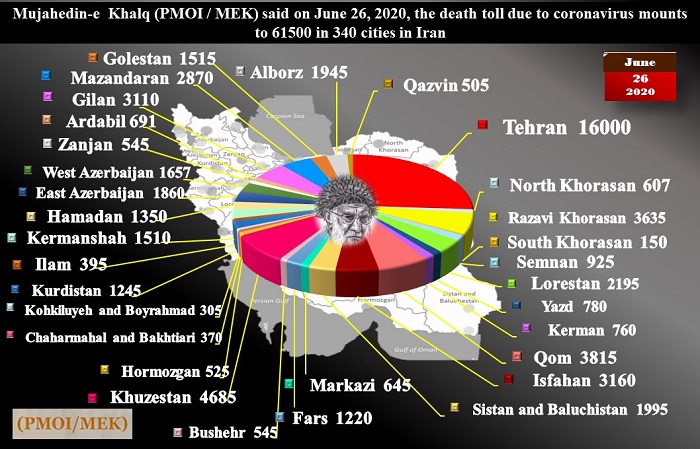 COVID-19 has now caused the death of more than 61,500 people throughout Iran, as reported by the main Iranian opposition (PMOI / MEK Iran). However, the official death toll is calculated as only 10,130. Most of the deaths have taken place in Tehran.

The death toll in some of the provinces includes:

On Thursday, 134 more people lost their lives to the deadly virus.

In Qom and Gilan, almost 40% of its population has caught COVID-19. In Tehran, about 15% have caught the virus. The Health Ministry decided to put the economy before the people and re-open businesses which opened-up more and more opportunities for anyone getting the virus. It stated that more cases of the virus are inevitable as the peak has not yet been reached. But it said it had no choice but to lift restrictions because people needed to work to feed themselves and their families.

Up to 20% of Tehran’s residents have now caught COVID-19 many of which live in District 4, which is home to 900,000 people making it Tehran’s most densely populated area of the city. Alireza Zali, who is responsible for leading Tehran’s COVID-19 task force stated that just in the last day 285 people have been hospitalized and 93 are being treated in ICU. The hospital beds in Tehran are just about full and there has been the need to depend on clinics in Tehran. Tehran’s Khomeini Hospital has seen an increase of 144 percent, just in the last five days, and those in hospital stand at more than 1,500.

A roundup of the provinces

More than 61,500 people have died of the novel #coronavirus in 340 cities checkered across all of #Iran's 31 provinces, according to the Iranian opposition PMOI/MEK. pic.twitter.com/HU3j5on8kV

Mrs. Maryam Rajavi is the President-elect of the National Council of Resistance of Iran’s (NCRI) said today, due to the inhuman policies of Khamenei and Rouhani, the coronavirus has spread like wildfire, claiming victims all over Iran.