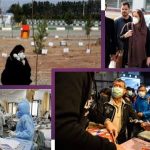 MEK Iran: Coronavirus Outbreak has Claimed the Lives of More than 41,000

As the people of Iran have been saying, the regime is the virus that presents the greatest threat to the people.

The People’s Mojahedin Organization of Iran (PMOI / MEK Iran) has reported that more than 41,000 people have died after contracting COVID-19. The virus has spread to 317 cities across the country and there is a worrying upward trend in a number of areas.

The Epidemiology Committee of the Iranian Ministry of Health has announced that in eight provinces, an upward trend has been noticed, or the beginning stages of a peak.

The Iranian regime is trying its hardest to cover up the reality of the current health crisis and it is reporting that less than 7,000 people have died as a result of Coronavirus. However, this figure is similar to the death toll in Tehran alone.

The #Iranian regime’s officials won’t notice the opening of businesses as their needs are taken care of. https://t.co/eZJT6QHKGF#Iran #MEK #COVIDー19 #COVID19 @USAdarFarsi pic.twitter.com/4SmDii01ha

The PMOI / MEK Iran has been consulting front-line workers across the country, including doctors and nurses, as well as morgue workers, to establish a true figure. The regime has tried to silence medical workers from speaking about the situation they find themselves in, but many are speaking out anyway – horrified that the regime is covering up the gravity of the situation.

Some officials across the country have refused to support the regime and its deceptive policies and they too have been speaking out.

Speaking about the working conditions for garbage collectors in Ahvaz, the local health secretary said that more than 1,800 employees do not have any protective equipment – not even a pair of gloves. The secretary highlighted that these garbage collectors are not just at great risk of contracting the virus, but they could also be contributing to its spread. Mehrdad Sharifi said: “Couldn’t the Headquarters to Execute Imam Khomeini’s Order and the Mostazafan (Abased) Foundation, help organize and cover them at least for a short time to curb the disease?”

IRNA, the regime’s official news outlet, reported that since the beginning of the month, the city of Farouj is seeing a continual increase in the number of patients. It also described the city as being in a “red state”.

Explaining the manipulation of statistics, another state-run new outlet reported that the decrease in the number of deaths being reported on a daily basis is due to the fact that infected patients are now left to die at home where there are taken to the local cemetery instead of going to hospital.

Despite the ongoing risks of the novel #coronavirus, people from all walks of life are holding rallies in different cities throughout #Iran protesting poor living conditions.https://t.co/vqFqkKg5ZX

Since the beginning of the outbreak, the people of Iran have been left very vulnerable. They have been unable to adequately protect themselves because the regime has misinformed them, sent them back to work and reopened religious sites.

Saeed Namaki, the country’s Minister of Health, has held the people responsible for the death toll, saying that people have been complacent and are acting like the threat has ended. However, the only party responsible for this terrible heath crisis is the Iranian regime.

As the people of Iran have been saying, the regime is the virus that presents the greatest threat to the people. Its negligence is criminal and it must be held accountable.