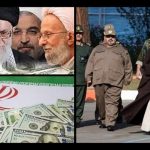 MEK Iran: Corruption in Iran Too Widespread to Eliminate

Written by Mohsen Aboutalebi on May 7, 2020. Posted in NEWS

Corruption a well-known phenomenon in the Iran regime.

The people of Iran have said for many years that the Iranian regime is corrupt to its core. Over the decades, the regime has found it very difficult to hide the corruption that is found at all levels of leadership in the country.

The abuse of power in Iran is truly shocking. There are far too many examples of this to discuss unless one had days to pour over the evidence and examples, but there are many that stick out. One massive abuse of power resulted in the 1988 massacre of political prisoners in which tens of thousands of members and supporters of the opposition were killed during the course of one single summer – simply because they supported a group that is fighting for freedom, equality, and the respect of human rights.

A new report from the National Council of Resistance of Iran (#NCRI) details the #Coronavirus epidemic in #Iran and the corruption, deception, and incompetence that have created a public health crisis. https://t.co/F7GU8Qlx7k@USAdarFarsi #MEK pic.twitter.com/FB0G74STMS

Another example is what the people of Iran are living through right now. The corrupt leadership in Iran has failed to protect the people during this Coronavirus outbreak. Instead of taking measures to contain the outbreak, it is taking measures that endanger the people but fill the regime’s pockets – like the decision to reopen religious sites despite warnings that it would result in a further surge of fatalities.

Corruption is ingrained within the regime. Its values, its laws, its regulations, and even its economic and social system are shrouded with corruption – so much so that it is impossible to remove the corruption without collapsing the whole system. It is this structural corruption that is the most worrying and destructive.

The state-run media outlets are a propaganda tool. The country’s judiciary, parliament, and government implement cruel and unfair rules. The military and police institutions use violence to control the people.

Something that the regime used to hide – or at least to try to hide – is the reality of life in Iran. It employs systematic coverups. With the current Coronavirus crisis, the regime has tried to cover up the extent of the devastation. The most recent death toll it has announced is around 6,000. Yet the People’s Mojahedin Organization of Iran (PMOI / MEK Iran) that has been consulting with medical professionals across the country say that it has exceeded 39,500.

We see this down-playing of statistics that highlight the regime’s failures frequently whether it is to do with poverty levels or the number of unemployed people in the country.

Earlier this year it tried to cover up the downing of the Ukrainian passenger jet. It was clear that the Iranian regime was responsible, but it tried its hardest to deny it until other countries presented evidence. It tried to blame airline staff, it tried to pass it off as an accident, and so on. But the truth always comes out.

The people of Iran know that the Iranian regime will never act in the interests of the people. Reform is completely impossible when corruption is what the regime is founded on. Regime change is the only way the people of Iran will ever be free and it is something that they are determined to achieve.