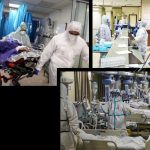 Written by Jennifer Jones-Kelley on May 7, 2020. Posted in NEWS

Due to the premature reopening of the country, the number of coronavirus cases and deaths has begun to climb once more.

The MEK announced on Wednesday that more than 39,500 people in 314 cities in all 31 provinces in Iran have died from COVID-19, the disease caused by the coronavirus. The regime has reported 6,418 of these deaths to world health authorities, leaving the vast majority unaccounted for.

Due to the premature reopening of the country, the number of coronavirus cases and deaths has begun to climb once more, leaving regime officials scrambling to account for their actions and to explain why millions of Iranians were forced to return to work in the midst of an epidemic.

More than 39,500 people have died of the novel #coronavirus in 314 cities checkered across all of #Iran's 31 provinces, according to the Iranian opposition PMOI/MEK. pic.twitter.com/mIHZSD8rmo

Regime President Hassan Rouhani was finally forced to acknowledge the disparity between the government’s official reporting of coronavirus numbers and the actual casualties witnessed by healthcare workers and those who have been affected by the virus.

On Monday, state-television broadcast a meeting between Rouhani and officials from the Ministry of Health. Rouhani attempted to justify the regime’s underreporting of coronavirus numbers, claiming widespread ignorance and confusion about reporting methods.

“There are people who are infected, and no one is informed. They themselves aren’t informed. No hospital is informed. No statistics center is informed. So, we have to agree that the number of cases in all countries across the world can be more than their official numbers… the same with the number of deaths… When an individual has a previous illness, should that be declared as the cause of death or COVID-19… We can count both ways and countries around the world have counted in both methods,” he said.

Posted by People's Mojahedin Organization of Iran – MEK IRAN on Tuesday, May 5, 2020

Health Minister Saeed Namaki attempted to justify the easing of social distancing restrictions but admitted that their reasoning turned out to be faulty saying: “We all expected this virus to gradually be contained during the warmer season. Our warmer provinces, such as Khuzestan, Hormozgan, and Bushehr are now witnessing a rise in coronavirus numbers.”

A rising chorus of prominent physicians is warning about the rising number of coronavirus cases that have sprung up since the country was reopened.

“Due to the relaxing of social distancing regulations from April 11 onward, we have witnessed an increasing trend from mid to late April… Most of the increasing number of cases have been in the cities of Ahvaz, Bavey, Dezful, Shushtar, and Karoun… Most of the cases are in the city outskirts where the locals are poor and living in low-quality conditions,” Farhad Abol Nezhadian, dean of Khuzestan Medical Sciences University, said on Tuesday, in remarks carried by the state-run IRIB television network.

On Wednesday, Seyed Mohammad Alavi, head of the Health Department at Khuzestan Medical Sciences University, was quoted in the state-run Resalat daily as saying: “All cities of Khuzestan Provinces are infected, especially Ahvaz and the cities and towns around it are highly infected. One individual traveling from Ahvaz with COVID-19 to Ramshir, the number of cases suddenly exploded.”

On Tuesday, the deputy dean of the Zahedan Medical Sciences University issued a grim declaration. “Considering the rise in the number of COVID-19 cases across [Sistan & Baluchistan] province in the past two weeks, it appears that we are in the second coronavirus wave,” he said, according to the state-run Borna news agency.

A number of well-regarded physicians are also pushing back against Rouhani’s claims about so-called “white areas” in Iran where the virus has been eradicated.

On Wednesday, the state-run Jahane Sanat daily wrote: “Experts inside the government and others believe that [Rouhani] is naïve about COVID-19’s behavior… The result of these cloaking measures, declaring some virus hotspots as white and low-risk will result in the people not taking this illness seriously at all.”