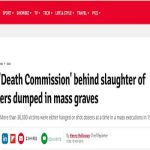 Written by Esmail Mohades on November 20, 2019. Posted in NEWS 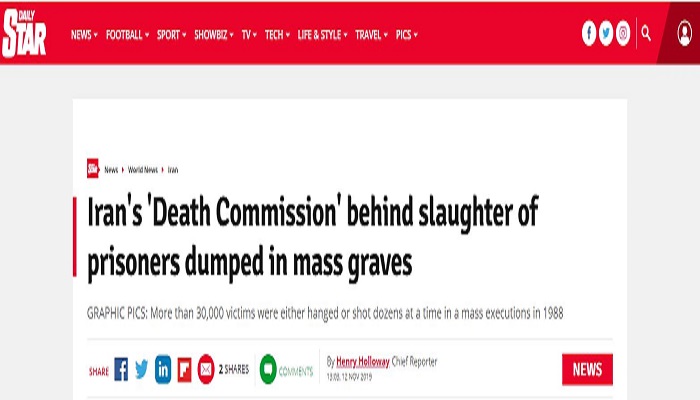 The British website the Daily Star Online reported the release of a new book about the 1988 Massacre in a November 12, 2019 article.

The British website the Daily Star Online reported the release of a new book about the 1988 Massacre in a November 12, 2019 article. The book, entitled “Crime against Humanity,” was written by members of the Iranian opposition coalition National Council of Resistance of Iran (NCRI) and describes the “Death Commissions” which were tasked with carrying out the mass executions of 30,000 political prisoners in the summer of 1988, most of whom were the Mujahedin-e Khalq (PMOI/MEK) members.

In the summer of 1988, Ruhollah Khomeini issued a fatwa calling for the deaths of all supporters of the MEK in Iran’s prisons, wrote the Daily Star. He formed “Death Commissions” to go into the regime’s prisons and carry out the fatwa. Khomeini said that the political prisoners were guilty of “waging war on God” and told his Death Commissioners that they should “not show any mercy.”

Over the course of a single summer, more than 30,000 political prisoners were hanged or shot in mass executions and buried in unmarked mass graves.

“The book ‘Crime Against Humanity’ names 5,015 of the victims, has eyewitness accounts of the massacre, and names the members of the regime responsible,” wrote the Daily Star.

Eyewitnesses recount mass hangings by crane, according to the Daily Star. Groups of 33 people at a time were hanged in “execution yards,” then pulled down and replaced every half hour. Trucks were filled with bodies and taken to mass graves and brought back to be refilled for two weeks.

Another eyewitness account describes a factory assembly hall that was converted into a killing floor after the Death Commission ordered Gohardasht Prison to be emptied. One witness wrote: “The ropes were suspended from the high ceiling. The prisoners, blindfolded and hands-tied, were led onto the stage in groups of 10 to 15.

“There the guards would place the noose around their necks. The prison governor would then hang each one by kicking him from behind and throwing him off the stage.

“Members of the [Death Commission] attended the execution sessions.”

A second witness testified: “If they felt that an inmate hanging from the gallows was still alive, they would grab his feet and pull down his body with all their weight to finish him off.

“In several cases, when they lowered the body, they noticed that the victim was still alive.

“[The prison governor] would say ‘no problem’ and would order the guards to bring the next batch of prisoners on the stage.

“The victim would be taken to mass graves along with other corpses and buried alive.”

“Ebrahim Raisi – the current head of the Iranian judiciary – is accused of leading arrests, torture and executions during the massacre.

By appointing #Raisi,a"Death Committee member"of #1988massacre,as head of Judiciary,various rifts w/in the regime appear 2have chosen to show an outward display of solidarity in the face of domestic &international crises.https://t.co/KEjBs2KNVC #HumanRights #StandUp4HumanRights

“Mostafa Pourmohammadi – a judicial advisor – is thought to have handed down death sentences to all prisoners in Tehran and Karaj.

“And Alireza Avai – Iran’s current justice minister – was one of the leading prosecutors involved in the slaughter,” the Daily Star reported.

“The officials were identified by the NCRI sources and the People’s Mojahedin Organisation of Iran (PMOI) from within their ‘network’ within Iran,” the article added.