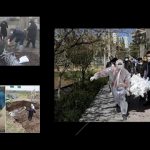 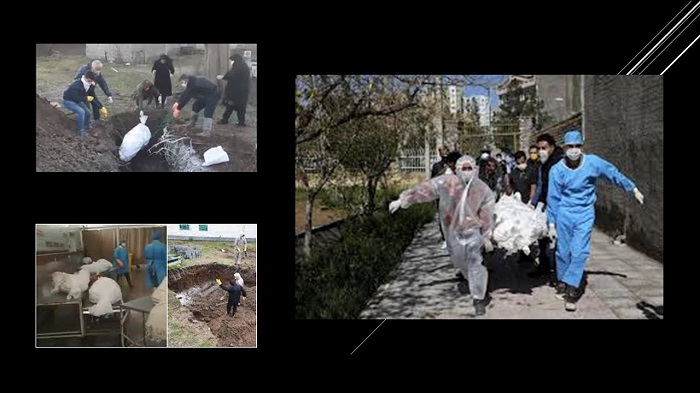 Iran is crumbling as the body bag count caused by COVID-19.

The mullahs’ regime in Iran is crumbling as the body bag count caused by the bungled handling of the spread of coronavirus rises. According to the main opposition in the country, the People’s Mojahedin Organization of Iran (PMOI/MEK Iran), the death toll from the disease sweeping Iran has passed 33,400. The regime is anticipating that an uprising amongst the people is not far off.

The First Vice-President, Eshaq Jahangiri, sounded the regime’s alarm by declaring that there were forces outside the country who were willing to exploit the crisis in the country. He called in vain for the regime’s detractors within Iran to refrain from questioning the daily figures released. He claimed falsely that the regime co-ordinated with the WHO when it released its version of the deaths and new cases of COVID-19.

One of the more bizarre ideas floated by the regime is that it has invented something that has never been heard of before anywhere else in the world. This was a device that used a “magnetic field” to detect the presence of the virus. The device was claimed to have a “bipolar virus” inside, something that had such accuracy that it could detect the virus within 100 meters and was at least 80% accurate.

This fanciful assertion was downplayed by Hesameddin-e Ashena, one of President Hassan Rouhani’s advisor, who said that it wasn’t a good idea to announce such far-fetched ideas through government channels without verification from the Ministry of Health.

The former Minister of Defense and Transportation, Akbar Torkan, was interviewed by the Khabar Fori website on April 6th, 2020. He expressed the fear that the Iranian resistance was getting the upper hand when it came to the disclosure of the real facts within Iran. He referred to what he called the “Tirana virus.” This, according to him, was an additional danger to the coronavirus. He said that the 1,500 members of the MEK, based in Tirana, Albania were manipulating the news about Iran, using their sophisticated network of informers and their “state of the art” facilities in the Tirana camp. “They spread rumors and lies as much as they can,” he said at the interview.

The regime is becoming aware that a new uprising was imminent. This fear is reflected by the many utterances of regime officials, which reveal just how afraid the regime has become a new wave of protests. An analysis conducted by the Asra think tank was published last month by the state-run Mizan News Agency. The analysis was titled “Coronavirus and confrontation at several fronts.” The analysis concluded that although the people in Iran had considerable “resilience,” this was tested by the combination of severe shortages of commodities and the effects of the coronavirus. The report said that localized uprisings and discontent could easily spill over into national protests as there was a lack of a “centralized crisis management mechanism.”

Dissent in #Iran Iran is prevalent, more so now than ever before because the Iranian regime mismanaged the #coronavirus outbreak. https://t.co/1nqZAWmyWc#MEK @USAdarFarsi pic.twitter.com/0WuHBPc1J2

The state-run daily, “Iran-Emrouz,” claimed on April 7th that “We are going to have a major social upheaval after the coronavirus is over. The situation is not going to be calm. It is going to be exactly like the period after the 2017 elections (uprisings), and we are going to see repeated and powerful incidents.”

The head of Tehran City Council’s Health Commission, Haghshenas, said that the continued release of incorrect figures and the lack of clear information was going to cause “irreparable damage to people’s lives and property.” In a report to the state-run Asr-e Iran on April 19th, he said that NCCT officials could be charged with manslaughter if they continued to mislead the public and fail to make the right decisions. He said that the officials could be made accountable for the deaths of the people.

There is more and more evidence that the regime is getting seriously worried about the prospect of a popular uprising. Last Sunday, the state-run Aftab-e Yazdi quoted a regime deputy, Gholam Ali Jafarzadeh, when it wrote that the combination of millions of unemployed people, closures of small and large businesses, a terrible inflation rate and rapidly rising costs of goods was contributing to a “severe economic fever.” The post-Coronavirus era was going to be “terrifying,” according to the daily.

Mrs. Maryam Rajavi, the National Council of Resistance of Iran (NCRI)’s president-elect, has said consistently that the regime’s twin leaders, Ali Khamenei and Hassan Rouhani, consider the lives and well-being of the Iranian people as worthless. She says that the regime’s only aim is to maintain its rule and protect itself against the Iranian people’s revolt against it.