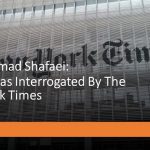 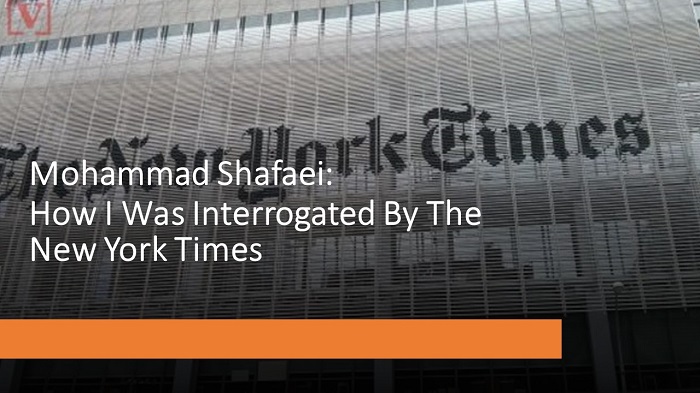 Mr. Mohammad Shafaei, in a report published recently as a dedicated member of the People’s Mojahedin Organization of Iran (PMOI/MEK ّIran), has quickly learned that even supposedly more balanced newspapers like the New York Times have journalists that support the barbarity of the Iranian regime.

In an interview not too long ago journalists in their questioning tried to imply that the MEK Iran was too authoritarian to ever become a truly democratic force in Iran if it was voted in to replace the current despotic, theocratic regime. Mohammad felt throughout the interview that he was being interrogated and if he failed the test would be imprisoned because of his membership of the MEK Iran.

It seems the media has distorted facts about #MEK, the main opposition group to the current #Iran regime, as revealed in the Feb 16th @nytimes article by Patrick Kingsleyhttps://t.co/q3O6ubFc71#FakeNews pic.twitter.com/aUFv9uN7XV

This discussion took place in January at the MEK Iran base in Albania where a contingent of public figures and journalists were invited from around the world to visit. It houses thousands of exiled Iranians who would fear for their lives if they were living in Iran during current times. This is all because they do not support the autocratic power of the mullahs and simply want to return the country to a state of free democracy where people can express their thoughts and vote for whom they wish without being imprisoned, tortured or killed for pursuing freedom for the Iranian people.

Mohammed, following the brutal questioning, looked back to when he was 8 years old in 1981, a time when the MEK Iran was active in Iran but their lives were always under threat. He alluded in his report to when six of his family members were murdered just because they supported the opposition Mujahedin-e Khalq (MEK Iran). He reported how he managed to escape Iran to the U.S., where he stayed in Greensboro, North Carolina. He also said that he had a lot of opportunities because he scored so well as a pre-med student at the University of North Carolina at Greensboro. Money didn’t talk for him, he said. Instead, in1995, with the destiny of his mother country never out of his mind he decided to join the MEK Iran and fight for the freedom of the Iranian people.

Another example of how the New York Times @nytimes sides with our adversaries rather than support American policies against tyrant regimes. https://t.co/IEsTU0SALl

In his report, he quickly reminded the readers that the NYT interview devastated him as the journalist tried to delve into his personal life making hurtful allegations. It was as if this was more important than his choice to fight for freedom for his people. Even in the final article that appeared in the NYT, there was nothing mentioned about the sacrifices he had made since 1995 to fight for freedom and democracy.

Mohammad couldn’t believe that the NYT failed to mention the memorial in the museum that the journalist saw which paid tribute to the 1,500 protesters who were slaughtered in November in Iran by the mullah’s regime that has imposed itself by force on the people so it could remain in power since 1979.

Mohammad reminded his readers how the Revolutionary Guard (IRGC) murdered his mother because she refused to take part in a TV interview denouncing the MEK Iran.  Years later, he says how proud he was of his mother’s action. He said he was glad he never told this story to the NYT journalist as it would probably have been reported that she had put her beliefs before her son which would have been a heartless thing to do.

The NYT isn’t new to its view on Iran and has wholeheartedly supported the U.S. foreign policy of appeasing the mullahs ruling Iran. This is so against what the Iranian people want as has been seen in two recent uprisings, one in 2018 and the other in November 2019 as well as the January uprisings.  Mohammad ended his report by saying that the NYT, by demonizing the MEK Iran, has pretended that there is no viable alternative to the current regime and the people aren’t even interested in more freedom and democracy. This is giving a license to the mullahs to continue their hostile regime with no end in sight and the chance of more arrests and imprisonments of those rising against the regime in the future.