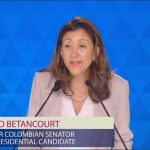 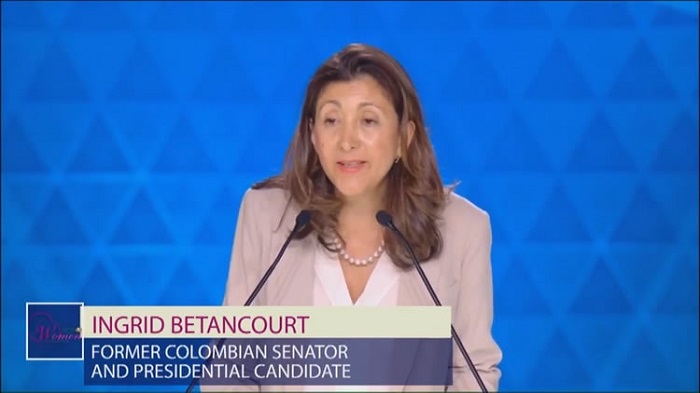 The former Colombian Presidential Candidate, Mrs. Ingrid Betancourt, has expressed her heartfelt support for the struggle by Iranian women against the Iranian regime and its anti-women laws. She made a speech that was made on the occasion of International Women’s Day. The event was attended by Mrs. Maryam Rajavi, the National Council of Resistance of Iran’s President-elect, as well as supporters of the people’s Mojahedin Organization of Iran (PMOI/MEK Iran).

“In Iran, the regime tries to silence the reality of the spread of the virus in order to have people voting, isn’t that criminal how can we continue to pretend we’re blind to what is happening? and today we understand that the  MEK Iran and Maryam Rajavi are what the mullahs fear the most and that’s why we have to be in full solidarity with all these women that are here today and in other parts of the world with the MEK Iran struggling to have the reality of what’s happening in Iran known by others.”

The text of Mrs. Betancourt’s speech is given in full below:

My dear friends what a nice opportunity to see so many faces that I love, that I recognize from all the meetings we have had some years; and many others that I am so happy to see every time I come and to be here in this country which has been at the avant-garde of the women’s struggle and the defense of equality and women’s rights in the world.

So it’s special to be here because I think that we are really living in the world a very special moment and I would even dare to say that perhaps we are witnessing a revolution in the way women live among the community of human beings.

I say this because you see when there is a revolution we all have the impression that we do two steps forward one step back and when I see what’s happening, for example, the “Me Too” movement which is s step forward and then the leadership in the world of alpha male leaders with this misogynistic tinge that makes us wonder and think consciousness that we have to still be fighting for equality amongst women and man.

This is the world we’re facing and truly if we want to be doing something significant in this world I think that our best contribution is to support a regime change and what has become the epitome of the misogynistic regime and this is the regime of the mullahs.

It has also the downside that we know that every time we are gaining some ground we have to face the backlash of this regime trying to stop the MEK trying to tarnish the image of the only prevailing organized alternative to this regime.

Why do I say this because I think there was a turning point in November last year when we saw the Iranian society becoming like a powder keg and this because remember when the regime decided to triple the price of the fuel and its sparkles a protest among the traditional supporters of the regime. We’re talking about the small farmers we’re talking about the unemployed people we’re talking about the dwellers in the shanty towns in Tehran protesting in a very violent way torching and destroying everything that could symbolize the regime and they were asking for regime change. They were not asking for putting the price at a lower level they were asking to topple and overthrow the mullahs’ regime.

The response of the regime was bloodshed in a couple of days the Revolutionary Guards killed 1500 people poor people unarmed, people hungry and people asking for justice in general in January suddenly we saw another uprising a different one but complementary to the one we saw in November it was with the downing of the Ukrainian airliner and the protest began with university students young people professionals intellectuals small businesses in the middle class it was not now the poor people it was the impoverished middle class that was turning up to take the streets and protest and they were not asking for the truth about the plane because everybody knew what was happening. No, they were asking again for regime change and they were very clear in saying we want democracy it was not saying “oh we want to go back to the era of the Shah” no it’s not about coming back it’s about moving forward to a true democracy

Then came elections and then [regime’s supreme leader Ali] Khamenei lets elections and this was last week Friday and in spite of all the efforts, the regime did in trying to push people even menacing the crowds and the population in order to have a good turnout in the in casting votes when you cross the figures between what was observed in the places ended and the figures the own official figures that the regime produced.

It’s possible to say and to conclude that ninety percent of eligible voters boycotted the elections that is the truth and what is inclusive is that Maryam Rajavi had called for that boycott. She was the one calling the population to abstain from going and cast vote as a protest in order to honor the 1500 Iranians that were murdered in the street some months before in order also to make visible the sham the farce of an election where people couldn’t even become candidates if they wanted it was only the ultra-conservatives that the regime allowed to enter into the elections Maryam Rajavi concluded and I’m with her in this that really elections in Iran.

Well, we saw elections through elections real elections in November and in January with the uprisings, those were the real votes, not the sham election.

What are our conclusions first that we know that what with trying to read the results as they have done the regime is producing its own death there are it’s not possible for them to continue to lie inside Iran and internationally the Masquerade that these guys is into a fall what is it for us here in the western world here where we have freedom where we can speak first.”

We have to ask our leaders to not continue shaking the hands the bloody hands of the leaders of Iran who are murdering their own people we have to ask them to respect the resistance and the call for liberty and for democracy that we’re hearing here from Iran; to respect the lines of so many people that were manipulated even during the elections can you believe that we were all talking about the coronavirus.

In Iran, the regime tries to silence the reality of the spread of the virus in order to have people voting, isn’t that criminal how can we continue to pretend we’re blind to what is happening? and today we understand that the  MEK and Maryam Rajavi are what the mullahs fear the most and that’s why we have to be in full solidarity with all these women that are here today and in other parts of the world with the MEK struggling to have the reality of what’s happening in Iran known by others.

All these women that have learned to take leadership of this generation of women that come with Maryam Rajavi and that have shown the world that Iran or not the mullahs that Iran are men and women together and women in the role of leadership with the incredible outcome of having been able after all these years to prevail against the crime even the crimes here in our soil in Europe.

A year ago do you remember there was an attempt to kill all of us all the ones who were present in in the reunion of the MEK Iran in Paris in June two years ago even with all the things they have done the crimes of terrorism the MEK Iran is still alive and for the women of Iran this is the best guarantee that one day the rights will prevail, Because I have this profound admiration for Maryam Rajavi and her plight and for all of you Women and man of this organization which I truly believe of the most awesome freedom fighters that we see today I am very honored to introduce Maryam [Rajavi] my friend that I admire Maryam [Rajavi’s] message to us all today.