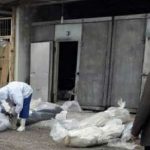 MEK Iran: More than 2,600 Fatalities from Coronavirus in Iran

Written by Amineh Qaraee on March 9, 2020. Posted in NEWS

The mullahs’ regime has made the whole situation worse by masking the seriousness of the problem. They simply won’t admit the number of people who have died due to the virus.

An outbreak of coronavirus in Iran is far more serious than the regime is revealing. It has become so serious that according to the People’s Mojahedin Organization of Iran (PMOI/MEK) the 2,600 fatalities so far have affected 115 cities spread across 30 provinces.

Just in the past twenty-four hours at least 300 people have lost their lives to this deadly virus in the following districts:

The mullahs’ regime has made the whole situation worse by masking the seriousness of the problem. They simply won’t admit the number of people who have died due to the virus. This morning a report about the death rate was dispatched to Khamenei’s office by Gilan Province  Minister of Health representative Mohammad Hossein Ghorbani. This was a secret report revealing that 408 people had died in Gilan which included six doctors. There have been lies and contradictions regarding the number of deaths and despite the number in Gilan the deputy health minister reported earlier today that the total number of casualties nationwide was just 200.

In a secret report to Khamenei's office this morning, Mohammad Hossein Ghorbani, the representative of the Minister of Health in Gilan Province, wrote that by Sunday, the death toll in Gilan had reached 408, including six doctors. #coronavirus #COVID19 pic.twitter.com/3vXq18fJVS

Qom should have been quarantined earlier

Alireza Rahimi, a member of the Majlis (Parliament) leadership in a report issued by ISNA the State-run news agency on March 7 questioned why the recent Majlis election had taken precedence over the coronavirus outbreak in Qom.

Meanwhile, Ali Najafi Khoshroodi, Mazandaran deputy in regime’s parliament has reported that the spread of the coronavirus in Mazandaran Province, and in particular in Babol was at breaking point. Already there is no more room in any of the 3 major hospitals and there were no resources to implement preventive measures including the supply of drugs.

In Golestan Province all of the hospitals are full and the Province’s International Exhibition Center is now acting as a field hospital taking in the overflow of patients. As one would expect the people are angry but both the Revolutionary Guards and The paramilitary Basij are out on the streets pretending they are representing the Coronavirus Combating Campaign but they are really there to quell protests.

Many political prisoners have coronavirus symptoms like a high fever and severe coughing but nothing is being done to help them. The guards are too afraid to enter the cells when conducting their counting routines. There are no coronavirus testing facilities in the prison and there are no products available to the prisoners to help them disinfect themselves.