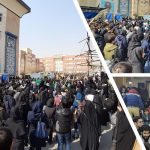 Written by Mohsen Aboutalebi on February 18, 2020. Posted in NEWS 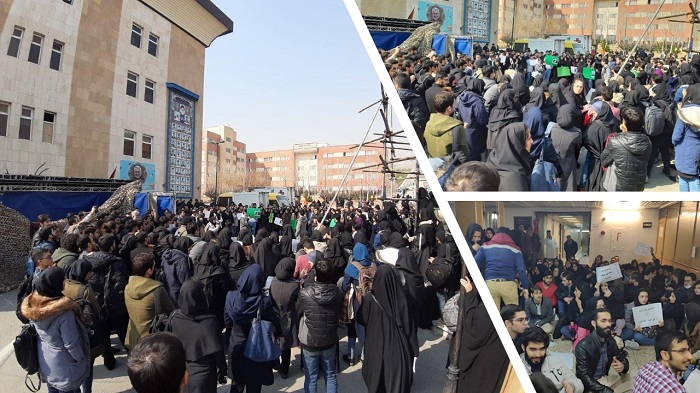 Iranian students hold gatherings against the regime in different universities.

It has been 40 days since the Islamic Revolutionary Guard Corps (IRGC) shot down the Ukrainian airliner. As is customary in Iran, families and loved ones celebrate the life of the deceased by holding a memorial on the 40th day since their death.

To mark the 40th day since the airline tragedy, people across Iran have been holding protests to condemn the Iranian regime for its actions that led to such an incident.

Students in Tehran gathered in the city and were heard calling on the people to boycott the current elections. They highlighted that the corrupt electoral process is just another way for the regime to control its flow of finances, while the people continue to suffer in poverty.

The students also pointed out that the notorious IRGC is nothing more than a murderous mob. The IRGC has been involved in many acts of suppression against the people, resulting in many injuries and deaths in the past few months alone. Furthermore, the IRGC has been suppressing people abroad too, most recently in Iraq. Not only is the Iranian regime terrorizing people at home, but it is also terrorizing people abroad too.

The people of Iran are fed up with the regime’s belligerence and in November last year, they took to the streets in what became a massive uprising.  The protests spread like wildfire and the regime was bewildered by the scale of the unrest. It thus decided to carry out a massive crackdown on protesters, hoping that the people would feel threatened and return home. However, this was not the case and the people remained defiant.

The #Iran regime is clearly trying to cover up and minimize its involvement in the air tragedy. However, its denials and misinformation show that the regime has more to hide than it cares to let onhttps://t.co/O1sAP4ZWIz#ukrainianplanecrash #IRGC @USAdarFarsi pic.twitter.com/xCATksZpBM

As a result, the country’s security forces were ordered to use brutal force on the people. Tens of thousands of people were arrested, thousands injured and more than 1,500 died because of the brutality and violence they were faced with.

The protesters in Tehran remembered the deaths of those protesters and vowed to make sure that they did not die in vain. They also called on the regime to release all of those that were arrested and imprisoned during the November uprising.

As is becoming customary when there are significant numbers of people participating in anti-government demonstrations and protests, security forces and undercover agents were present. The students did not let themselves become intimidated and they showed their determination.

At the weekend, many Iraqi students across Iraq held protests regarding their situation. They protested against the interference of the Iranian regime and the corrupt politicians in Iraq that are acting as puppets of Iran. There were clashes between protesters and members of militias (many supported by Iran). Reports indicate that tear gas, smoke grenades, and hunting rifles were employed by militia members.