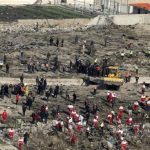 Written by Mohsen Aboutalebi on January 11, 2020. Posted in NEWS 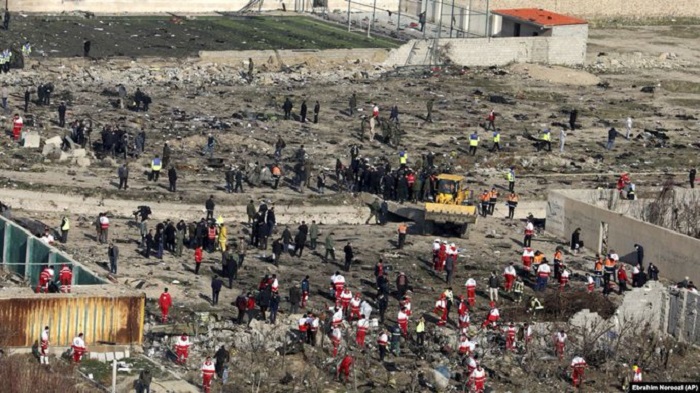 Scene of the Ukrainian plane crash. The Iranian regime bulldozers clear the scene from the evidence that could reveal the regime’s role in the downing of the Ukrainian passenger plan that killed 176 people on board the airplane- January 8, 2020

Yesterday, after days of stonewalling, deceptions, and denials, the Iranian regime’s president, Hassan Rouhani, reluctantly admitted that an IRGC air defense unit had shot down a Ukrainian passenger plane, killing all 176 people on board, on Wednesday, January 8, 2020. Rouhani claimed “human error” by the IRGC’s surface-to-air missile unit to coverup the regime’s culpable coverup, and at the same time tried to put the blame on U.S. forces for causing “an atmosphere of threats and intimidation“ by eliminating the threats posed by Qassem Soleimani.

Hours before Rouhani’s announcement, the Iranian regime’s Civil Aviation Organization published a report entitled, “Aircraft Accident Investigation Board Preliminary Report” dated January 9, 2020. In this report there is no mention of the missile attack and the entire incident is described in a way that a technical failure has caused the plane to catch fire, change the route, and explode when it hit the ground.

“According to witnesses (people on the ground as well as the crew of passing flights in higher altitudes observing and reporting the event), a fire appeared on the aircraft which was intensifying, then impacted the ground causing an explosion.”

Abbas Mousavi, the spokesman for the Iranian regime’s foreign ministry, also denied any role for the regime in this crime, and rejected Canada’s announcement about a possible missile attack on the plane, during his news briefing on January 9, 2020.

Mousavi said: “News of the plane crash is ‘suspicious hype’… We urge the Prime Minister of Canada and any government that has information on this subject to share the information with Iran… Reading the black box takes a couple of months”, he added.

Canada’s Prime Minister, Justin Trudeau, in a public announcement told the Canadian public of the intelligence report from multiple sources indicating that “the (passenger) plane was shot down by an Iranian a surface to air missile”.

Finally the Iranian regime was forced to admit to the crime, but tried to put the blame on the U.S.

Maryam Rajavi, the President-elect of the Iranian opposition, the NCRI, called the forced admission of the downing of the passenger plane, “another major crime by the religious fascism ruling Iran, which the people of Iran will neither forgive, nor forget.”

Regime’s forced admission to shooting down the Ukrainian airliner that killed all the passengers is another great crime, which the Iranian people will neither forgive nor forget #UkrainianPlane #Iran

“The Iranian regime’s President Hassan Rouhani and the Command Headquarters of the armed forces were forced to admit this morning, after 72 hours of stonewalling, deceptions and outright lying, that a Ukrainian Airlines passenger jet had been shot down by an IRGC surface-to-air missile.”

Mrs. Rajavi’s statement explains that the reluctant admission by Rouhani came after “widespread protests and intelligence disclosures, the release of pictures and video clips and confirmation by the United States, Canada, the United Kingdom, NATO, and many other international sources. In the past three days, many of the regime’s leaders, including Rouhani’s spokesman and the head of the civil aviation organization brazenly claimed that the plane had crashed due to mechanical failure.”

The regime had given advance warning about its missile attack on American bases to the Iraqi government & its military & through them to the US. But did not issue any advance notice to our compatriots & did not cancel passenger flights #Iran

MEK Iran reported yesterday, that while the Iranian officials claim that the incident was due to a technical failure; reports indicated that the airplane had been targeted by the regime’s anti-aircraft units.