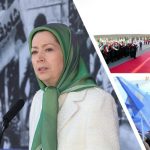 Written by Amineh Qaraee on February 13, 2020. Posted in NEWS 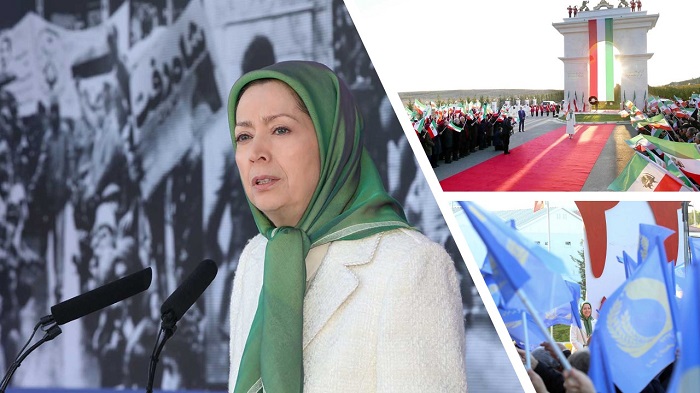 Mrs. Maryam Rajavi, President-elect of the National Council of Resistance of Iran (NCRI), delivered a speech on Tuesday commemorating the anniversary of the February 1979 Revolution and the February 1982 martyrdom of MEK Iran members who opposed Khomeini’s rule. In the second half of her remarks, Mrs. Rajavi explained why the Iranian people reacted to the tyranny of the Shah and the suppression of the mullahs with active resistance instead of passivity.

Maryam Rajavi delivers a speech commemorating the anniversary of the February 11, 1979, Revolution in Iran and the February 8, 1982 martyrdom of #MEK members who protested against Khomeini’s rule- Ashraf 3, Albaniahttps://t.co/XIRjNlhwPR#Iran #FreeIran2020 @USAdarFarsi pic.twitter.com/25gwOOyf1u

MEK’s Role in the Iranian Resistance

“The MEK represented the decisive, resounding and boisterous “No!” of the Iranian people against a violent tyranny that had sprung up from the depths of history,” she said.

The MEK Iran refused to support Khomeini and his clerical regime in their misogynistic goals. They did not vote for the constitution, with its principle of absolute clerical rule, and they refused to accept Sharia law and the restriction of basic freedoms. They rejected the regime’s rationalization that the loss of freedom would somehow further the goal of fighting the Western world and imperialism, said Mrs. Rajavi.

On June 20, 1981, the MEK Iran “cemented the decisive demarcation between the Iranian people’s front and that of the clerical regime” with a massive anti-regime uprising. This laid the foundation for the eventual overthrow of the mullahs and a future free Iran.

“So, where can we witness the crystallization of Iranian society’s awareness in this blood-stained confrontation and after the mullahs’ rule?” Mrs. Rajavi asked.

The answer may be seen in the MEK Iran, the National Liberation Army, the Resistance Units and rebellious youth, and the uprisings across Iran, she said.

“The future of Iran, under any circumstances, will be based on equality between women and men,” she emphasized.

“The future of Iran will definitely unfold with the rejection of religious dictatorship and compulsory religion,” she added.

Mrs. Rajavi also called attention to the importance of the increasing awareness of the NCRI as the democratic alternative to the clerical regime and mentioned the role of Massoud Rajavi in making that a reality.

She then went on to discuss the anti-regime uprisings in November 2019 and January 2020, saying: “The two major uprisings in recent months demonstrated the blazing readiness of the Iranian people to overthrow the regime. They exhibited the readiness to burn down the entire edifice of the regime and all the evils associated with a theocracy; and a readiness to take a great political and social leap that can shape new arrangements on the basis of freedom and democracy.”

More than 1,500 protesters were killed by regime forces in the November Uprising. “The flames arising from their blood inspired the January 2020 uprising” proclaimed Mrs. Rajavi.

The uprisings demonstrated that the desire to rise up against the regime has permeated every sector of Iranian society, and the Resistance Units and rebellious youth are preparing the path for bigger and more decisive uprisings, she stressed.

Mrs. Rajavi said that the clerical regime will never be able to recover from the damage done by the uprisings.

“They cannot restore their lost stability and equilibrium. And they cannot prevent the defections and internal erosion within the regime, the IRGC, and the unpopular Basij,” she said.

“This is especially true now that Iraq has also been engulfed by uprising and rebellion and Khamenei can no longer rely on Iraq as a strategic extension of his regime,” Mrs. Rajavi noted.

“The uprising of the heroic people and youth of our neighboring country Iraq has dealt another major blow to the clerical regime and has closed the mullahs’ route to escape their eventual overthrow,” she added.

Mrs. Rajavi moved on to the topic of the upcoming parliamentary election in Iran, calling it a sham election meant to postpone the people’s rage against the ruling regime.

“The tensions, weaknesses, and chaos prevailing the regime’s parliamentary elections are the outcomes of these uprisings, which have shaken the ground underneath the mullahs from Beirut to Baghdad and to Tehran,” she stated.

Mrs. Rajavi pointed to the increase in infighting between regime factions, noting that Khamenei’s Guardian Council disqualified most of his rivals’ candidates, including 90 sitting members of Majlis (parliament). She also described the rival faction’s attempts to humiliate Khamenei and call the elections into question.

“The Iranian Resistance has on numerous occasions revealed that, in addition to systematic fraud, the regime announces the results of every sham election after multiplying the number of fabricated votes in the last stages conducted at the Interior Ministry,” said Mrs. Rajavi. “Now, the regime’s own president admits to these fabricated numbers at the elections office of the Interior Ministry. He recently said: ‘What happens when in the end, they want totally (the votes). … Many elections face problems during the vote count.’”

Mrs. Rajavi said that every regime election has been plagued by vote-rigging but underlined the fact that “the core issue is that the intention behind such fraudulent and sham elections is to hide the fact that the people’s sovereignty has been stolen. The main purpose of the regime’s sham elections is to try to delay the burning rage against the illegitimate rule of the mullahs. The main purpose of this show is to conceal suppression, murder, and plunder.”

She added: “The crux of the matter is to conceal the suffering of a nation, a majority of whom have slid below the poverty line, 20 million of them live in the fringes of cities, and 10 million are unemployed.”

Mrs. Rajavi argued that any parliament formed based on this election is one of “barbarism, lies, and evil.” She further stated that the regime’s laws serve no purpose other than increasing suppression, misogyny, and plunder, and are therefore null and void.

“The Iranian people have cast their real vote during the November 2019 and January 2020 uprisings. This vote is summarized in the slogans of ‘Down with the principle of velayat-e faqih!” ‘Death to Khamenei!’ and ‘Death to Rouhani!’  And on this basis, the people will boycott the mullahs’ illegitimate parliamentary elections more than ever before, Mrs. Rajavi declared.

“The boycott of the sham elections is a patriotic duty and the bond of the Iranian people with their martyrs, especially the over 1,500 martyrs of the November uprising. This boycott sides with the demands of the arisen people and students in January for the overthrow of the entirety of the illegitimate regime of the velayat-e faqih,” she continued.

“Our vote is overthrow! she exclaimed.

No to Shah, No to Sheikh!

In the final portion of her speech, Mrs. Rajavi drew parallels between the “ceaseless protests” that led to the overthrow of the Shah in 1979 and the current uprisings. She assured the people of Iran that their protests would lead to the mullahs’ overthrow and a free Iran.

“In December 2017, protestors announced the end for the regime’s violent factions, from ‘reformers’ to ‘hardliners.’  In November 2019, they rained down the fire of the people’s rage on the entirety of the regime. And, in January 2020, they said: we want neither the crown nor the turban,” said Mrs. Rajavi.

“Now, it is high time to establish an Iran free from any form of dictatorship; an Iran devoid of torture, execution, and religious and gender discrimination,” she added, referring to her ten-point plan for Iran’s democratic future.

“The time has come to establish a republic based on the free vote of the Iranian people, based on the separation of religion and state, and based on pluralism, justice, and equality,” she continued, also referencing her plan.

“Members of the MEK Iran have planted the seeds of uprising and revolution across Iran by sacrificing their own lives. This is a resistance and uprising that will triumph,” Mrs. Rajavi emphasized.

“Ready to sacrifice, we will rise up, and we will be triumphant,” she concluded.