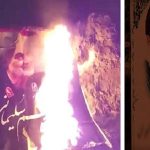 Written by Esmail Mohades on January 16, 2020. Posted in NEWS

At the beginning of the year, the United States launched a drone strike in Iraq with the aim of eliminating terrorist targets. The United States succeeded in targeting top terrorist Qassem Soleimani, the leader of the Quds Force branch of the Islamic Revolutionary Guard Corps (IRGC).

The regime responded furiously to the death of one of the most important officials in the regime. Qassem Soleimani has been leading the regime’s extra-territorial mission, spreading chaos across the region and pursuing the regime’s goals.

The regime’s propaganda machine has tried to portray the Soleimani as a national hero. It appeared on a superficial level like the whole country was mourning his death, but this could not have been further from the truth. The people of Iraq and Syria, as well as Iranian diaspora, openly celebrated the death of Soleimani – cheering in the streets.

The people of Iran, on the other hand, were faced with a massive security presence in the streets. This did not stop the Iranians celebrating – they partied in their homes. Social media was awash with photos and videos of their joy.

The main opposition to the Iranian regime, the People’s Mojahedin Organization of Iran (PMOI / MEK Iran) is also encouraged by the news of the death of Qassem Soleimani. The MEK Iran has been campaigning for regime change because it knows – as do the people of Iran – that it is the only way in which the people of Iran will ever be able to experience true freedom, democracy and the respect of human rights.

Defiant youth all over the country have been torching photos and images of Qassem Soleimani. Brave protesters – young and old, rich and poor – have been voicing their support for the MEK Iran and have been calling the regime out for its idolization of Soleimani who they describe as the “child killer” and the country’s top terrorist.

MEK Iran supporters and protesters in Tehran were heard calling him out as the criminal of the century.

In other cities, the people were torching banks and other institutes that are controlled by the corrupt regime.

As is the case during protests and anti-government demonstrations in the country, security forces opened fire. A number of people have been killed and many injured.

The ordinary people of Iran are being encouraged by the MEK Iran and the Resistance Units and are following their example – making their discontent known and not being intimated into silence or inaction.

The founder of the regime Ruhollah Khomeini and current Supreme Leader Ayatollah Ali Khamenei were also the subjects of the people’s anger. In Sabzevar and Shahr-e Kord, protesters set fire to posters of them.

The MEK Iran supporters will not let the world believe that Qassem Soleimani is seen by the people of Iran as a national hero. They are risking arrest, imprisonment, torture and even the death penalty to ensure that their voices are heard.