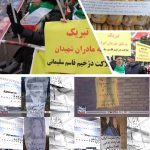 Written by Esmail Mohades on January 5, 2020. Posted in NEWS 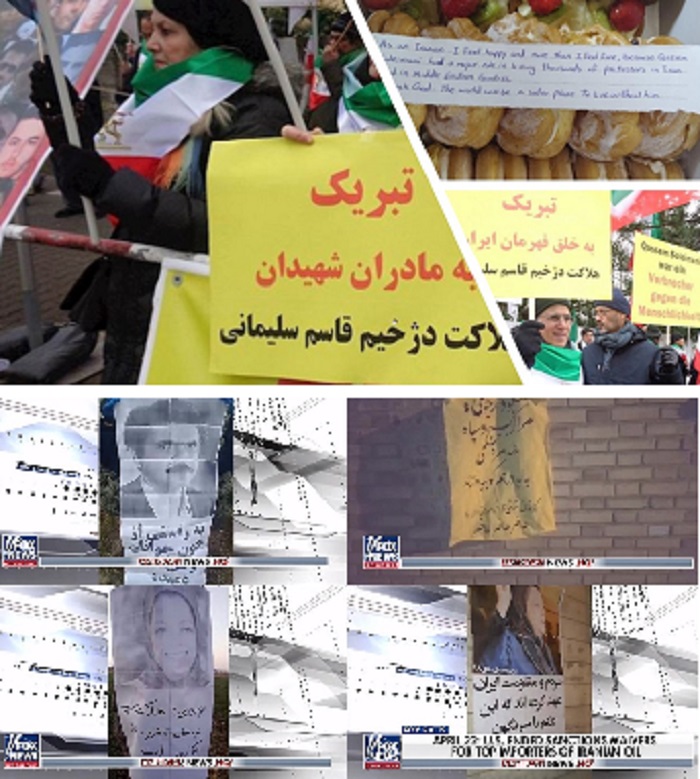 “Iran: Public Welcomes Soleimani’s Death”  is the title of a new statement by The Secretariat of National Council of Resistance of Iran (NCRI) The statement reads in part:

“On Friday and Saturday, January 3 and 4, 2020, Subsequent to the elimination of the notorious IRGC’s Qods Force commander Qassem Soleimani, Resistance units posted banners carrying pictures and messages of Mrs. Maryam Rajavi, the President-elect of the National Council of Resistance of Iran (NCRI), and Mr. Massoud Rajavi, the Leader of the Iranian Resistance, in Tehran and other cities, including Mashhad, Tabriz, Karaj, Hamedan, and Khorassan Razavi Province.”

“The banners read: “Soleimani’s elimination expedites regime’s overthrow,” “The Iranian people and Resistance have pledged to overthrow this regime,” “Rest assured that our nation will triumph,” “Iran will be free through the uprising and Resistance units,” “Bassij and IRGC centers must be demolished,” “The rebellion continues,” and “Flowers have blossomed from the blood of the martyrs,”

Meanwhile, the mullahs and their apologists in Main Stream Media (MSN) like CNN, NY Times and NBC News in the US are portraying Qassem Soleimani, a criminal, a “Child Killer”, a war culprit in Syria and Iraq, and a prime executioner in Iran, as “revered and national hero”.

What was the reality of Soleimani?

While people of Iran are living under an unprecedented dictatorship that even expressing their feelings would result in their detention and torture and possible execution, the Iranian regime and its lobbyists try to portray Soleimani as “hero”.

Unlike what the mullahs’ lobby, NIAC and other advocates of Iran’s dictatorship are portraying, the only other news that might make people in Iran, Iraq, Syria, Lebanon, happier than the news of Soleimani’s death, is Iran regime change. Nevertheless, Soleimani’s death is a big move in that direction.

Public reaction to the elimination of Soleimani

People of Iran and all countries across the region were very happy to hear that the killer of their loved ones is death and they presented this feeling in different ways.

Locals in Ahvaz, southwest Iran were dancing and celebrating, and women were handing out pastries to the people on the streets.

Locals in Ahvaz, SW #Iran dancing and celebrating the death of IRGC commander Soleimani. It's worth noting that the IRGC slaughtered 40-100 Arab-Iranian civilians in Mahshahr during Nov. 2019 #IranProtests. Many of them have yet to be identified. pic.twitter.com/DmDqFSu82T

Just last month in November 2019 protests in Iran, the IRGC slaughtered over 100 Arab-Iranian civilians in Mahshahr. Many of them have yet to be identified.

Iranian diaspora and supporters of the main opposition, Mujahedin-Khalq (PMOI/MEK Iran), who are living in democratic countries around the world and unlike people inside Iran, can express their feelings, celebrated Soleimani’s death in their cities. It is worth noting that MEK Iran members’ homes in Iraq, Camp Ashraf, and Camp Liberty were attacked seven times by the proxy forces of Soleimani, resulting in the death of over 200 MEK Iran members and over 1600 injured.

A group of Iranian-Canadians gathered at the Mel Square celebrating the death of Qassem Soleimani; they chanted: “what do we want? Regime change in Iran by the people of Iran” and “they are terrorists; they must go”.

#Iranians in #London also celebrated the elimination of the world's number one terrorist #QasemSoleimani. #FreeIran2020https://t.co/IQSlYEPxmR#Soleimani

Upon hearing the news of Soleimani’s death, the celebration also took place in Ashraf 3, the MEK’s compound in Albania, where the main freedom lovers, strive for free Iran.