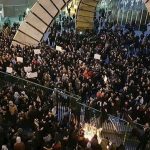 Written by Esmail Mohades on January 15, 2020. Posted in NEWS 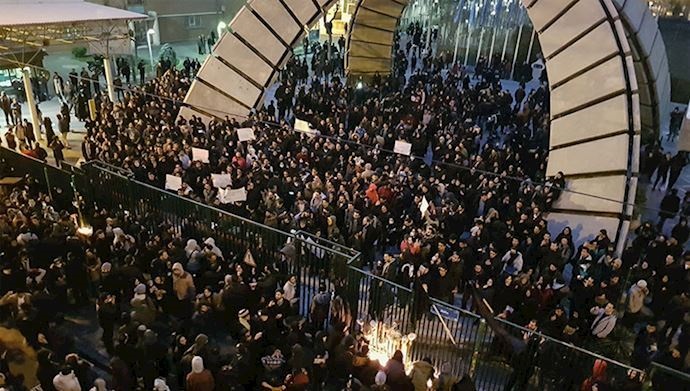 Medical students at the University of Tehran held a protest in front of the university mosque, where they chanted anti-regime slogans.

This round of protests began on Saturday after the Iranian regime admitted to shooting down a Ukrainian passenger plane that took off from Tehran, killing all 176 people on board, mostly Iranians and many students. The protests soon spread from Tehran to other universities and other cities, picking up speed as the demonstrations became about more than just the plane crash and turned into an uprising against the regime, just like those in November.

The domestic situation in #Iran is getting increasingly tense as Iran’s international relations continue to go in the same directionhttps://t.co/i7203goIJu#IranProtests #FreeIran2020 #MEK @USAdarFarsi pic.twitter.com/flsEq2qrOn

Students at the National University held a rally to protest a gathering of Bassij paramilitary agents, posing as students, and the agents were forced to flee. The real students chanted the slogans, “If you are a student, why is your face covered?”, “Be afraid, be afraid, we are all together”, and “Our enemy is here, they lie that it’s America”.

While art students at Pardis staged protests where they chanted slogans like, “We are empty-handed, put away your batons” and “death to liars”.

Amir Kabir University students chanted anti-regime slogans, like “Mullahs must get lost”, as they called for the overthrow of the mullahs. Security forces tried to disperse the crowd, but the students resisted, chanting “You are ISIS to us” and “Shame on you!”

Mrs. Maryam Rajavi, President of the National Council of Resistance of Iran (NCRI), praised the protesting students, and called on all Iranian, especially other young people, to support them. She further urged the United Nations Secretary-General, the UN Security Council, the European Union, its member states, and all international groups supporting human rights to condemn the vicious suppression of protests, take immediate steps to free detainees, and send an international delegation to visit prisons and prisoners arrested during the uprising.

FOX NEWS- Maryam Rajavi: The international community must support the struggle of the Iranian people and Resistance to overthrow this regime.
This is the only way with which the world can rid the Middle East of terrorism, warmongering and religious fundamentalism #IranProtests pic.twitter.com/mHOk3XXk0P