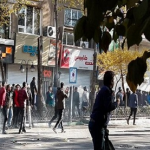 Written by Mohsen Aboutalebi on December 31, 2019. Posted in NEWS

With more than 1500 protesters killed in 191 cities across Iran during the protests sparked by a threefold rise in fuel prices in November, Iran’s new uprising is far from fading away.

More than 4000 protesters which were wounded during the unrest are still recovering, most of them in hiding.

Last Thursday, the Iranian regime had to mobilize all security forces as well as good parts of its IRGC and army in fear of renewed unrest during ceremonies announced to be held, according to Muslim tradition, on the 40th day of the victims’ death. Many ceremonies were held anyway, according to reports by the Mujahedin-e Khalq (PMOI/MEK Iran), in different cities with video clips and photographs covering social networks.

The brave woman holds a sign in memory of the martyrs of November #IranProtests. She shouts,"Do not be afraid, we are all together". A while back, repressive regime forces arrested several mourners, who had gathered at the main cemetery in Karaj. #FreeAllProtesters #Internet4Iran https://t.co/IyhVUqf9z1

Several demonstrations were held simultaneously, by MEK Iran supporters, around the world especially in European Capitals. Paris, London, and Berlin were thus witnessed to demonstrations held by the Iranian community answering MEK Iran’s call in solidarity with the martyrs and asking the arrested to be released.

Demonstrators called on the German gov. to formally condemn the bloody repression of Nov.#IranProtests by the Iranian regime, as a case of #CrimesAgainstHumanity.#FreeAllProtesters #Internet4Iran @StateDept @GermanyDiplo @RichardGrenell pic.twitter.com/65zSQ6vsuS

US Secretary of State Mike Pompeo on Friday slammed Iran for using “violence” and censorship to prevent memorials for those killed during the suppression of the protests.

“The Iranian people have the right to mourn 1,500 victims slaughtered by Khamenei during Iran Protests,” Pompeo tweeted, directly accusing Iran’s supreme leader Ayatollah Ali Khamenei. He was citing the number of killed according to the figure announced by the MEK Iran ten days prior to the tweet.

The Iranian people have the right to mourn 1,500 victims slaughtered by @khamenei_ir during #IranProtests. The regime fears its own citizens, and has once again resorted to violence and shutting down the internet.

The MEK Iran has also published the names of 615 victims out of the total 1500, with the list of identified martyrs growing every day.

12000 people reported arrested are still in custody. In a recent update on the protests, Amnesty International wrote on December 28: “As part of a violent and deadly crackdown, Iran’s authorities have been arbitrarily arresting thousands of protesters who are now at risk of torture and other ill-treatment.” The international Rights watchdog asked members to sign a petition calling for those arbitrarily arrested to be released.

At least three minors who were arrested by Iranian security forces during nationwide protests in November were sexually abused while in prison in the western city of Marivan, the Kurdistan Human Rights Network reported today.

With all the movement and International concentration on the event, Iran uprising is not going to lose steam, as the mullahs wish. A new up-flare is more than probable, and the regime’s problem is how to deal with such a phenomenon. Bare repression seems to have been used to its limits, so new movements cannot be suppressed in the same way unless the regime prepares itself for the most unprecedented international isolation ever experienced by it.